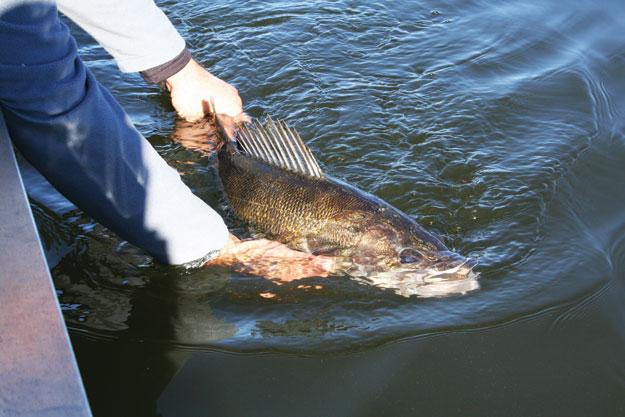 Where, when and how to catch river-dwelling walleye

Boating down a straight, fast-flowing section of the Athabasca River, I pointed to a sudden drop in water depth on the sonar. My fishing buddy Ray Kohlruss immediately turned the boat around, found the head of the pool and anchored. In less than five minutes after first dropping our jigs down to the bottom, we’d caught seven big walleye—and added another waypoint to our list of honey holes.

It’s unfortunate that anglers often overlook rivers as prime destinations for walleye. Caught up instead with fishing lake structure, they don’t even consider rivers as hot spots. That’s a big mistake. Think about it: A major river system undoubtedly has more surface area than most freshwater lakes you’d ever fish, increasing the odds it will also be home to trophy-calibre walleye. Here’s how to get catching in the current.

There are no huge secrets when it comes to fishing for walleye in rivers. Simply find deep pools and changes in the bottom structure (often from gravel to sand or mud) and you’ll find fish. So, how do you locate deep pools?

Start by searching for the confluence of two rivers, or where a creek or stream meets the main river. The water flowing in scours out the bottom of the river and produces prime fish-holding habitat. The other obvious place is on outside riverbends, where the current digs away at the bank and bottom as it’s forced to turn.

You also want to watch for colour changes in the water, with darker hues indicating deeper water. Current lines can likewise be telling. For example, when water is forced through a confined area, usually shallows, ripples show on the surface. In general, you want to avoid such areas, especially if they look as though the water is boiling—they’re too shallow to hold fish.

When the current flows through a deeper portion of the channel, however, it slows and relaxes. The fish prefer this relaxed water because there’s less flow and they don’t have to fight the current. Any spot where the current switches from fast to slow, or vice versa, is a good place to target, as walleye are attracted to these transition zones.

Likewise, I’m drawn to any structure in the river to investigate how it might also affect the current and attract fish. The best way to find productive spots is to cover a lot of water while watching your sonar. Touring around an island, for example, you might find a deep hole on its leading edge. Deep water can often also form next to the middle of an island, where the deflected current scours the river bottom. Similarly, when current is forced to change direction on the downstream end of an island, also known as the toe, it can create a pool.

The sides of sandbars are also key areas. For example, I fished a small sandbar this year with a short pool that was one to two metres deeper than the rest of the river channel. It held fish every time I visited it, and produced some lunkers late in the season. I can only hope that sandbar will still be there after spring’s high water.

On that note, it’s important to regularly check on your best locations to see if they’ve remained productive. When water levels drop or a river floods, the location and nature of pools can change—they can fill with sediment in slow-flowing water or become deeper in faster currents. The tip of an island might be productive one week, while the river channel below the island could be a hot spot the next.

If you’ve avoided rivers until now because you’re wary of moving water and the potential of hitting hidden structures in shallow areas, head out first with an experienced river angler to learn the ropes.

While you can find walleye in moving water all season long, autumn is my favourite time to hit the rivers. The pools are well defined and easier to locate, and rivers that are often silty throughout the summer due to spring runoff are usually clear by the time fall arrives. And with dropping water levels, the deep areas become obvious. Plus, the fish start to congregate in these deep wintering holes and the really big walleye magically show up from their summer hiding holes.

During the spring, meanwhile, make sure to look in the old oxbows that back-flood with water. Along with walleye, other gamefish such as pike use these productive, warm backwaters for spawning and feeding. With the increased flows in the river, the oxbows also provide quiet water, making it easy for fish to conserve energy.

You never know in which portion of a pool fish will be holding, so it’s important to cover the entire stretch of water. And in order to do that, you need to anchor above the top end, or head, of the pool, so you can start fishing where the water begins to deepen. Be sure to anchor with enough slack in the line to allow your anchor to catch firmly onto the bottom; allow too much slack, however, and you’ll drift below your targeted fishing area.

When it’s time to cover a new section of the pool, simply let out more anchor rope and let the boat drift downstream until you’ve reach the desired spot. Then start search casting all over again. Repeat the process until you’ve covered the entire pool and begin to drift back into shallower water. Fishing a pool this way, you’ll quickly learn the sweet spots where the fish hold and feed.

One of the best things about fishing for walleye in rivers is that you don’t need specialized gear. Medium-action rods and spinning reels spooled with Fireline are well suited to detect everything from subtle walleye bites to the composition of the river bottom you’re fishing over.

As for lures and baits, the best option is usually a jig tipped with a minnow or soft-plastic bait. In the spring and summer, I’ll also use dew worms and leeches. For the late season, I stick with the largest baits I can find. I prefer Zone R Nuckle Ball Jigs, which are designed to cut through the current and stand your bait upright once they find bottom. This is a big advantage over fishing with standard ball jigs. A bottom bouncer with beads and blades can also be used to efficiently cover a pool, as can crankbaits when you let the current pull them out and down behind the boat—and into the mouths of trophy river walleye.

When I’m fishing a river, my sonar is always on—you can find some hidden gems if you know what to look for. The key is to set your sonar to high sensitivity to clearly identify bottom types and structure. You can also set the depth alarm to ensure you don’t beach your boat on a hidden sandbar, but more importantly, it can help you find hidden fish-holding areas.

There are several options for finding productive water and deep pools even before you hit the river. Google Earth provides satellite images of rivers, often making it easy to identify structure and deepwater pools. And some smartphone and tablet apps, such as the Navionics Mobile App, feature maps and hydrographic information—invaluable resources for anglers looking for productive spots. Aerial photos and analog maps can also provide a great starting point. But remember, rivers are dynamic and always changing, so make sure your sources are as current as, well, the river’s prevailing currents.