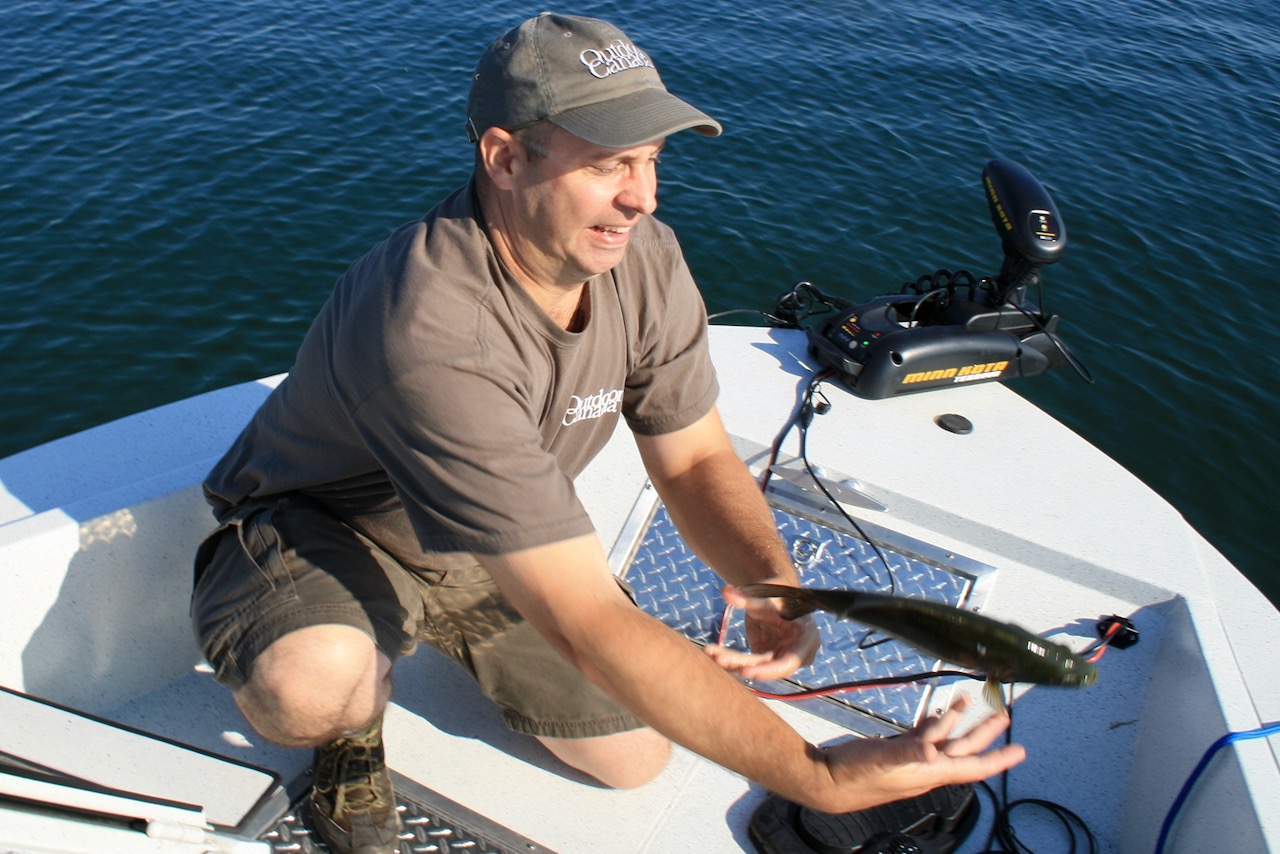 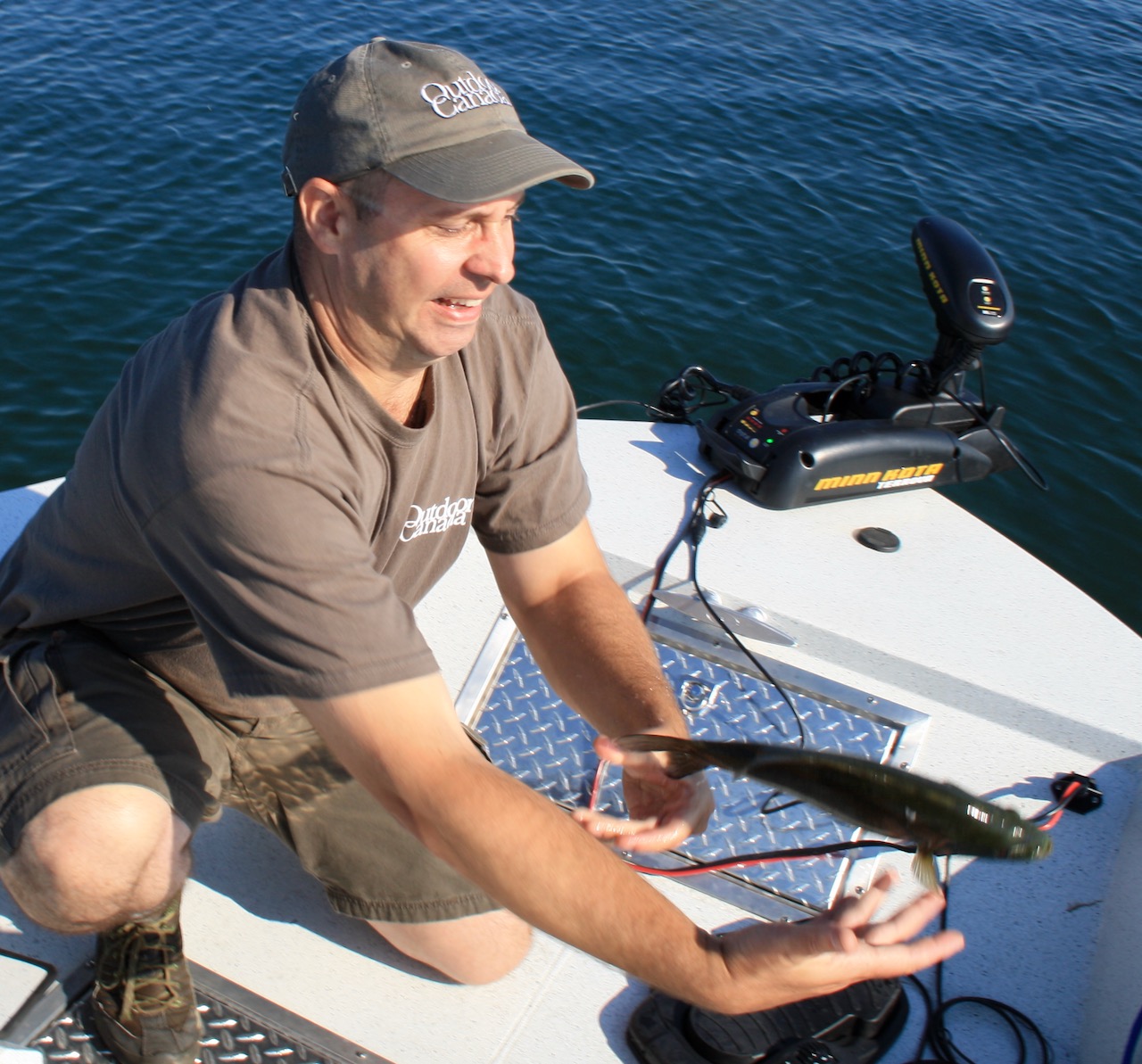 You would think our most memorable fish would be the ones we actually landed. Instead, they’re often the ones that got away, forcing us to learn some hard lessons in the process. I was reminded of that painful truth last summer when my grandson Liam and I were working our way along the edge of a cabbage bed shortly after the muskie season had opened.

In short order, I raised a mammoth chrome-coloured, thick-sided brute and led her alongside the boat—close enough that I could have reached out and touched her. That’s when I noticed she had her nose planted in the circular stream of bubbles spewing behind the Handlebarz Double 9 bucktail I was retrieving. On the first outside sweep of my figure-eight, however, she lazily veered away and slipped out of sight. No problem, I thought, we’ll return at last light and catch her.

So, on our way home several hours later, with the sun setting, we pulled into the weedy bay. To say we were on high alert is an understatement. Knowing the trophy muskie was likely still there, Liam and I were like high-strung English setters eager to flush a pheasant. We started working our plan to perfection—or so we thought.

I pitched my lure to a flat, sloping rock and watched the bait rotate and spin just under the surface. With the flat calm water and the angle of the sun, it was like watching the glittery gold lure flicker in high definition on a wide-screen television. Then, from out of nowhere, the muskie suddenly appeared, opened her mouth and inhaled my bait. I waited a split-second, set the hook and watched as she twisted and rolled like a crocodile. Then my 120-pound-test fluorocarbon leader snapped cleanly at the crimp and she disappeared.

Have I ever mentioned how much I detest store-bought crimped leaders? Why? It’s impossible to know if they’ve been compressed properly without damaging the line. The best leaders are the ones you—or someone you trust—make with proper crimping tools. I have zero confidence in the ones that are mass produced. Ninety-nine times out of 100, they will perform perfectly, but then that one time they’ll bite you in the rear end. I knew that, but disregarded it and relearned the lesson the hard way. Worse still, I have never had a figure-eight tarpon knot fail me. So, tell me, why was I using a store-bought crimped leader? I’m not sure, but trust me, it won’t happen again.

That was certainly not the first time I lost a fish and learned a hard lesson. I recall one fish in particular back in my high school days when I accompanied a buddy and his family to fish Hay Bay, on Ontario’s Bay of Quinte. Every year, the local Kiwanis Club held a huge derby on the opening weekend of the walleye season, awarding a boat, motor and trailer to the angler with the biggest fish weighed in.

We started fishing at the stroke of midnight, and were still trolling at 4:30 the following afternoon. That’s when I hooked one of the biggest walleye I have ever seen, trolling a small, metal-lipped Cisco Kid crankbait. I fought the fish carefully for what seemed like an hour—although I’m sure it was only a few minutes—then pulled her up to the surface where we could get a better look. We thought it was a huge, gold-coloured carp, but then saw the splash of white on the lower lobe of her tail fin.

I tightened up the drag on my reel and quickly started skiing the struggling fish to the boat. Then my buddy leaned over the gunwale and stretched out the net as far as he could, and I dragged the enormous walleye over the rim. The instant she felt the cold metal touch her skin, however, the fish flipped backwards in a last act of desperation and I could only watch as my prize-winning walleye swam away. It was Saturday, May 2, 1964, the day I learned never to tighten the drag and pressure a pugnacious fish. As I said, you never forget the ones that get away—or the hard lessons they teach you in the process.