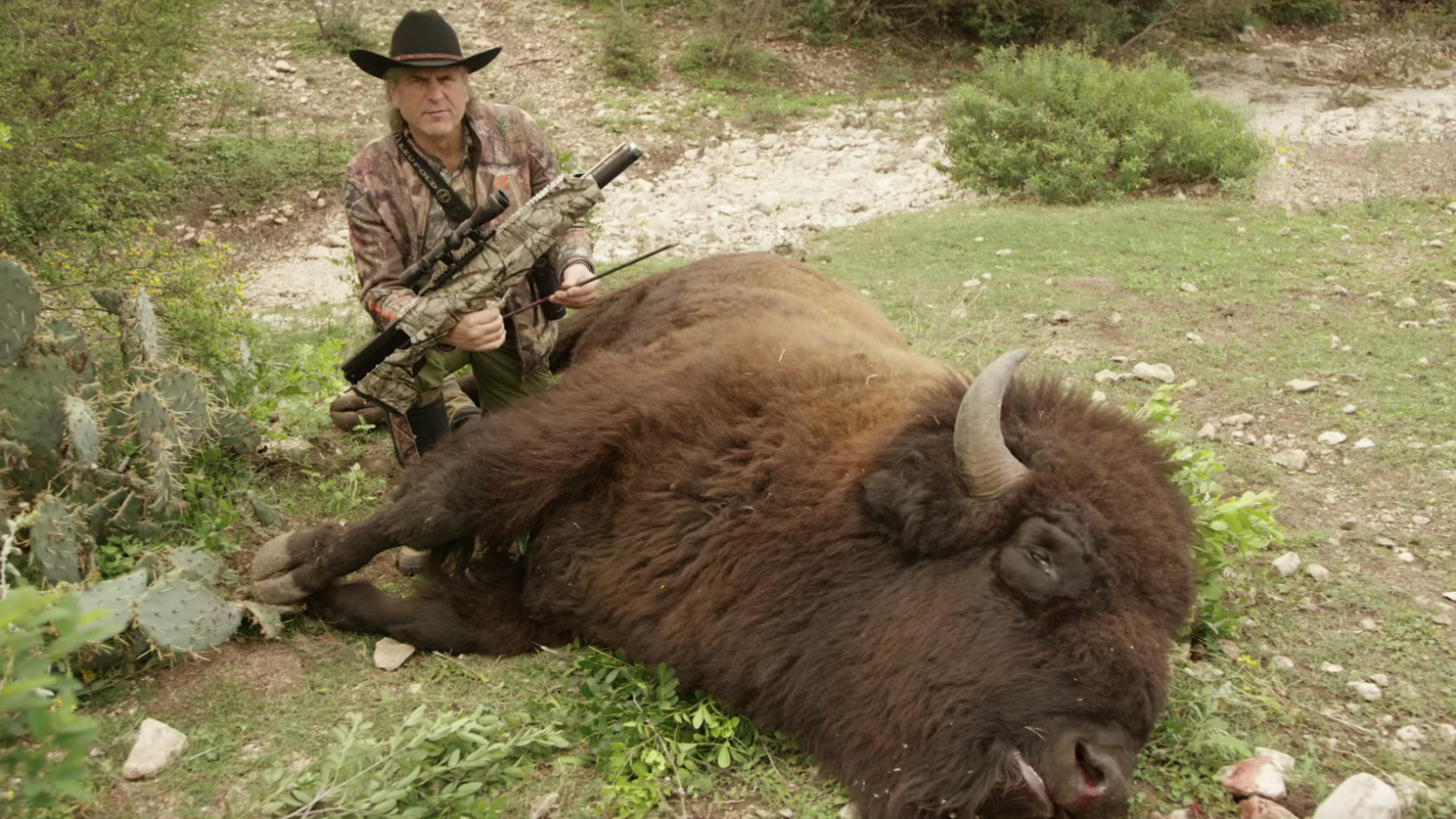 Why today’s airguns are finding favour with hunters

After Jim Shockey took down a bison with an airgun, hunters took note

This past January, a YouTube video featuring Canadian hunting celebrity Jim Shockey made the social media rounds. In it (below), Shockey successfully hunts a bison with Crosman’s new Pioneer Airbow, a gun powered by compressed air that propels an arrow at 450 fps. A hybrid air rifle/crossbow of sorts, it’s the latest offering in the ongoing renaissance for air-powered guns.

For many of us, our first introduction to firearms was an air rifle, usually a spring-powered BB gun. These are still popular and affordable, but the options today are considerably more diverse, more powerful—as evidenced by the Shockey video—and, in some cases, more expensive. The systems that drive modern airguns have evolved considerably, as well.

Dating back to the 17th century, spring-powered air rifles are still widely available. They derive their power, as the name suggests, from a piston driven by a compressed spring. The most common of these are cocked by breaking the barrel, an action that moves the piston backward and compresses a spring behind it. When the trigger is pulled, the piston moves forward again, pushing a column of air ahead of it and into the base of the pellet sitting in the breech. There are other cocking mechanisms available, but all basically operate on the same principle.

The benefit of spring-powered airguns is that they are reliable, generally inexpensive, easy to shoot and almost maintenance-free. You may have to eventually replace a spring, but that’s thousands of shots down the road.

When I was young, CO2 airguns were common, but they were generally owned by the rich kids. Back then, as with today, most were powered by disposable cartridges, although some are now filled from a bulk tank. Relatively affordable today, these are remarkably accurate little rifles.

The challenge with CO2-powered rifles is that the amount of air pressure changes with the lowering or raising of the ambient temperature. In fact, they’re not suitable as an outdoor rifle in the Canadian winter, as the gas has very low pressure at cold temperatures. Even during the summer, shooters need to confirm their point of impact when taking a gun from inside to the outdoors, and vice versa.

It’s pneumatic rifles, which use compressed air as a propellant, that have led the resurgence in airgun popularity of late, both for plinking as well as for small-game hunting. Pump pneumatics have been around a long time—as the name implies, they’re charged by pumping the forend to build pressure in an internal reservoir.

Pump guns at the lower end of the price spectrum require several strokes to charge between shots, making quick follow-ups difficult. Some do allow multiple shots from a single charge, but they suffer from a moving point of impact as the pressure is bled off. None of the multi-stroke rifles are known to be particularly accurate.

Alternatively, you can opt for a single-stroke rifle, though the trade-off is reduced power. They are, however, extremely accurate and are often found on high-end target guns, where their consistency and accuracy are revered.

These air rifles have the distinct advantage of allowing multiple shots in succession, often up to 25 or 30 before requiring a recharge. They also typically produce higher velocities than other air rifles, pushing pellets to as much as 1,200 fps, making them the choice for serious airgun hunters.

In the end, it’s the growing application for hunting that’s driven much of the evolution in airguns. When we were kids, our air rifles fired .177-calibre pellets; the increased energy and killing potential of the .22-calibre pellets in modern air rifles make them suitable for hunting small game. I don’t suspect many of us will ever hunt bison with an air-powered firearm, but the many options in today’s airguns have most certainly created new possibilities.

Be aware that airguns exceeding 500 fps are regulated under Canada’s firearms law, meaning a PAL is required to purchase and possess them. It also means you must also follow the regulations governing storage. If you’re buying a starter gun for a youngster, therefore, choose an air rifle with a velocity of less than 500 fps.