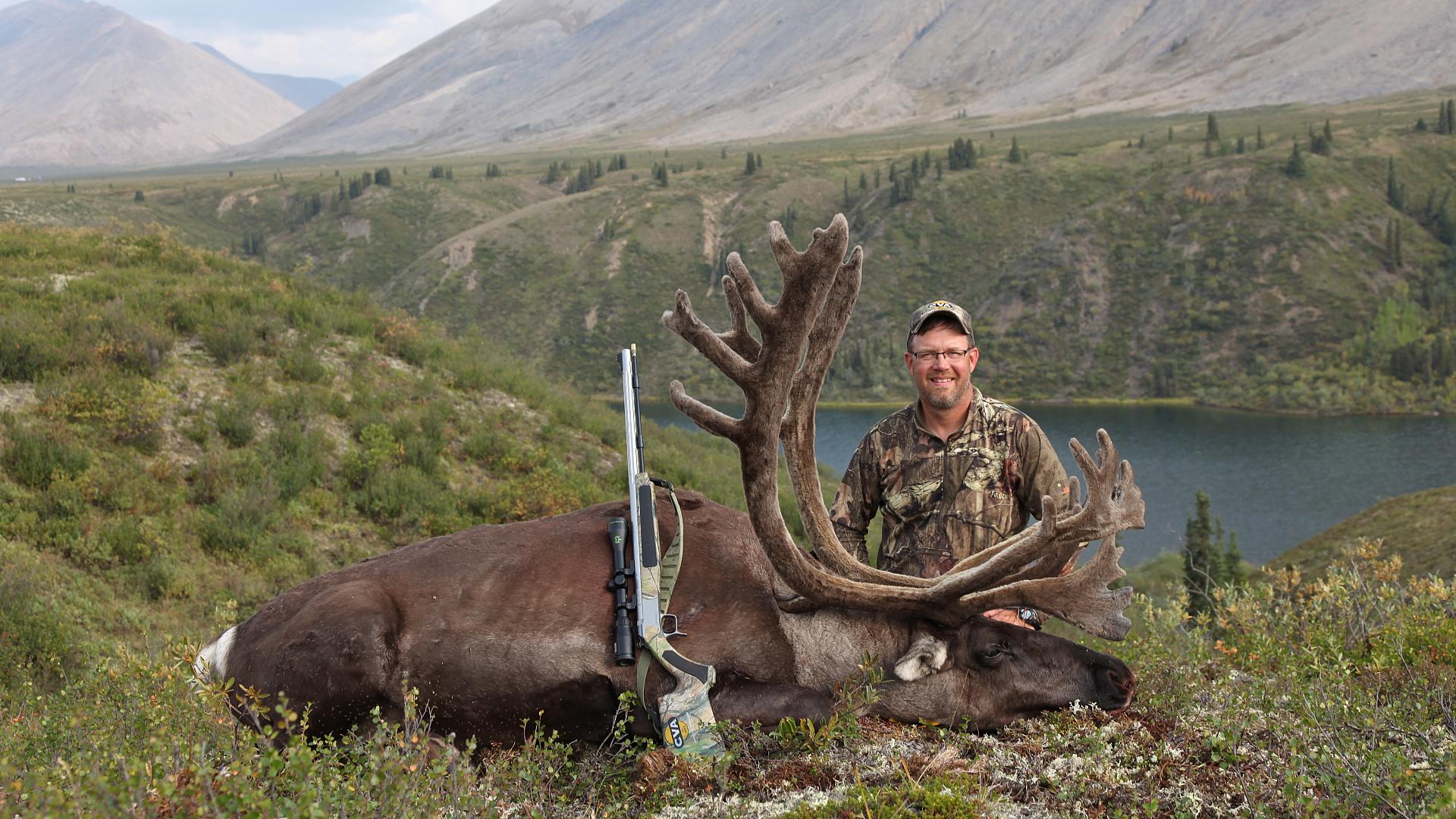 Experience the challenge of a high-country hunt on DIY budget

I shivered in the crisp morning air as we started up the mountain at daybreak. We had camped along a remote river the night before, giving us a full day to backpack into the rugged mountains of the Yukon’s Finlayson Range. The gruelling hike into the high country, with its steep grades and tangled brush, proved to be a challenge, and the shivers soon gave way to burning thighs.

When we finally broke out above the treeline hours later, we still had several kilometres to go before reaching our planned campsite in a protected pass. It was my first-ever mountain caribou hunt, and already it was turning out to be anything but a walk in the park. And without doubt it was every bit as challenging as pursuing sheep—but without the big price tag. It would also prove to be as rewarding.

As I’d found out, you can book a mountain caribou hunt for as little as three-quarters the cost a hunt for Dall’s or Stone’s sheep, and even cheaper if you go the do-it-yourself route (see “Up for adventure” below). And these trips take you into the same areas, and let you experience the same sights and sounds as a sheep hunter. Think of it as a poor man’s sheep hunt. In fact, you’ll probably even see sheep during your mountain adventure.

I knew this for certain the next day when I hiked past a small band of Stone’s sheep on my way to the ridge above our tents. And the view from the ridge was so spectacular, I immediately understood why mountain hunters feel such a longing to return to the high country.

Glassing the valley below and the rocky peaks around us (above), it didn’t take long to spy more sheep and even a massive old grizzly bear. The only thing missing was our quarry: caribou.

Finally, after three days of hiking, hiding from stormy weather and eating freeze-dried food, the caribou finally came to us. Shortly after hearing the sound of hooves clicking on the rocks above our tent, I found myself stretched out on the wet alpine grass and lichen, taking aim at a mature bull. I fired, and then the real work began.

Hauling an animal as big as a bull caribou anywhere is difficult, let alone off the top of a mountain. But the ache and fatigue of hiking up and down steep slopes while packing ridiculous loads of meat were soon forgotten amid the extraordinary sights, sounds and smells of the high country. And trust me: knowing you had the physical and mental resolve to hunt such remote and challenging terrain is a reward in itself.

Although mountain caribou are at home on the high peaks, they can also be found on valley floors, trotting along lakeshores or crossing rushing rivers. In short, not all caribou hunts have to be an Iron Man competition, and proper planning can reduce the amount of physical exertion required to be successful.

This is the approach I took for my second mountain caribou hunt. It was also in the Yukon, but this time my hunting partners and I chartered a floatplane to take us to a high-elevation lake. Beginning our hunt above the treeline greatly reduced the hiking time, and we visited places most hunters will never see.

We harvested three bulls on that trip, including one right on the lake, saving us a difficult descent to get it back to camp. However, the other two caribou were both spotted and harvested about an hour from our base. The backpack loads were extremely heavy, but at least we didn’t have to carry them as far as we had to on my first hunt in the Finlayson Range.

My most recent mountain caribou trip was in the N.W.T.’s Mackenzie Mountains. I was hunting with Stan Stevens of Mackenzie Mountain Outfitters, and although he specializes in Dall’s sheep hunts, his mountain caribou trips are second to none. His remote hunting area is tough to reach, requiring a flight to Norman Wells, then a helicopter or bush plane ride to base camp. The country is spectacular, and the view from the aircraft alone is almost worth the price of the adventure.

The plan was to hunt right from camp along a large valley between two mountain ranges, an area the guides referred to as the “Serengeti” because game continually funnel through the open expanse. We climbed an adjacent mountain so we could watch the valley and spot caribou when they were still several kilometres away. That way, if we spotted a big bull, we’d have enough time to get in front of it before it passed by—because caribou are always on the move, it’s impossible to catch up with one once it’s passed by.

In a test of patience, we looked at—and passed up—plenty of bulls over a number of days. But we knew it was much better to sit and let the caribou come to us than to hike steep mountains in search of the perfect bull. I’d learned this lesson on previous trips, opting this time to use good optics instead of muscle power.

There’s no mistaking a big caribou when you finally see one. So, when a set of large antlers finally appeared on a ridge several kilometres down the lake, we quickly set up the spotting scope for a better look.

The long beams, double shovels and curving bez screamed trophy bull, leaving us with no time to waste. We raced down the mountain, jumped in a boat and headed across the lake to get in front of the incoming bull.

At the far shore, we climbed a steep embankment rising 300 metres above the lake, thinking we had plenty of time to get ahead of the caribou and look him over before setting up for a shot. We were almost sorely mistaken—as we crested the embankment, the bull was already 70 yards past us.

I had opted to hunt with my .50-calibre muzzleloader, so I only had one chance. Thankfully, the bull stopped and looked back when he heard us moving through the brush, presenting a broadside shot. As the dense cloud of grey smoke cleared from in front of my gun, the beast fell to the ground.

In the end, the bull’s massive antlers placed it among the top three trophies in the Longhunter Society’s Big Game Record Book. More importantly, however, it left me with great memories of an extraordinary place. Mountains may be tough to climb, but they’re even harder to stay out of once you’ve experienced their magic. And mountain caribou provide the perfect excuse for a return visit. Without breaking the bank.

Intrigued about the possibilities of hitting the high-country for giant mountain caribou? Let this primer get you started on your way.

A variety of woodland caribou, mountain caribou are found only in B.C., the Yukon and the N.W.T. During summer, they stay high in the mountains to avoid biting insects—it’s not unusual to find the sharing ridges with sheep, or at even high elevations. As fall approaches, however, caribou will herd up and move into lower valleys for the October rut. The largest-bodied of all caribou species, mountain caribou can weigh as much as 600 pounds. They’re chocolate-brown in colour, with a lighter throat mane that turns almost white in the late season. In proportion to their large bodies, mountain caribou also grow the heaviest antlers of all caribou.

Hunting seasons vary, with many beginning as early as August 1. Late summer and early fall are ideal times to backpack hunt or use float planes to get into remote mountain lakes. Bull antlers will be in velvet until early September, so plan accordingly depending on whether you want hard or velvet trophies. Bulls are considered inedible during the mating season and for that reason, the season often closes in many jurisdictions.

Any mountain hunt is challenging, but hiking and staying focused are more mental than physical. I’ve been in camp with hunters in their late seventies who harvested game from the mountaintops. That said, it will certainly help to do some cardio workouts and strength training. Running, using a stair stepper and doing lunges are easy ways to get your legs and lungs in mountain shape. After that, it’s just a matter of telling yourself you know you can do it.

Through special guiding licences, there are opportunities for Canadian residents to hunt with friends or family in both B.C. and the Yukon. This allows hunters with a lot of ambition—but not a lot of cash—to participate in a mountain caribou hunt on a do-it-yourself budget. If a friend or family member can host you, you can make such a hunt a reality. Contact:

If you prefer to head for the hills with trained professionals, there are numerous outfitters and guides at your service in B.C., the Yukon and the N.W.T. Contact: