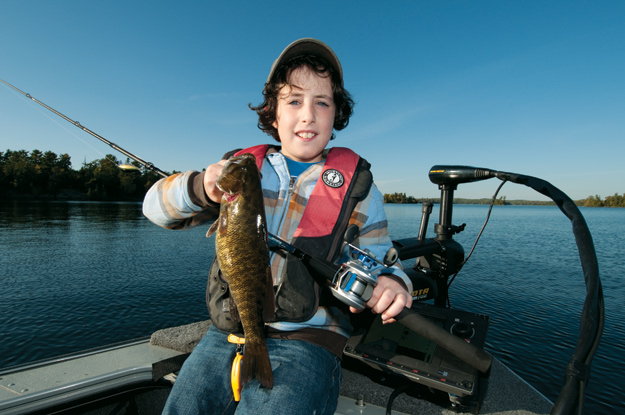 Why you should keep fishing with mono

With braids, geL-SPUNS and fluorocarbons hogging the fishing line limelight these days, you’d think there’s no longer any use for monofilament. Well, don’t you believe it—there are still situations when it’s best to spool that good old nylon string onto your reels.

A case in point: Three years ago during a fishing tournament, with less than 30 minutes remaining, I hooked the biggest smallmouth bass I’ve ever seen. My partner and I had been tied with another team for first place, and this fish would have sealed the win for us.

To make a long and painful story short, I led the fish to the side of the boat, where we could clearly see it was barely hooked by the skin of its lip on just one tine of the back treble. As I brought the bruiser to the net, it flared, snagged a weed stalk and pulled free. The fact I was using non-stretch braided line cost us $12,000 for the win and another grand for big-bass honours.

Had I been using monofilament, however, the line would have stretched when the fish first hit, providing a split second of extra time for the bass to get a firmer bite on the lure. I now throw all my open-water topwater lures—with the exception of frogs—on floating monofilament, which also makes for a better presentation.

Of course, there are other reasons when you sometimes want your line to float. I was reminded of this during a recent chat with Bassmaster Elite Series pro Kelly Jordon, who had just competed against some of the best bass anglers on the planet to win a major tournament in Texas. I asked him to name the most important factor that contributed to the $100,000 victory.

“Spooling my reel with monofilament line,” he replied, without missing a beat. “I was throwing a weightless Senko-style stickbait, just like every pro around me, but I was catching fish and they weren’t getting a bite.”

The reason? His competitors were all using sinking fluorocarbon line to speed up the fall of their lures, while Jordon was using floating monofilament. “The mono slowed down the fall of my stickbait,” he said, “and that’s what the bass wanted.”

So yes, there are times when you want your line to float, just as there are occasions when you want it to stretch—and that’s when monofilament is your best choice. There are also situations when mono inexplicably gets the job done better than the alternatives.

That’s been the experience lately for Lake Michigan charter captain Tim Dawidiuk, who is legendary for his amazing catches. Targeting salmon and trout, he trolls his signature series Howie Fly behind flashers and dodgers attached to a braided or wire main line. That’s a fairly standard set-up, but here’s the secret to his success: he splices a 30-foot length of monofilament between the main line and the attractor.

“I can’t explain it,” says Dawidiuk, shrugging his shoulders. “Maybe it’s a harmonic thing. All I know is that when you splice in a long length of 17- to 25-pound-test monofilament line ahead of your attractor, you’ll catch more fish.”

What I find especially intriguing about Dawidiuk’s “harmonics” observation is that I’ve witnessed the same thing when trolling for muskies. I’ll consistently catch more, and often bigger, fish on my rods spooled with monofilament line than those loaded with braid. It’s a fishing riddle I’ve yet to fully solve, but at least it gives me one more reason to not give up on tried-and-true monofilament.