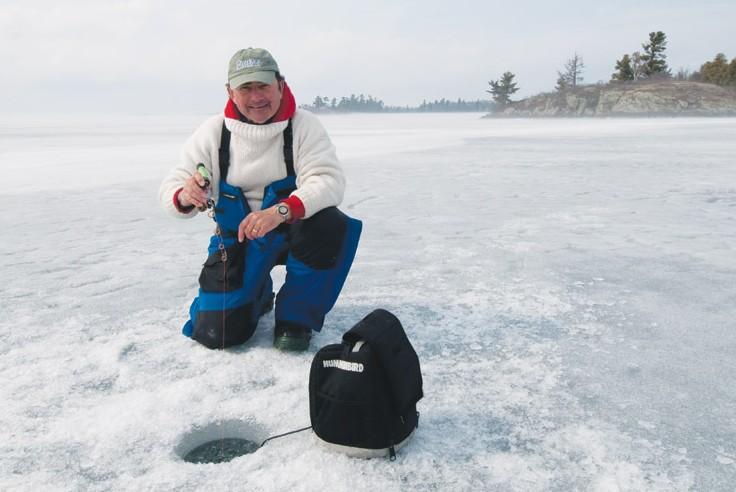 Why you should stay off the bottom when ice fishing

Most anglers think fish are at the bottom. Learn where your lure should really be

What are the two most common—and related—mistakes ice anglers make when fishing for black crappie, lake trout, northern pike, sauger, walleye or yellow perch? They generally fish too close to the bottom—well below the fish—and that when they spot a stalker on their sonar screens, they try to make it easy for the fish to hit their bait. In other words, they drop the bait on its nose.

For some strange reason, there’s a near cult-like belief among walleye anglers that their quarry is always lying with its belly touching the bottom. But nothing could be further from the truth.

Lake trout anglers, too, are almost universally guided by the mistaken notion their quarry lives in the deepest recesses of the lake. Lake trout may be forced by water temperatures to behave this way in the summer, but it’s far from the case during the winter.

Instead, you need to get your lure at least 18 inches up off the bottom where the crappies, perch, pike, walleye and sauger can see it. If you’re fishing for lake trout, on the other hand, you rarely need to lower your lure more than 40 feet below the ice, even when you’re fishing over water twice that deep. Also with trout, concentrate most of your time fishing structure—points, bars, humps, reefs, rock piles and the like—that top out in 20 to 30 feet of water.

As for the second mistake of placing a lure right on the fish’s nostrils, never ever make it easy for a fish to grab your bait. Instead, tease it up to your lure to bite. I can’t tell you how many times I’ve watched walleye anglers attract fish onto their screens by jigging a lure, only to spoil it by dropping the bait down to the fish as though the secret to triggering them to bite is somehow making it as easy as possible (it’s even worse watching lake trout and whitefish anglers). Invariably, the walleye will slam on the brakes and slink away.

Think about it. When a baitfish is struggling in the water column and a big toothy predator approaches, the last thing the baitfish does is flutter down in front of the predator’s face so it can be eaten. So, when you spot a crappie, perch, pike, sauger or walleye sliding up to your lure, ever so gently pull it away so it mimics a struggling minnow trying to escape.
To entice a lake trout or whitefish to bite, meanwhile, I’ll often reel up my lure so quickly you’d think I didn’t want to catch it. Instead of losing interest, however, the fish will turn on the afterburners, rocket up after the desperately fleeing dinner and crush it.

So, repeat after me: I will not fish on the bottom this winter. And every time I attract a fish and see it on the sonar screen coming for my lure, I will not make it easy for it to eat my bait. Do these two simple things and you will double your catch.