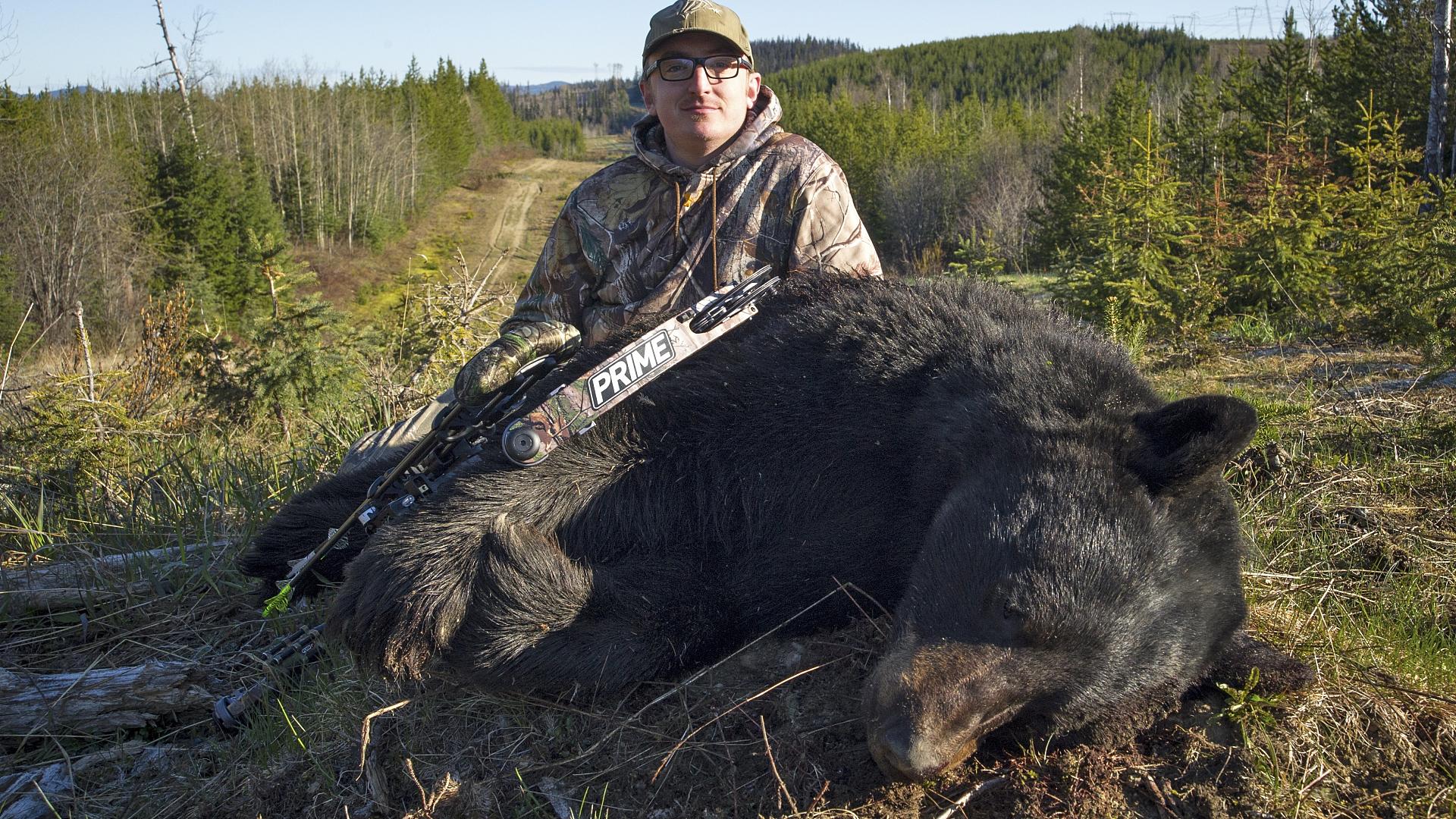 Cruisin’ for a bruin

Forget bait. For pursuing black bears, nothing beats the excitement of spot-and-stalk hunting

As I came over the knoll and saw the black, furry back of a trophy bruin feeding 50 yards away, the adrenalin set in. With the bear completely unaware of my presence, there was no point in standing up and taking a long shot—I had more than enough time left in the day to see where it was heading and wait for a better opportunity.

I patiently held my ground, watching the bear’s every move, and sure enough, it decided to leave the grassy clearing and head toward the timber. Oh, did I mention I happened to be right between the bear and the patch of brush he was heading towards? Hastily, I clipped the arrow release onto my D-loop, as I knew the bear was coming quickly and it would only be a matter of seconds before he was on my lap.

While making his way in my direction, the big boar made good use of the last few yards by eating the fresh spring grass, which, thankfully, gave me time to draw back my bow undetected. Time seemed to stand still as he closed about half the distance. I anchored the pin on his vitals, slowly squeezed the trigger and watched as my bright white fletches disappeared into the black fur.

After a quick follow-up shot, I had a Pope and Young class bruin on the ground and a notched tag for my second spring spot-and-stalk black bear. When sharing a photo of the animal with my hunting buddies across North America, the first question that always came up was, “Were you hunting over bait?” I wasn’t, of course, but I have no problem with using bait—I’ve taken many bears that way in the past. But for me, spot-and-stalk adds an extra level of excitement to bear hunting. Here’s what you need to know to get in on the action, too.

If you’re willing to do all the work of running baits or pay to go on an outfitted hunt, you’ll likely have better odds of shooting a spring bear. That’s because you’ll be hunting bears that think with just one thing after coming out of hibernation—their stomachs. But spot-and-stalk hunting can also take advantage of that weakness. Over the years, I’ve managed to locate several areas that are the first to green up in the spring, and ultimately serve in the same manner as bait sites by luring in hungry bruins.

Indeed, timing is the biggest factor when planning a spot-and-stalk bear hunt. Along with finding the first areas to green up after the snow melts, you can also spot big bruins cruising the countryside looking for a sow in heat once the spring rut kicks in.

As for fall, time your hunt for when the berries are in their prime, especially in the West. While glassing mountain hillsides, it’s not uncommon to spot several bears in a single day, feasting on this essential part of their fall diet.

Whether you’re heading out in the spring or fall, keep in mind that the timing will be slightly different from area to area. So, if you’re not hunting with an outfitter who already knows which dates are ideal, do some research on your own—pick up the phone or jump on the Internet and reach out to those in the know. Online hunting forums, conservation officers and even the local hunting store are good bets for gathering intel. It will be well worth the extra effort.

Once you’ve determined the best time to head afield in a particular area, the next step is to actually locate the bears, and that means putting some kilometres on your boots. Sure, quickly coming across a bear during this process can be a bonus and a quick way to end your hunt, but if you’re not seeing bears, on the other hand, don’t assume you’re in a poor location.

I harvested my first Boone and Crockett bear by simply hiking until I found enough sign of a mature animal—tracks, scat and hair—that I knew it would be worth my effort to not give up on the area. Sure enough, I eventually spotted the bear breaking out of the timber, and was I able to sneak in 100 yards closer for a quick rifle kill.

Pinpointing an area with concentred sign is definitely key to a successful spot-and-stalk bear hunt, whether it’s in the spring or fall. Black bears have relatively small stomachs, requiring them to eat continuously throughout the day. If they find a good food source, they’ll usually return to the same area several times throughout the day—and leave behind plenty of sign.

On the flipside, if you come across an area that has just one good set of tracks passing through it (above), don’t spend too much time looking. The tracks were likely left behind by a bear on the move, not a return resident feeder.

Field judging bears is the same whether you’re hunting over bait or spotting and stalking, right? Wrong. When you’re hunting with bait from a stand, there are typically certain points of reference that can help you determine the size of the bear. You can compare the bear to the bait barrel, for example, or judge its height based on whether it’s tall enough to reach the beaver carcass dangling by a rope overhead.

When you’re spot-and-stalk hunting on the ground with no predetermined reference points, however, bears can be quite difficult to judge. That said, there are several telltale signs of a big bear that can’t be missed. When I’m field judging, for example, I try to focus purely on the head.

In particular, the number one thing I look for is a crease in the bear’s forehead, caused by the muscle on the skull building up over the years. If the crease runs from the eyes back to between the ears, I know I’m looking at a trophy animal. To date, this method has never led me astray.

It’s not enough to rely on just one physical feature, though, so I also look at the bear’s ears. If it’s a truly big bruin, the ears should appear small, protruding from the side of the head, rather than on top.

So, you’ve finally spotted a trophy animal—now what? Do you quickly sneak up and shoot it? This might work once in a while, but it’s far better to first take a few precautions to ensure you successfully harvest the bear.

Unlike deer, the bear’s weakness is its eyesight. This allows you to get away with small amounts of movement, but precisely because of the poor eyesight, it seems the bear’s other senses are heightened—if your quarry smells or hears you, there’s a good chance you’re going home empty-handed. (This doesn’t seem to be the case when hunting over bait, however. Just about every time I’ve had a bear come in, it looked at me and smelled my scent, but didn’t flee. Some even tried to climb up the tree to check me out, up close and personal.)

As with spotting and stalking any game animal, playing the wind and staying downwind is therefore essential. As for striving to remain silent, wool socks can be your best friend when closing the final distance, especially while bowhunting in tight quarters. Simply lose your boots and throw on the socks at the start of the stalk, and you’ll immensely reduce the sound of your footsteps. Another good option is a pair of sound-dampening Sneek-EZ boot covers.

Moving only when the bear is occupied is also integral to a successful spot-and-stalk hunt. Whether the bruin is feeding, distracted by something or walking in any direction other than toward you, that’s the time for you to move in. And as soon as the bear stops, you must stop, too.

If you’re planning to head out for black bears this spring or fall, and you’ve always hunted over bait, consider getting on the ground and harvesting a bruin at eye level instead. Not only will you get more exercise if you spot-and-stalk your quarry, if you’re like me, you’ll also enjoy a much more rewarding—and intimate—hunt.