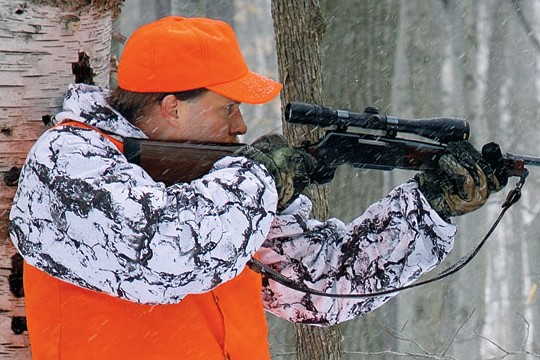 Perhaps the single most noticeable change in firearms over the last 10 to 15 years has been the proliferation of synthetic stocks. Whether we’re talking rifles, shotguns or muzzleloaders, synthetic stocks are all the rage and, while I don’t have the hard data to support my claim, I would suggest synthetics are now far outdistancing wood-stocked firearms in new gun sales. But are they a superior product? The answer is yes-and no.

Synthetics first hit the market some 30 years ago when Chet Brown of Brown Precision fame introduced a fibreglass stock to the sporting fraternity, having first won over the very particular bench-rest crowd. Bench shooters appreciated the consistency the glass stock afforded, since it never swells or shrinks as wood does, which can put pressure on the action or barrel and ultimately affect the rifle’s accuracy.

What started as a fad became a movement by the early 1980s, when Weatherby introduced the Fibermark, the first synthetic-stocked factory rifle. Since then, all the major manufacturers have jumped on board, and synthetics have evolved from pure, hand-laid fibreglass to today’s mixtures of Kevlar, graphite, boron, fibreglass, urethane and plastics, some still hand-laid, others injection-moulded.

There’s simply no denying that synthetics are considerably more moisture-resistant than traditional wood stocks. They’re physically incapable of absorbing water, making them impervious to the swelling and shrinking that even the finest wood stock will suffer if subjected long enough to moisture.

Synthetic stocks are also inherently stronger. I’ve fallen more than a few times while carrying synthetic-stocked rifles, and other than some chips and scrapes, the stocks have all come through unscathed. The same can’t always be said for wood stocks, which are far more prone to cracking or breaking.

There’s a common notion that synthetic stocks are lighter than wood, but this isn’t necessarily true. Depending on whether they’re solid or hollow and how they’re designed, synthetics can weigh as much or more than some wooden stocks. While most of today’s ultralight rifles are synthetic-stocked, it’s the reduction in metal that contributes most to the lighter weight.

Are synthetic-stocked rifles inherently more accurate than those stocked in wood? Absolutely not. The stock material has no bearing at all on whether a rifle shoots well-raw accuracy depends on barrel quality, bedding quality and a host of other variables. It’s true, however, that a synthetic-stocked rifle is less likely to change its point of impact in extreme weather.

It’s also probably fair to say that, on average, synthetics cost less than wooden-stocked rifles, and this price gap is likely to widen as technology improves and good walnut becomes scarcer. But, the comparisons shouldn’t end there.

My two primary deer rifles are synthetic-stocked: the 7mm Rem. Mag. features a McMillan stock, while my .25-06 has a Brown Precision one. Both rifles are reliable and shoot consistently well when I hold up my end of the bargain. Last year, though, I got the itch for another gun, a semi-custom rig that would be my dream rifle. When it came time to decide on the stock, I didn’t think twice before selecting a beautiful piece of walnut.

There’s something about the warmth, feel and look of a wooden stock that synthetics will never be able to replicate, and if this were to be my only rifle of truly hand-me-down quality, there would be no question it would have to feature wood. And by the way, it shoots as good as it looks.

For many, rifles are more than mere tools — they’re a meaningful, if difficult to articulate, link between the hunter and the hunt that goes well beyond the mechanics of shooting. For them, wood will always be the choice when practicality allows. But for others, rifles are there to do a job, period, and I suspect those hunters will increasingly select synthetics.

As for me, when hunting in extreme weather or extreme places, I’ll select a rifle that sports a synthetic stock. But when conditions allow, and they generally do, most often I’ll reach for a rifle dressed in walnut.

Much like rifles, shotguns also offer the shooter plenty of choice between synthetic and wooden stocks. I only shoot wooden-stocked guns when hunting the uplands or gunning for waterfowl in the fields. But when I head out on the big water after diving ducks — where everything invariably gets soaking wet and banged around — I pull my synthetic-stocked Winchester SX2 off the rack.