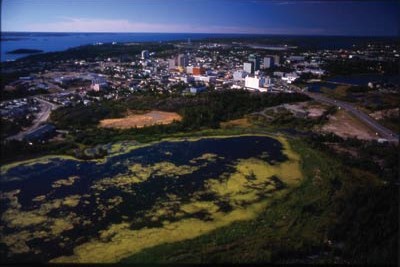 Originally a 1930s gold rush town on the shores of Great Slave Lake, Yellowknife sprawls across the amorphous bedrock of the Canadian Shield, confident in its contemporary importance as Canada’s diamond-mining centre. International giants such as De Beers, BHP Billiton and Rio Tinto now have offices here, servicing mines on the frozen barrens. Yet despite the territorial capital’s prosperity, you can still head out after work and be hunting within 15 minutes. What would you bag that close to town? Spruce grouse during the fall and ptarmigan in the winter, for starters. There’s also good duck hunting over decoys in the shallow bays until freeze-up. As for moose, your best bet is to float one of the area’s many rivers for a day or two. For huge Alaskan moose, head over to the southwest corner of the territory. While concerns exist over woodland and barren-ground caribou herd sizes, hunts are still permitted. Check with local game managers for details. Then there are Dall’s sheep, mountain goats and grizzly bears roaming the high country of the Mackenzie Mountains near the Yukon border, while ruffed and sharp-tailed grouse stick to the southern Mackenzie River country. And the boreal parkland west of Great Slave Lake is home to a sizeable herd of 2,000 wood bison—of the 15 bull tags issued each year, there’s a 90 per cent success rate. Hungry for a real adventure? Muskox hunting involves a long haul by snowmobile to the Thelon River in eastern N.W.T., packing supplies and equipment across the frozen barrens. Basic hunting gear is available at Yellowknife’s two big-box stores, while specialized items can be mail-ordered from outlets in Winnipeg.