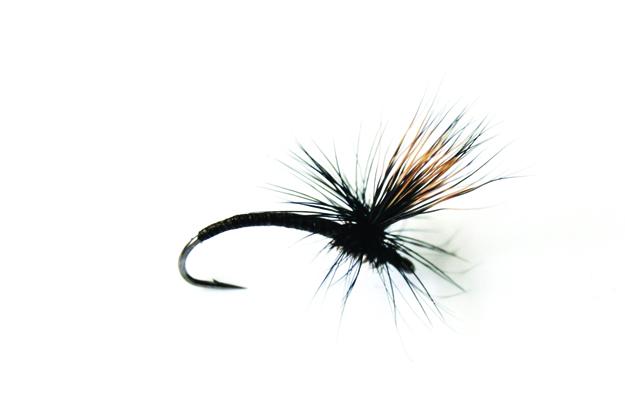 To consistently catch trout on dry flies, you need to be ready to imitate practically everything they eat off the surface: caddisflies, stoneflies, chironomids, the most common terrestrials and the mayfly’s emerger, dun and spinner stages. You also need to consider the water itself. A fly that floats well in rapids or pocket water, for example, might prove overdressed for a spring creek. This may sound as if you need to carry a lot of flies, but you can keep it simple by narrowing down your choices to the following 10 patterns, each designed to fill a role in your dry-fly arsenal. Some are specialists, while others have many uses, but they all share one key feature: adaptability. By following the basic designs of these flies, and tweaking the sizes and colours to match local insects, you can raise brookies, browns, ’bows and more from Newfoundland to B.C. to Nunavut.

The following fly recipes include typical fly-tying materials, but not necessarily those appearing in the accompanying photos of completed flies (tied by Tim Hiltz and Paul Marriner). When tying these flies, only use dry-fly-quality cock hackle, except where noted.

Created by Dutch angler Hans van Klinken, this is the world’s leading dry fly for trout, in my opinion. Fundamentally, the Klinkhamer Special represents a mayfly emerger, the stage where the swimming nymph reaches the surface and begins to transform into a dun. However, it’s also a fine stand-in for other aquatic species. The Klinkhamer’s key element is the way part of the body hangs below the surface. Originally, van Klinken bent traditional hooks to get this shape, but for more than a decade, Partridge has offered specialty Klinkhamer hooks. Recently, Daiichi introduced the 1160 model, also designed by van Klinken. The fact that two different hook companies offer a model for a single fly design speaks volumes about its popularity. One of my favourite Klinkhamer patterns features a white wing, black body and grizzly hackle. In a size 18, it has seduced numerous rainbows feeding on midges.

Hans Weilenmann, also from the Netherlands, came up with this design. The name recognizes its forebear—the Elk Hair Caddis— though deer hair, not elk, is generally used for the wing. The body and thorax is a CDC (cul de canard) feather tied in by its tip at the rear of the shank, and then wrapped forward. Applied this way, the body resembles sparse dubbing, with a bulkier thorax and filmy projections due to escaped barbules. This simulates both an emerger leaving a filmy shuck, and a stillborn or crippled insect, all of which are attractive trout targets. For me, when a Klinkhamer fails to interest a riser, a CDC & Elk frequently seals the deal. To get the desired effect, it’s best to select a Type 1 CDC feather, although this somewhat restricts the design’s usefulness, since Type 1 CDCs usually come in a limited range of sizes.

Essentially an emerger imitation, this one-material fly is a serendipitous creation of the late Francis Betters, long-time owner of the Adirondack Sport Shop in Wilmington, N.Y. One day, Betters used a snowshoe hare’s foot to tie a few flies in his trademark Haystack/Comparadun style. He gave the creations to a friend, who had considerable success with them. When asked what he was using, the angler cagily replied, “Oh, just the usual.” The name stuck. Because Betters’ friend lived in Toronto for a time, the Usual became well known in southern Ontario before its fame spread farther afield. Using hare’s foot offers several advantages: the translucent guard hairs resemble a shuck, and the underfur is naturally water repellent. The Usual should be fished without flotant, because even when slimed, it dries quickly with just a few false casts.

As I stood in a cold penetrating drizzle, Alberta’s North Ram River, with its beach-rock bottom seemingly devoid of life, was doing me no favours. After several hours of fruitlessly alternating upstream nymphs with downstream bucktails, brown drake mayflies started floating past me and several of the biggest cutthroat I’d ever seen materialized from among the rocks. A frantic search of my boxes unearthed a big, dark Comparadun and success was quickly mine. Closely related to the Haystack, this design originated with Al Caucci and was introduced in his seminal book Hatches (co-written with Bob Nastasi). In my dry-fly arsenal, the Comparadun fills the “large mayfly dun” slot, but many expert anglers consider it essential in every size. It may appear sparse, but tied full with a heavier tail, the Comparadun copes well with heavy water.

With the Comparadun to handle any oversized mayflies, I fill the itsy-bitsy slot with this simple fly that imitates both tricos and adult midges. The Gnat was designed for fishing Michigan’s Au Sable River by George Griffith, who holds an additional place in fly-fishing lore: he hosted the first-ever meeting of Trout Unlimited at his home in 1959. Today, both the fly and the conservation group he co-founded have gone on to trans-Atlantic fame. For times when the original is refused, my boxes include a few variations sporting body materials with some flash. The key to successfully fishing these small patterns is a leader fine enough to prevent drag, and remembering to protect it by striking gently. My hand can be a bit heavy, so I sometimes use an elastic tippet material, such as Shock Gum, between my line and leader.

Spinners are the final adult stage of mayflies, which become trout food when they die and fall to the surface after mating and laying their eggs. Spent spinners, as they’re known, have clear wings and two extra-long tails. Floating on the surface, they resemble a gymnast performing the iron cross on the rings, only on his back. Since their bodies are typically a rust-brown shade, a single pattern in a range of sizes will usually do. As the name suggests, my Foam Post Emerger was originally intended as an emerger pattern, and it’s still a good option in hatch situations. However, I expanded its usefulness by modifying the tail to imitate a spent spinner. Most fly anglers will encounter only a few spinner falls each season, so this single design in a range of sizes should suffice.

Nova Scotian Dan MacIntosh first popularized this design for Atlantic salmon nearly seven decades ago. While the exact origins of the MacIntosh are unknown, some evidence suggests its antecedent was a downwing stonefly imitation from the western U.S. Most stoneflies spend little, if any, time on the surface while hatching, but they can all end up there while laying eggs. In trout sizes, the MacIntosh is quite popular in Eastern Canada and I use it for both stoneflies and larger midges. For some additional history and lore about the MacIntosh, visit the St. Mary’s River Association website.

A ready-for-anything fly box needs a substantial searching pattern to represent larger stoneflies, grasshoppers and such infrequent visitors as adult damselflies and dragonflies. Created on the U.S. West Coast by angler and author Randall Kaufmann, the Stimulator was originally intended to imitate the Golden Stone, but numerous variations have appeared since its introduction. The most complicated fly to tie among the 10 patterns shown here, the Stimulator will suffice in areas with limited hopper activity. Where naturals are abundant, however, I strongly suggest a box with several designs. I’ve cycled through as many as four before a feeding brown cooperated. In fact, writing this article reminded me that I needed to replenish my supply—a sure sign it’s one of my favourites.

Forty-five years ago, I was fishing the Rose Motel section of New York’s famous Beaverkill River, where trout were rising near the far bank. I tried at least a half-dozen patterns before finding success with a size 20 Black Foam Beetle. Ants and beetles aren’t everyday trout chow, but you’d better have something for those times when flying ant falls bring every trout within range to the table. Because these are all essentially bits of black, closed-cell foam lashed to a hook, I consider them a single design. For a beetle, tie the foam at the one-third point behind the eye; for an ant, tie it midway back. After nearly 50 years fly fishing for trout, I’ve never had red ants fall on my cap. Still, I keep a few red ants in my box. Just in case.

Adult caddisflies are rarely found on the surface during the day, so what makes the Elk Hair Caddis a renowned searching pattern? My guess is it’s because of the fly’s general resemblance to an array of terrestrial insects that occasionally end up in trout streams. Of course, when caddis adults do find their way back to the surface film while laying eggs or once they’re spent—typically in the evening or just after dark—the Elk Hair Caddis rarely fails. The fly’s creator, Al Troth, originally offered his design in just three body colours: gold, black and green. I have an entire box dedicated to this fly, including some with a major modification for flat water: no hackle. Troth preferred to wrap the hackle from front to back and use a fine gold wire rib to secure it, but many tiers now palmer the hackle from the rear and omit the wire.