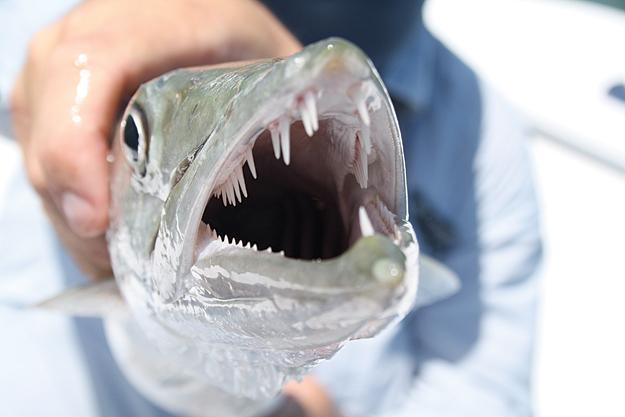 When a tropical town known for beaches, artists, throngs of tourists and a raucous nightlife also claims to have world-class fishing, you’re right to be dubious. But according to the International Game Fish Association, Key West is home to more angling records than any other destination in the world. And those aren’t musty old catches—in recent years, the Florida town has accounted for nearly 15 per cent of IGFA saltwater records.

A community of 25,000 crammed into just 20 square kilometres, Key West is perched on the end of the Florida Keys, an arc of islands extending several hundred kilometres southwest from the mainland, with the Atlantic on one side and the Gulf of Mexico on the other. Here, anglers can target sharks, barracuda, tarpon, permit and bonefish on huge shallow flats. And just off shore, 600-foot depths hold billfish, mahi-mahi, snappers and grouper.

The Conch Republic also has a long and well-deserved reputation as a haven for the eccentric, burned-out or iconoclastic. Today, however, it’s more of a booze-soaked, anything-goes tourist town, where spring-breakers and millionaires rub sunburned shoulders at the margarita cart. Yet its most famous resident, legendary angler and writer Ernest Hemingway, still looms large. In the 1930s and ’40s, when not downing mojitos or pounding at his typewriter, Papa shattered virtually every big-game fishing record in the books. Then, three decades later, a band of chemically altered writer-anglers such as Richard Brautigan, Philip Caputo, Jim Harrison and Thomas McGuane popularized light-tackle fishing on the flats, now high on the bucket list for many fishermen—including me until I finally visited Key West last June.

But here’s what they don’t tell you: flats fishing is tough. Sure, it’s sort of implied if you read the many stories of anglers driven mad by the tropical heat and temperamental fish, but no one comes right out and says it. Well, now’s the time to set the record straight. In more or less chronological order, here are 16 things I learned the hard way about fishing the saltwater flats off Key West. 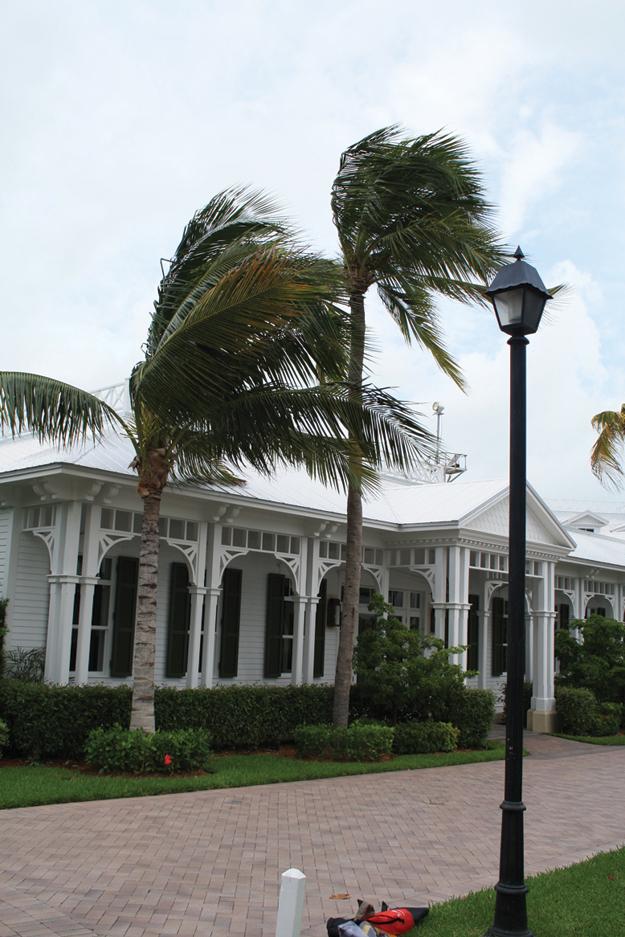 1. Don’t visit during a tropical storm: If fishing a cold front is tough, imagine what it’s like after eight hours of torrential rain, 75 kilometre an hour winds and a storm surge. I arrived about two hours before Tropical Storm Debby, and though she hit land more than 500 kilometres away in Florida’s Big Bend area, her swirling edges still churned the shallow, usually crystal-clear water of the Lower Keys into an unfishable murk. The locals said it would put the fish off for three or four days, which was, of course, the length of my trip.

2. Sharks are not a top-tier trophy: After the storm, the guides broke the news: because of the wind, chop and muddy water, we’d have to settle for the lowest-tier fishing experience in the Keys. And that was? Hunkering behind mangrove islands and catching half-pound snappers and hammer-handle barracuda—to use as bait for shark fishing. Yep, the bottom-of-the-barrel Keys fish aren’t suckers or rock bass. They’re sharks.

3. Some sharks are better than others: The bottom-feeder of the Florida shark world is the nurse shark, which snuffles along hoovering up small prey such as rays, shrimp and, in our case, sandwich-sized chunks of barracuda. However, what they lack in acrobatic ability they make up for in raw strength. The one I caught, a four-footer, bulldogged for about 20 minutes before we got it in. But it was nothing like the shark that boatmate Woody Blackford, vice-president of innovation with Columbia Sportswear, hooked minutes later. Possibly a black tip, lemon or even a bull shark, it spooled off 200 yards of 40-pound braid and broke off in less than a minute.

4. Cotton is for tourists: Wear the right clothes. It’s not a fashion thing—you will get soaked from spray or hopping in the water to stalk or land fish, and wet cotton is heavy and dries slowly. Plus, it chafes. My visit was courtesy of Columbia Sportswear, so I was decked out in its Performance Fishing Gear apparel, but any lightweight, quick-dry synthetic pants and tops should do. And unless you’re the type to, ahem, go commando, that includes your underwear (see reference to chafing, above).

5. The flats are aptly named: Once the conditions allowed us on the flats, the water was exactly as I had imagined, but more so. Picture an area of ocean the size of one to 10 football fields never more than three feet deep, with well-defined edges dropping off into much deeper water, and often bordered by reefs or mangrove islands. Under the blazing sun, you can see every detail of the bottom—sand, pebbles, shells. And there is no cover, almost no structure and, it would seem, no fish.

6. There are fish somewhere: Flats fish are almost impossible to spot, at least at first. Like the desert, the flats appear barren, but they’re actually a rich ecosystem full of well-camouflaged critters. The crabs, shrimp and baitfish are hiding from the bonefish, permit, rays and other medium-sized fish, which in turn are hiding from the ’cudas and sharks, which, by the way, also eat each other or their own. This everyone-eat-everyone situation also explains why the whole gang is so sensitive to sound and movement, including the sharks. Eventually, you learn that the only way to spot fish is by watching for flickers of movement or a fleeting shadow on the bottom.

7. The flats skiff is essential: About 16 feet long, the flats skiff looks like a shallow-draft, stripped down bass boat, with a footstool-like platform on the front casting deck, and a taller platform over the big outboard. After blasting out to the flats, the angler stands on the bow platform ready to cast, while the guide stands on the rear one. From there, the guide silently poles the skiff—electric trolling motors are for soft-handed freshwater anglers—across the skinny water, watching for fish from his higher vantage point.

8. Fish like a hunter: The flats are enormous, and while the fish can be plentiful, they’re also thinly spread out. That means casting is pointless, unless you or your guide can see a fish in range. Expect long stretches of roaming, watching and waiting, which can be surprisingly intense as you stand at the ready, scanning the water and rehearsing in your mind what you’ll do the moment the guide yells, “Permit, two o’clock! Sixty feet out, moving right! Three, two, one—cast!”

9. Remember where two o’clock is: I’ve known how to read a clock since at least Grade 2, yet in that adrenaline-fuelled moment when, after so much waiting, you get the command to cast in a certain direction—even though you probably can’t see the fish yet—it’s surprisingly easy to get muddled. I’ve even heard of one guide who was so tired of anglers blowing it that he painted a clock face on his casting deck.

10. The sun is unforgiving: While it looks idyllic, the tropical environment can be harsh and exhausting. Over the years, I’ve seen many photos of flats anglers wearing long sleeves, pants, face masks and even gloves. I thought they were, frankly, crybabies. Heck, part of the reason I was down there was to catch a few rays. But fishing the flats is not like lying by the pool, where you can find some shade or go inside if you overheat. On a skiff, there is nowhere to hide. After just a couple of hours, I gave in, and wrapped myself up like a mummy.

11. Mad casting skills help: On good days, you will  see lots of fish. That means plenty of casts and better odds of hooking up. But when the fish are scarce, you’ve got to really bring it. One day, my fishing partner was Conway Bowman, a Columbia pro staffer who pioneered fly fishing for mako sharks off San Diego, and now hosts the Sportsman Channel’s Fly Fishing the World. He made just one cast during our outing, dropping his jig just ahead of a jack crevalle, which was about 50 feet out and swimming diagonally away from us. And he made that cast in a 30-knot crosswind, with no warm-up, using borrowed gear. It was our only fish that afternoon, and it was not luck.

12. Don’t fuss over baits: For permit (and bonefish, even though we never saw one) we used only two types of bait: ¼-ounce shrimp-imitating bucktail jigs and toonie-sized live crabs, both of which we simply hopped across the bottom. For predators, we chucked what immediately became  one of my all-time favourite lures: the cuda tube. Deviously simple, it’s just a 12-inch length of bright orange or green surgical tubing threaded onto 90-pound wire, with a couple of treblehooks, and an egg sinker to enhance the action. In theory the tube imitates a needlefish, but really it’s one of those baits that looks like both nothing and everything.

13. If you like pike, you’ll love barracuda: Streamlined, silver and almost cartoonishly fanged, ’cudas look like they mistakenly got a gnarly set of snaggleteeth intended for a much larger, possibly prehistoric fish. And here’s how you catch ’em on the flats: drop a cuda tube somewhere ahead of the fish and zip it across the water’s surface, cranking the reel handle as fast as you can. If a barracuda wants the lure, says guide Mitchell Dugger, it’s not humanly possible to pull it away from him. These fish are capable of incredible bursts of speed and go berserk when hooked. I caught several in the 36-inch range, and every one of them launched like a missile and completely cleared the water up to six times during the five- to 10-minute fight.

14. It’s not about numbers:  During two full days on the flats, my group of 10 experienced anglers on five boats caught a total of two bonefish and zero permit. The first day, only my boat even saw a permit. That alone was considered good. And thanks to some heroic poling by guide Jared Cyr in ridiculously high winds, we followed that fish across the flats for five or six long minutes. Before it spooked, I got off about a half-dozen casts, two of which were close. According to Cyr, the fish sucked up my jig on one of those casts, but spat it out before I could act. This close call was treated as a heroic, toast-worthy victory. It felt that way, too.

15. There’s something about permit: Guides Dugger and Cyr joke about making their fortune with a line of permit-themed t-shirts featuring a smug-looking fish and the caption “@#$% permit.” Why? For  one, the hard-to-catch Keys permit are bruisers—20- and 30-pounders are common—with a mental state akin to 12-year-olds after drinking a case of Red Bull. With their laterally compressed bodies (think giant swimming hubcaps), oversized eyes and oddly prominent lips, permit look more alien than most gamefish. Yet when they’re feeding in the shallows, their scythe-like dorsal fin and deeply forked tail stick out of the water, making them feel tantalizing close. It’s a bewitching combination.

16. The flats will haunt you: After three years of trying, one of Dugger’s regular clients finally landed a permit on the fly. Including airfare, car rentals, hotels, tackle and guiding, the quest cost him almost $18,000. Madness. Or is it? Months after my visit, I can still close my eyes and recall every detail of the first permit I hunted. I remember the wind whipping my sleeves, the guide’s laidback drawl becoming an excited whisper, and the mix of nerves and elation when I, too, spotted the fish. And after it spooked, I remember watching that long, black fin disappearing into the distance. Waiting for my return.