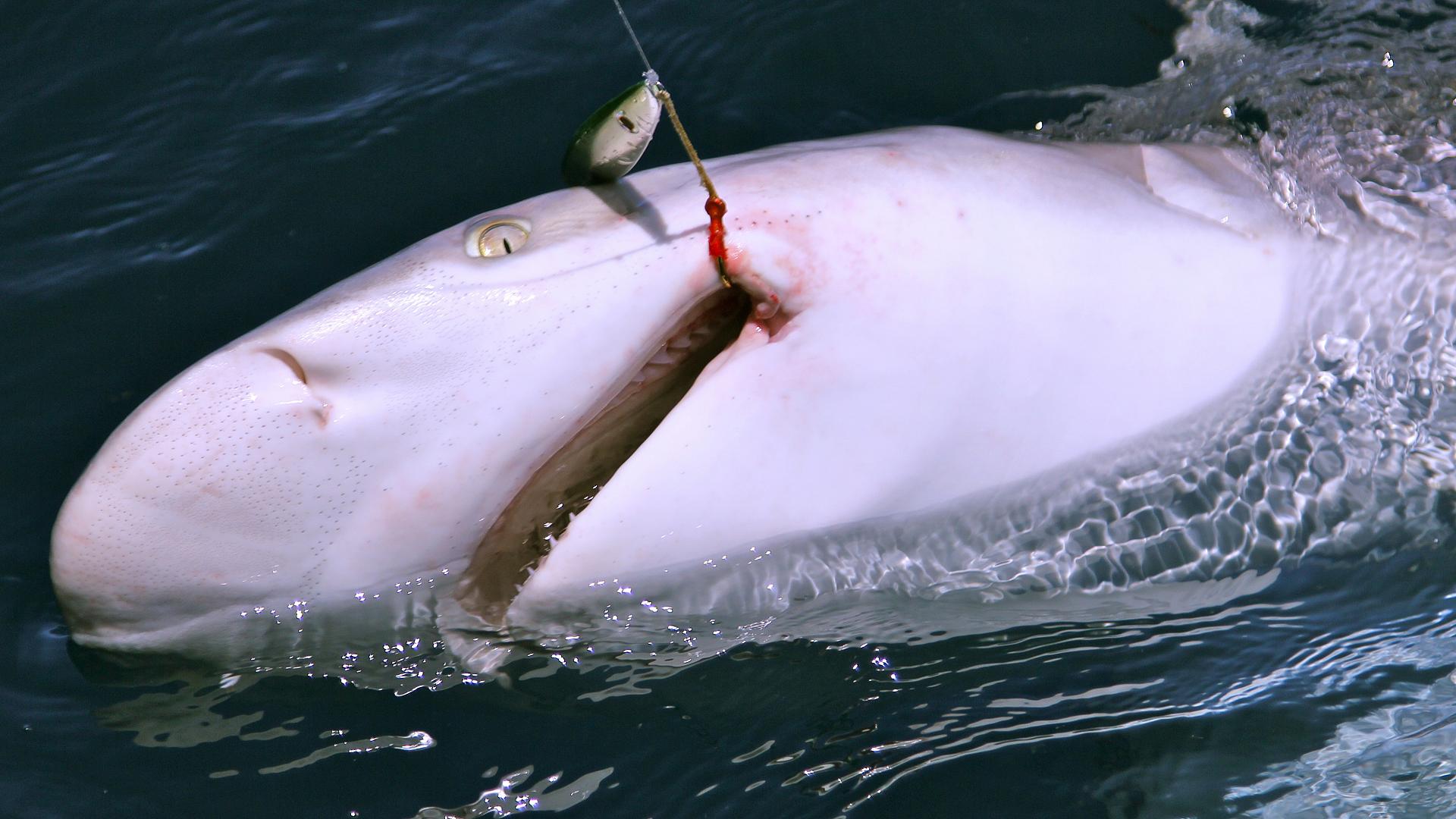 I continue flatlining, and with close to 200 feet of line out, I get a heavy, heavy hit, followed by a strong run. Poveromo speculates that one of the mutton snappers has come up shallow—something that’s unusual, but not unheard of—and taken my bait. The fish is tough, but after about 10 minutes, I’ve taken back more than half of the line I had out.

Then pow! As abruptly as flipping a switch, my quarry takes off for Cuba. I tighten the drag to maximum, but line keeps peeling off the reel faster than I thought physically possible. This change in behaviour is so dramatic the experienced saltwater guys aboard say the only reasonable explanation is that a shark has taken my fish, and likely gotten foul-hooked.

Poveromo asks me to break it off so everyone can resume fishing. I press my thumb onto the rapidly emptying spool, applying more and more pressure as the friction burns my skin. The line should break, but with the spool nearly bare, the fish slows, then stops its explosive run.

A half-hour later, the still unseen fish and I have settled into a rhythm. With my knees braced against the hull, and arms straining against the fish’s massive power, I let my body move with the pitch and roll of the boat. When the fish slows or stops, I apply pressure and take up line, turn by precious turn. When it surges, I let it run, watching yards of hard-won 20-pound braid disappear back into the ocean. Still, little by little it’s coming in.

Tuna are not ordinary fish. They are the ocean’s most elite athletes, perfectly built for power, speed and endurance

Not surprisingly, my fellow anglers are getting bored and restless, and just want to be done with this wretched shark. With the fish finally near the surface, someone hops on the gunnel for a better look and shouts, “George! It’s not a shark! It’s a goddam huge blackfin!” Now we all see it too—just visible under the rippling surface is a four-foot-long blue-black torpedo, with a baseball-sized eye. It’s easily 10 times the size of the blackfin I landed two days earlier. Then the fish sees the boat and sounds, unwrapping much of my line yet again. But now it’s a team effort. Someone digs the biggest gaff out of a locker, cameras are readied, and Poveromo stands at my shoulder, coaching every move.

“Stay calm,” Poveromo says. “But you should know, that’s one of the biggest blackfins I’ve ever seen. I had one a few months ago that was 43 pounds, and yours is about the same size.”

According to the International Game Fish Association app on someone’s smartphone, it’s almost certainly a line-class world record—and by a margin of pounds, not ounces. I’m concentrating so intensely I don’t really hear, because I know that tuna are not ordinary fish. These are the ocean’s most elite athletes, perfectly built for power, speed and endurance. Every piece of my grotesquely overmatched tackle—essentially a walleye outfit—is stressed to the breaking point. There is zero margin for error.

After almost an hour on the line, the fish is back to the boat again, where Poveromo waits, gaff in hand, like a coiled spring (above). Leaning dangerously overboard, he lunges, but the fish is just out of range. Poveromo lunges again. This time the gaff is short by inches. I’m trying to control the fish, but the rod is bent into a horseshoe, and I’ve got no leverage. The blackfin turns its head, and glides under the boat, where the line touches the hull, and parts.

Dizzy, numb and exhausted, I stumble back and half collapse onto the console. It’s the single most devastating moment of my angling life. Poveromo, clearly heartbroken, palms his face. And my friend, Todd Kuhn of Outdoor Life magazine, ready with a camera to record my triumph, instead photographs my despair (above). Except for one thing.

Why? Because that moment of loss didn’t diminish the thrill—the privilege, even—of spending an hour connected to such an amazing animal. What’s more, that monstrous blackfin, they tell me later, should never have been where it was; nor should it have gone for a hunk of dead bait. And using light gear, I should never have been able to stop it, let alone fight it to the boat. But that’s fishing, especially on the ocean, where anything and everything can happen, and sometimes does. Besides, what’s the next best thing to landing a world-record fish? Having a world-class tale about the one that got away.