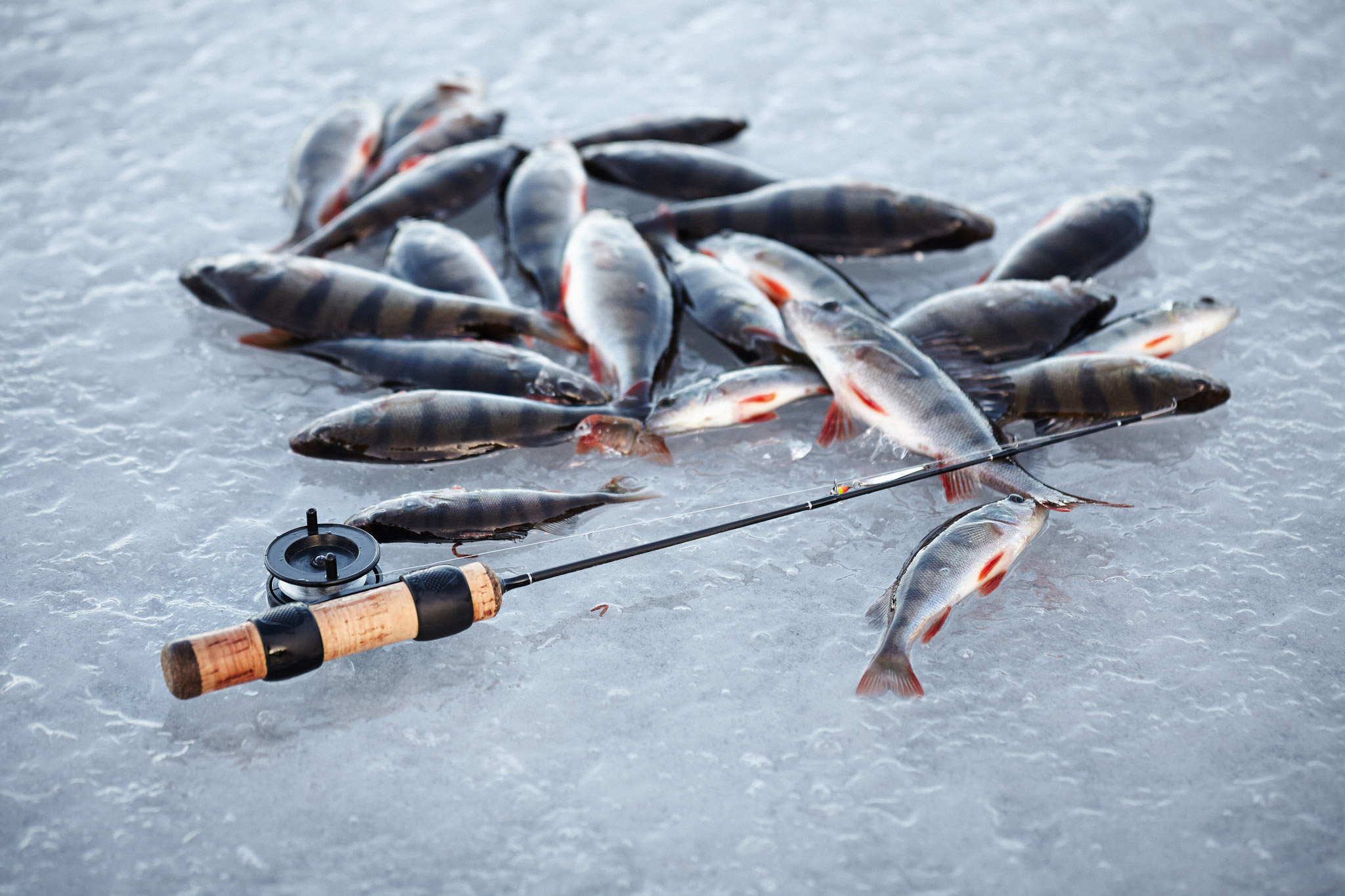 Now that you’ve got your ice-fishing tackle box stuffed with all the essential lures, here are 21 bonus strategies to further boost your chances of scoring big this season. Ladies and gentlemen, start your augers!

At first ice, you’ll find the fish relaxed and concentrated on prime spots-and eager to bite. That’s because they haven’t been hassled by anglers for several months and they’ve regrouped.

If you don’t have sonar, contour maps of the lake bottom can help. Or, if you’re fishing a lake that you also fish in the summer, you can return to some of your favourite shoals, humps and reefs.

When in doubt, it’s best to get your lure slightly above the fish rather than below them. That’s because fish eyes are positioned such that they’re usually looking up.

The way you attach a minnow head to the treblehook can make your spoons more effective. Instead of just running one of the tines through the lower jaw, slide the hook off the ring, then shove the eye through the minnow’s neck and out its mouth. That simple modification lets you flutter your spoon more naturally.

You can vastly boost the odds of a successful hookset by removing the bottom treblehooks on all your swim baits and replacing them with one size larger premium, supersharp hooks such as Gamakatsu and VMC cone cuts.

If you notice that most of the hits are coming on the set line when you’re using a tip-up in one hole and jigging in another, that’s a hint to lay out two tip-ups and forget about jigging. The same rule applies when you catch a fish while jigging, which is more often the case.

Double jigging works for most fish, but I find it particularly useful for suspended lake trout. It’s even more deadly when you fish for competitive panfish, such as perch and crappies.

Regardless of where you’re fishing, remember that walleye and sauger eat other fish, especially perch, ciscoes and smelts—and that means they lie in ambush along the edges of moderately to sharply breaking structure.

Winter walleye usually hang near the bottom, but keep your eyes glued to your sonar for high fliers. If you spot one, reel up quickly and stick your lure in front of its nose.

Some lake trout anglers have a tendency to sit in one spot too long, when they really need to drill a hundred holes a day over a dozen or so different spots. This requires a lightweight, super-sharp ice auger, or you may collapse before noon.

On the days trout play hard to get, clean their clocks by dropping a light 3/16- or 1/4-ounce jig.

Trout and walleye can be spooked by any racket on the ice, so keep surface noise to a minimum.

Pike position themselves along transition areas, so stay out of the weeds and instead target weed, rock and current edges, as well as main-lake drop-offs.

When you miss a pike, don’t rush to check the bait. Instead, keep jigging for a few minutes. If you’re using a dead bait, jiggle it ever so gently. Usually the pike is staring at your bait or lure, and when you rock it, the fish will strike.

If the action slows down when I’m pike fishing, I’ll purposely run a snow machine around the area I’m fishing-even between the tip-ups- to try to get the pike moving and increase the chances they’ll see one of the baits.

In shallow, featureless panfish lakes, it’s important to fish each hole, because perch and crappies hug the bottom so tightly, your sonar sometimes can’t pick them up.

In larger panfish lakes, crappies usually hover 10 feet or more off the bottom in open water adjacent to structure. Find the crappies, and the perch will be clinging to the bottom in the same spot.

If you find an active school of suspended, oversized slabs, they’ll sometimes (typically toward last ice) wallop a tiny spoon, such as a silver 1/7-ounce Williams Wabler.

Take advantage of the gregarious nature of panfish. Once you find one, you’ll find a bunch. So when you or your partner catches a fish or two, drill another hole right beside the productive one. You can even try to jig two lines in the same hole. As one angler reels in and unhooks a fish, the other lowers his line and catches another.

In most perch waters where the fish grow huge but are ignored, or when they’re excited, active and aggressive, I prefer bigger lures. My favourites include the W30 Williams Wabler (silver/gold) and the smallest Jigging Raps (which you normally wouldn’t use).

If you plan on releasing a fish, avoid exposing it to the ice-cold air for any longer than is necessary. You also shouldn’t drop the fish in the snow or lay it on the ice for lengthy periods. If possible, it’s best to release the fish without ever taking it out of the water.