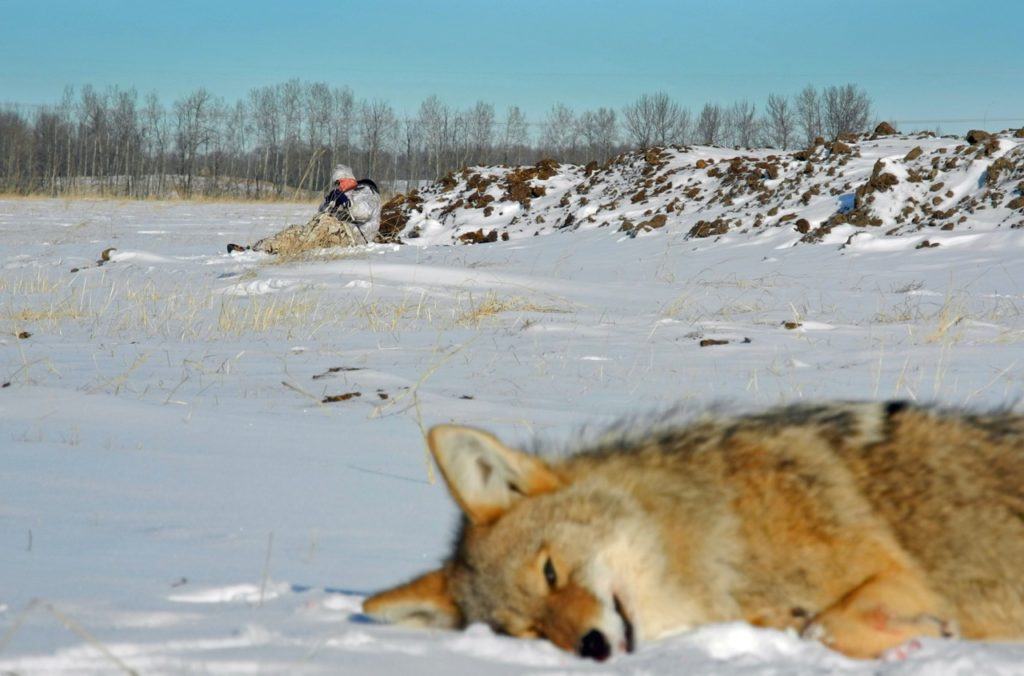 If you know there are coyotes nearby, and you have the wind figured out, the next step is to determine where to park your butt. The downwind area of a calling site is the kill zone, so it’s best if your set-up is slightly elevated. Coyotes can recognize the human outline from a long distance, so be sure your silhouette is broken up by the likes of a weed-choked fenceline or some shrubs.

Sometimes, however, there’s no cover to break up your outline. A skilled coyote hunter I know often calls from a prone position on top of a knoll, always watching downwind. I get too uncomfortable doing that, so in such a situation, I drop below the crest of the rise and lie on my back instead. With my head and shoulders supported by my pack, I can remain comfortable while I keep watch downwind.

Always set up against a backdrop that breaks up your outline, so wary coyotes don’t spot you

When choosing a set-up location, you also need to consider how far you need to see. The distance a coyote will circle downwind of a caller varies based on the terrain and how educated the coyote is to calling. Several times in wide-open country, I’ve seen coyotes show up as far as 400 metres downwind of my position. In areas with some tree cover, however, most coyotes are content to catch the scent within 100 metres or so. To keep the odds in my favour, I like to see a wide arc of open country, at least 200 metres downwind.

On the morning I shot those three coyotes, for example, I had a great vantage point from my elevated position, where I sat with my back against a clump of trees. I could see there were many more coyotes in the area, so I called up some friends and returned with them two days later. In the predawn darkness, we set up along each of the coyote escape routes I’d discovered earlier. Then when the sky lightened and the coyotes started moving, we killed eight in 90 minutes. With at total of 11 coyotes taken out of the pack in just 48 hours, it was clear the farmer had a problem—and I was more than happy to help solve it. 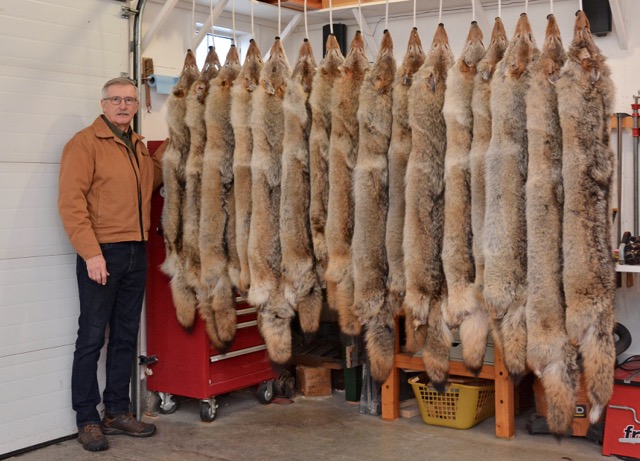 The fickle finger of fashion has determined that coyote fur is currently desirable as trim for parkas, putting coyote prices at an all-time high. So, not only does coyote hunting help farmers, it can also earn you some cash. At a recent fur auction, for example, my pelts sold for an average of $162 each, with one fetching $231.

I skin all my coyotes and prepare the hides myself, so I reap the full rewards. Many hunters don’t have the time or the place to do all that work, however, so they sell their coyotes to a buyer, or pay someone else to process the hides. Both are perfectly viable options if permitted by your local game laws, so be sure to check.

Don’t expect every coyote you shoot to be a money-maker, though, as there are a lot of poor-quality furs stalking the woods. Mange, fleas, mites and other infestations can make any coyote worthless, as can the use of guns and ammo that aren’t fur friendly. So, consider the income side of coyote hunting as a bonus. You shouldn’t expect to buy a new truck with the proceeds, but maybe a new rifle.