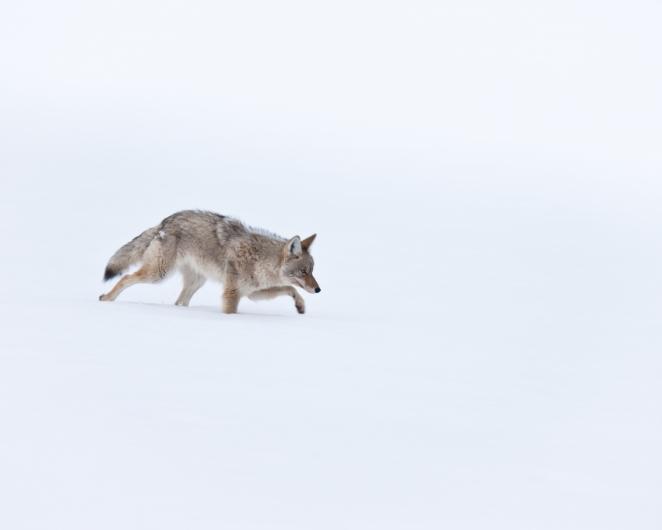 It’s remarkable how popular coyote hunting has become. A mere 10 years ago, it was only something we did in the off-season when there was nothing else to pursue. But more recently, many hunters have become predator specialists, and there’s an ever-growing number of television programs, publications and websites dedicated specifically to hunting coyotes.

I’ve also become caught up in the predator-hunting madness, and I find myself allotting more time and resources to the pursuit of Canis latrans. Not only is coyote hunting addictive, it also allows me to play a key role in the management of these wily predators, just as I do in managing ungulates.

And here’s the bonus: Coyote fur prices have risen substantially over the past couple of years, so getting out and hunting them is not only enjoyable, it can also be profitable. This is especially so from November through February, when the coyote’s winter coat is at its prime. So, don’t feel blue about the end of deer season. Instead, get out and start calling in coyotes. Here’s how.

Without question, calling is the preferred method for hunting coyotes, and call manufacturers are partly behind the recent surge in the sport’s popularity. Regulations across Canada vary as to the legal methods of calling, but where allowed, electronic callers are king. These devices were legalized in my home province of Alberta only two years ago, and already a staggering number of hunters are using them.

Electronic callers provide several advantages. First, the variety of calls is overwhelming. This is helpful when it comes to coyotes that have been called a lot—you often need to try many different sounds until you find one that piques their interest. Rabbit-in-distress calls are the staple of coyote hunting, but there are times of the year when adding in some crow and magpie calls, or even a few coyote howls, can really improve your odds. Electronic callers give you that versatility, even allowing you to simultaneously play more than one type of call.

The other advantage is that you can place an electronic caller some distance from your set-up. In areas where coyotes hear a lot of calls, they can be very timid coming in, so it’s advantageous not to have the hunter situated right beside the origin of the calls. In some of the places I hunt, I often place the caller 100 or more metres away from where I’m sitting with my rifle.

Another trick I regularly employ is to put a decoy beside the electronic caller. This can be as simple as a piece of rabbit fur hanging from a stick and blowing in the wind, or as complex as an electronic decoy (where legal, of course). The decoy just adds that final degree of realism to your set-up. When a coyote is coming in to a call, he expects to see movement. In fact, I now rarely use an electronic caller without also using some sort of a decoy.

Some coyote hunters still prefer to use mouth-blown calls, and there are a few regions where electronic calls are not yet permitted. In some more heavily hunted areas where the coyotes are getting accustomed to the electronic versions, mouth-blown calls can actually provide an advantage. And I must admit, I sometimes enjoy fooling a wily wild dog the old-fashioned way.

For whatever reason, the non-stop calling of electronic calls really seems to bring in coyotes. While a lone human caller cannot come close to matching the cadence of the electronic devices, two people calling in tandem can. This is also a good time to mix up your calls, and try two different sounds in the same calling sequence. For example, I’m a big believer in adding some magpie and crow calls to the mix. This seems to give the coyotes confidence—and seal the deal.

I rarely set out decoys when I’m using a mouth-blown call. Coyotes have an amazing ability to pinpoint the exact source of sounds, so I don’t want any extra movement giving away my location. And if I place the decoy some distance away from where I’m calling, the coyotes will sense that something isn’t right. The best bet when mouth-calling is to simply remain totally concealed.

Location is the most important factor when it comes to setting up and calling coyotes. These predators love to spend their days in cover that’s fairly heavy, yet adjacent to more open areas. Look for a willow-choked creek running through a big meadow, a deep coulee on the prairies or a woodlot in farm country, for example.

Mice and small rodents are the major source of protein for coyotes, and these open areas offer a never-ending buffet. There are also seasonal food sources to consider—a large pasture filled with calving cows or lambing sheep is a magnet for these carnivores (see “Spring fling”). Find any such area and you’ve found a place for a quality set-up.

When using an electronic caller, I like to set up on the edge of the cover and use the wind to force an approach through the adjacent open area. Coyotes will typically arrive from downwind, so it’s just a simple matter of setting up so the open areas are directly downwind. The perfect situation is to allow the coyote to use cover to get close, then force it into the open for the final approach. If you try to push the coyote too far into the open, however, you’ll definitely reduce your chances of success.

With this technique, you need to do everything possible to mitigate your scent. But if you set up the electronic caller and decoy at least 100 metres away from your position, you’ll typically have loads of time for a shot.

As for using mouth calls, I find it’s much more of a close-range game, typically at its best in heavier cover. I try to force coyotes to approach from upwind. By exploiting the topography of the land, it’s often possible to block a downwind approach. Set up where there’s a water body, some steep terrain or any other natural barrier downwind of your position—this will help prevent your scent from giving you away, even at closer ranges.

I like to call from one location for at least an hour before moving to the next. This allows even the most timid coyote plenty of time to come in. Move at least two kilometres when changing calling locations. Coyotes have very acute hearing, and making small moves between locations will only serve to confuse them.

Typically, I’ll set up in a couple of different locations in the morning and a couple more in the late afternoon. Coyotes can be called in during midday, but the shoulder hours are more productive.

When you do shoot a coyote, don’t be in a hurry to retrieve it or change locations. If one coyote comes in, there are likely more nearby. On numerous occasions, I’ve taken as many as three coyotes on a single set-up.

For coyote hunting, I’m a big fan of the semi-auto rifle chambered in .223. While our options in Canada are limited, the Benelli MR1 is fast becoming a favourite among coyote hunters. Almost any rifle will do the job, but the semi-auto allows for a fast shot on a second coyote. Plus, it’s a great excuse to buy a new rifle. To minimize damage to the coyote’s hide, team up the semi-auto with quality varmint bullets, such as the Hornady V-Max.

When mouth-calling, there’s always the possibility of a close-range encounter with a coyote. So, if you’re hunting in a party, it’s a good idea for one of you to also carry a shotgun. A semi-auto with a full choke is the perfect choice, and most varminters seem to prefer a fairly large shot size, such as 00 buck. Coyote hunting has become so popular, in fact, that Hevi-Shot is now making a dedicated coyote shell for 12-gauge shotguns.

A Breed Apart: Coyotes range from coast to coast, and unlike whitetails— with the Prairies boasting the biggest trophies—it’s in the East where coyotes grow largest. There’s some evidence to suggest eastern coyotes share DNA with wolves, and they’ve been known to weigh more than 50 pounds. You’ll often hear eastern coyotes referred to as coywolves, in fact. Western coyotes, on the other hand, rarely top 35 pounds.