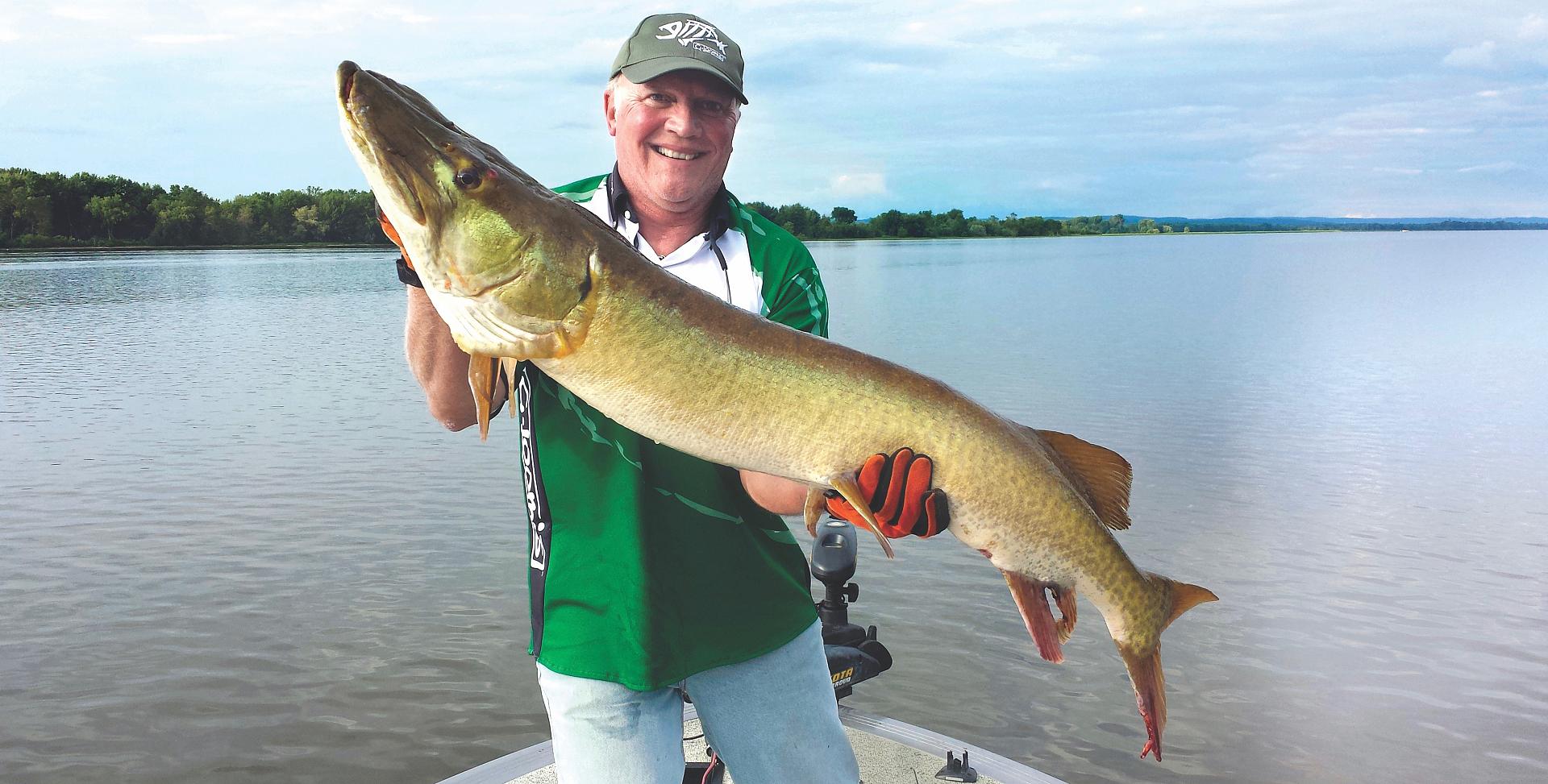 How studying current will help you consistently catch monster muskies

Want to consistently catch monster muskies? Pay attention to the way the water flows—and how these predators relate to it

Whether they like to admit it, most muskie hunters spend the better part of their lives searching for a magic bullet—an elusive can’t-fail bait that attracts big toothy critters and triggers them to bite, no matter the time of year, location, weather or water conditions. Of course, that bait doesn’t exist, and it likely never will. That’s why an ounce of biology is worth of pound of lures.

Consider the relationship between big water wolves and moving water. When you trace the muskie’s genealogy far enough back, you quickly discover the legendary fish of 10,000 casts is, in fact, a river monster, evolved to live in current. That’s why some of the very best muskie fishing is found in rivers such as the St. Lawrence, Ottawa, Rideau, Niagara, St. Clair, French and Winnipeg.

Even in top muskie waterbodies such as Rainy Lake, Eagle Lake, Lac Seul, Lake of the Woods, Lake Nipissing and the famous Trent-Severn Waterway, moving water influences every aspect of a big muskie’s life. That’s why experts like southeastern Ontario muskie whiz Wally Robins and legendary Ottawa River guide John Anderson say you must first study the way the water flows to find the fish. Learn to do that and you’ll soon forget all about looking for that magic bullet.

“The first time I filmed with the boys from the Fish’n Canada Show, I covered about 50 kilometres of the Ottawa River and hit all of my best spots,” recalls Anderson, who owns the Ottawa River Musky Factory guiding service. “Afterwards, Pete Bowman commented that every location I chose was either a current seam, current split or current eddy.” Although Anderson probably knew it instinctively, he says it wasn’t until that particular moment that he noticed how important current was to almost every one of his hot spots.

The way Anderson sees it, current profoundly affects where muskies go to feed and rest. In rivers, that influence begins early in the year when spring rains and runoff increase the current and muddy the water, impeding the quantity and quality of weed growth. When that happens, he says, the beds never get a good foothold, limiting the available habitat for both muskies and the fish they feed on. This effect is most intense on mid-river structures, Anderson adds.

Like Anderson, Robins also says current is the single-most important factor informing his decisions about where and how to fish. “Every waterbody has a degree of current,” he says. “In rivers, it’s more visible. But trust me, your secret little gem of a muskie lake has moving water in it when the wind blows—and nothing affects the muskie bite more.”

Not surprisingly, Robins has already been surveying water conditions for at least a month before the June opener. He says the high water levels associated with strong currents typically bring chillier than normal water temperatures, leading to a delay in the spawn. That in turn means a slow start to the season, Robin says, because the large females—it’s rare to catch a male longer than 40 inches—take so much longer to recover from the egg-laying ordeal.

In a curious twist, the same cloudy water that negatively impacts muskie-fishing conditions early in the season can bring relief during the summer. “Big summer storms and high water add instant turbidity to a system, creating new opportunities for anglers in the form of mixed water lines and edges,” Anderson says. “Baitfish flock to the dirty brown water because they feel safe hiding in the shadows.”

Having fished several times with Anderson on his beloved Ottawa River in the Prescott-Russell region immediately below the nation’s capital, I can tell you he obsesses over baitfish. But you might be surprised by which ones he fixates on the most—finger-sized emerald shiners. These baitfish hang out in large schools seeking out low-current areas, and this drives fish behaviour in the Ottawa and many other river systems, Anderson says.

“Everything eats emerald shiners, and muskies eat everything,” he says. “So, if you can find the current zones that are concentrating the shiners, you’ll find the muskies. Eddies, in particular, are pure gold, and you’ll find more eddies when the water is high and moving.”

The effect of current is especially pronounced in the fall, when a smart muskie angler can clean up by also fishing the seams. “As a muskie guide, I make my living by fishing the slack-water side of current seams,” Anderson says. “This is where big fish rest and enjoy an endless supply of food floating by. It’s easy eating, and muskies are all about easy eating.”

The stronger the river current, the more likely you are to find muskies positioned on the bottom where the flow is reduced, Anderson says. Even in fast-flowing water, a muskie can hide behind seemingly small boulders, resting or even sleeping as it waits for food to flow to it. Most anglers fail to realize that virtually all the fish in a river are facing upstream, he notes, and the more current there is, the more this is true.

Locating current areas with fishing potential is one thing, but positioning your boat so you can fish them properly is quite another, especially since pinpoint casts are crucial to pick apart the best ambush locations. Indeed, this boat-control challenge is why many anglers view current as a negative.

According to Anderson, a powerful 36-volt electric trolling motor mounted to the bow of your boat is essential for taming current. He approaches key targets slowly, typically travelling into the flow. This lets his clients make multiple casts to the highest potential locations—the sweet spots on the spot—rather than throwing a couple of hasty Hail Mary flips as they drift past.

When casting, make the most natural presentation possible, Anderson says. That means using a jig or a weighted lure so your bait mimics the way food naturally flows downstream with the current. “Fly anglers use current to guide their flies to the fish. Muskie anglers would be wise to do the same thing.”

River eddies can also be used to help control the boat and stay on the fish. “If you can find a big eddy in a river in the fall, you can stop your boat in it and let the current push you around in a circle,” Anderson explains. “You don’t even need to use your electric trolling motor to manoeuvre, giving you the added element of stealth.”

It’s worth noting, too, that muskies associate strongly with the same current-impacted structures and cover throughout the entire season. That’s one of the ground-breaking conclusions of post-graduate researcher Sean Landsman, who tracked 30 radio-tagged muskies in the Ottawa and Rideau Rivers. So, what makes a good location? Landsman says the bigger and more complex the structure is, the greater its potential to harbour muskies all season long.

Keep in mind that while current may be constant in a river, it’s only fleeting when produced by a strong wind on a lake. When Robins encounters wind-induced current in lakes, he parks his boat on the protected side of structure or cover and fishes the calmer water. “I don’t think a muskie, especially a big one, wants to spend time or energy battling the current produced by a howling wind, especially when it can lie in wait in shallow water.” And the baitfish a muskie is waiting to ambush will also avoid such current.

Robins’ go-to presentation for fishing moving water is to cast a soft-plastic Magnum Bulldawg and let the current swing it through key fish-holding spots. The bait is heavy enough to stay down near the bottom while the current washes across its body, imparting action on the long tail. A Red October-type tube jig is also dynamite, he says, adding you have to experiment with jig heads of different weights until you find one that takes the bait down in the current without continually hanging up.

While current may frustrate many muskie anglers, Anderson and Robins view it as an ally. And just like the big toothy critters they pursue with such passion, they’ve learned how to read the water and capitalize on it. Do the same thing this fall and you’ll also come to view current as your new best friend. 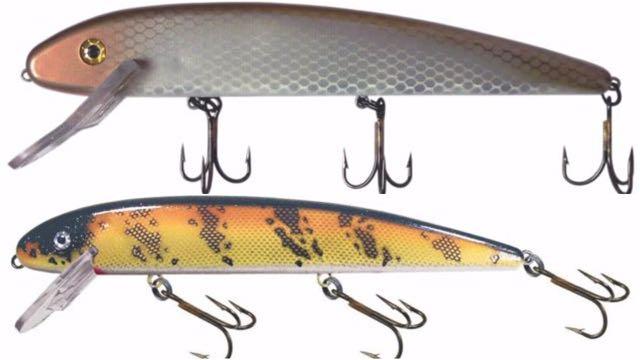 Ottawa River muskie guide John Anderson says trolling can be a highly productive fall tactic, but it requires careful planning, as you need to factor in the speed of the river current and its influence on the action of your lure. If you’re trolling downstream at 5 km/h and the current is running at 1.6 km/h, for example, the water will flow over your bait at only 3.2 km/h. On the other hand, trolling upstream at 5 km/h means your lure is experiencing 8 km/h of current, and has 150 per cent more action. With all this in mind, Anderson says it’s important to know the speed at which your lure performs best, then use the current accordingly. “Big baits such as the Grandma Lure and Musky Mania’s Jake have little or no action when you troll them slowly with the current,” he says. “But turn the boat around and it’s a completely different presentation. So, slow-speed trolling is generally more effective when you troll against the current.”