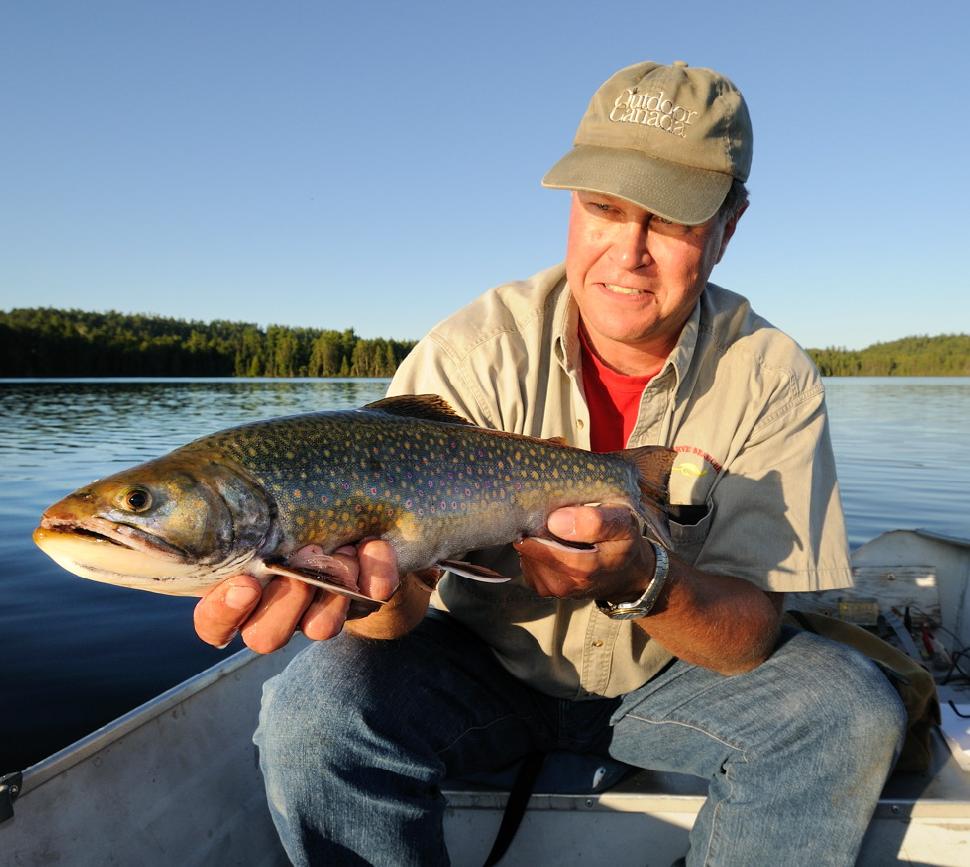 With summer in full swing and the fish biting like crazy from one end of the country to the other, there is no lack of fishy things to talk about these days, which brings me to two interesting questions from Outdoor Canada readers.

The most intriguing one comes from Armand, who e-mailed me the following:

“I read your blog post about “How to know if trout are safe to eat” with much interest. About a month ago my wife, son, daughter-in-law, grandkids and I all went camping and fishing. My wife and I got two brook trout one afternoon and decided to keep them for supper that night.

While I know it’s not a good habit, I kept the fish on the bottom of the boat for a couple of hours, then went in to clean them and put them on ice. It was a cloudy, cool day. About 2 hours after eating the trout, like clockwork, everyone that ate the trout was violently sick, and diarrhea and stomach cramps for the entire night. Everyone that didn’t eat the trout was fine.

Have you ever heard of anyone getting so sick from eating trout? Could the trout have spoiled from being on the bottom of the boat? I’ve done this many times in my life when I know I’ll be out on the water only a short time. I’ve never been sick before from doing this. I would be interested in knowing your opinion on what happened.”

Well, Armand, I consulted a doctor friend of mine who confirmed that from the sound of things, the folks who were ill after eating the trout likely had some form of food poisoning. The fact that everyone became ill so quickly is apparently a food poisoning giveaway.

However, it doesn’t necessarily follow that the speckle trout were the culprits. Indeed, from my experience, like yours, I have eaten plenty of fish handled the same way will no ill effects.

Indeed, I am willing to bet that the illness had nothing to do with the fish per se, but rather with the lake water in which you cleaned and/or washed the fish.  My guess is that there was a virus or bacteria in the water that was subsequently transferred to the fish flesh and that wasn’t killed during the cooking process.

As I am sure you’re aware, there are so many nasty viruses, bacteria and pathogens in lake water that anglers and campers are cautioned never to consume it—even in the very far north—before boiling it and/or treating it properly.

So, the verdict from the “fish doctor” is that the speckle trout were fine, but that the water (or the knife used to clean the fish) were not.

“My uncle Bob and I are going pike fishing and I was wondering if you could give me some tips on what kind of tackle to use. Thank you. P.S  I think you are the best fisherman in the industry!”

Well, given Noah’s post script, how in the world could I possibly ignore his request?

For starters, Noah, there are several things you should keep in mind that will help you quickly locate the biggest and most pike in the lake.

Second, pike are ambush predators that like  to hide in and around cover, especially deep weedlines and large boulders, and pounce upon unsuspecting prey.

Third, you will double, possibly even triple your catch when you fish on cloudy, overcast, dull days than you will on bright sunny days.

Indeed, famed esocid researcher and good friend, Dr. John Casselman spent years raising and feeding pike in a laboratory, where he used dimmer switches to increase and decrease the light intensity, mimicking the daily cycle of dawn and dusk. As John increased the intensity of the light, the pike would go down to the bottom of the tanks, but when he decreased it, the pike would rise up and become active.

As John told me, “I could move them up and down like a rheostat by adjusting the light. Now remember, pike are visual feeders, so when they move up in the water column and over vegetation their ability to feed is immensely greater.”

Finally, I find there is no other fish that responds as positively to the wind and waves as northern pike. I am sure this is related to the point above, insofar as the wind and waves decrease the amount light entering the water. So, when I am pike fishing I always try to concentrate on the best spots that have wind and waves blowing into them.

Now, as for the best tackle, Noah, I generally prefer 6′ 8″ to 7′ 6″ medium and medium-heavy baitcasting rods when I go fishing for pike. I generally spool the reels with a good braided line testing in the range of 20- to 30-pounds. And I always use a leader when I am fishing for toothy critters like pike.

If you’re not proficient or confident using baitcasting equipment, you can still catch pike with spinning gear. In this case, I would stick with medium-heavy and heavy action rods and would recommend a slightly larger, higher capacity, 3000 or 4000 series reel, spooled with the same braided line and leader.

With these outfits you should be able to cast buzzbaits, spinnerbaits, jerkbaits, spoons and larger in-line spinners like the dressed Mepps Aglia #5 and Giant Killer bucktail, as well as soft plastic jerkbaits and swimbaits like X-Zone Tackle’s new Mega Swammer.