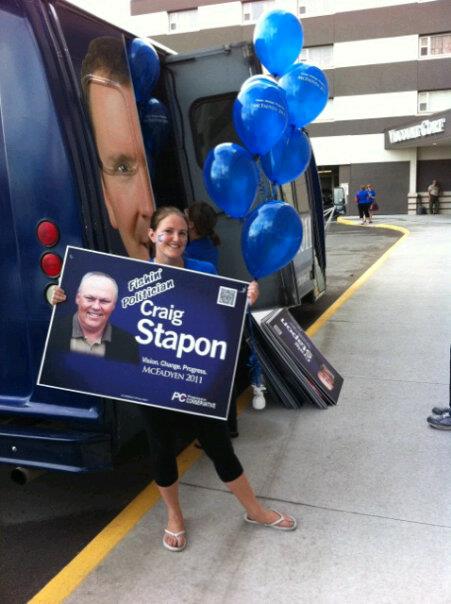 The sign says it all Craig Stapon, The Fishin' Politician. Ya' got to love it!
FishingFishing Tips & Tactics

One of the most enjoyable perks writing for Outdoor Canada Magazine, the only national fishing and hunting magazine in the country, is that you get to meet some wonderful people.  Ordinary, down-to-earth folks who simply love being outdoors.  Two of the nicest people I’ve ever had to the pleasure of bumping into are Allen and Helen Crane.

I first met this Manitoba-based, fish-crazy-couple about 15 years ago when I was presenting seminars at the Mid-Canada Boat Show in Winnipeg.  They came up after one of the presentations, Helen holding a copy of Outdoor Canada Magazine, Allen clutching a stack of glossy photos.  (These were the days prior to cell phone cameras and digital images.)

Anyway, I’d just written an feature in the magazine about ice fishing for northern pike, using quick strike rigs and large dead baits, and Allen and Helen wanted to talk about the various rigging options and tactics.  More importantly, I think, they wanted to show me the photos of the giant pike they were catching while ice fishing in the Whiteshell Provincial Park.

It was the start of a long and truly enjoyable relationship.  Indeed, Allen and Helen still drop by when I am doing seminars at the spring boat show each March, and now that we’ve graduated to e-mail and digital images, two or three times a year they send me a message.  And I have to confess, I always smile when I first see who it is from, because I know it is going to be about something fishy, unusual and impressive.

A huge tiger trout that they caught in the parkland area of the province, perhaps, or, as was the case the other day, some mighty impressive bluegills.

That is right, bull bluegills on the prairies!

To be honest, I didn’t know bluegills were present in Manitoba, but as usual, Allen set me straight.

“Helen and I had a blast last Sunday,” Allen reported, “catching about 30 bluegills in Lake Metigoshe.  Only three of the fish were under 7- inches while the rest were big bulls.  We were fishing close to pencil reeds in six to ten feet of water, using 1/8th ounce jigs tipped with half a crawler.  I was casting and retrieving the combination while Helen was suspending her jig beneath a bobber.  It was important to keep your bait within six inches or so of the bottom.  There are only two places in Manitoba where you can catch bluegills.  Metigoshe, where we were fishing, and the La Salle River.”

So cool!  I can hardly wait for Allen and Helen’s next e-mail message.  Piranhas in the Grassy River no doubt.

Sticking with our Manitoba theme, another Outdoor Canada reader who has become a good friend over the years is Donovan Pearase.  Donovan runs Blackwater Cats guiding service

www.blackwatercats.com .  He specializes in catching the huge channel cats that frequent the Red River in the summer and the massive “greenback” walleyes that run into the Red and Winnipeg Rivers in the spring and fall.

I first met Donovan when he, too, introduced himself after I’d finished a seminar at the Mid Canada Boat Show one year, and just like Allen and Helen, he was clutching a handful of impressive fish pics.  And when I say, impressive, let me tell you, the channel cats he puts his clients on every day of the season are mind boggling.  If you’ve never caught one of these massive whiskered felines, you need to call him and experience something you simply cannot do anywhere else in the world.  The channel cat fishing in the Red River is extraordinary.

The images Donovan sent me the other day are equally remarkable, but for a much different reason.

“Hey Gord,” Donovan started his message, “There is an interesting thing going on right now.  The channel cat bite is really heating up but that is not what is perplexing me.  Some of the cats we are catching are stuffed fat.  That is not unusual for this time of the year, either, as they normally put on the feedbag as they get ready for fall and winter.  What is strange is the fact that some of the females we are catching have swollen red vents like we see in the spring when they’re spawning.   On top of that, my guest last night caught a really fat male that was only 34.5 inches but weighed 26-pounds.  It spewed milt all over the boat.

“I am no biologist,” Donovan continues,  “but this is very odd.  The cats usually spawn in late June and early July.  I am wondering if these fish have waited until the river levels in the Red (which has been in flood condition for much of the summer) have returned to optimum conditions before trying to spawn? I would love to get your input on this and hear what you have to say.”

Donovan copied his e-mail message to me, to the folks at the Manitoba MNR and I’ve sent it along to some of the fisheries guys in Ontario which whom I used to work.  It is weird and bizarre catfish behaviour to say the least, but it points out just how little we really know about most of our favourite fish.

And talking about weird behaviour, it is the perfect segue to buddy Craig Stapon, “The Voice of Fishing In Manitoba” and a Manitoba fishing institution.

We did a “profile” on Craig in the magazine a couple of years back and as everyone who knows him will tell you, he is a “character”.

That is why, when I spotted an e-mail from him in my inbox the other day, I smiled and then, with more than a little trepidation, opened it up.

“Thought you’d enjoy seeing this one,” Craig wrote.  Then he instructed me to, “Have a close look at the sign.”