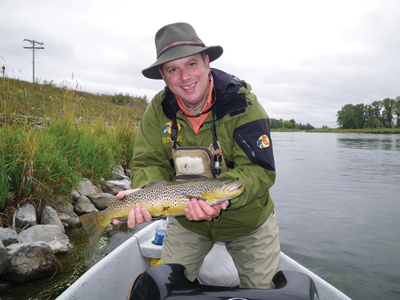 Hottest Spot: Downstream of the weir and water treatment plant

Why We Chose It: In 2012, ranked #3 in all-time hot spots. This world-renowned river fishes well from Banff to the Oldman River, but the most exceptional waters run through, and just downstream of, Calgary. Here, browns and ’bows exhibit an extraordinary growth rate, with five-year-old fish topping 20 inches, and wily old-timers pushing 10 pounds. Any river where you can land a trophy trout on light tackle, literally a couple of blocks from world-class dining and hotels, definitely qualifies as an all-time hot spot.

It’s mind-boggling to think you can regularly catch bruiser browns—some over eight pounds—within a city of more than one million people. Then again, the Bow is one of the world’s top trout rivers, and several kilometres of it just happen to flow through Calgary. In fact, that’s one reason the fishing is so good: the water is rich in people-produced nutrients, which in turn create a considerable amount of good cover and trout food in the form of insects and smaller fish.

I once caught a 22-inch brown trout of about five pounds—locals generally refer to Bow trout in inches, not pounds—within metres of a major Calgary thoroughfare. Against an unlikely soundtrack of road traffic and roaring jets, I fooled it with a black size 4 Woolly Bugger. Before slipping the fish back into the surprisingly clear water, I marvelled at its size and brilliant, butter-yellow, brown-spotted flanks.

And when the brown trout aren’t biting, there’s a good chance you’ll hook into a broad-shouldered Bow River rainbow, mountain whitefish or some other species. Years ago on a float trip for browns with noted fly-fishing writer John Gierach, for example, I caught a 24-inch northern pike. Gierach glanced with contempt at my catch, and snidely proclaimed “Nice pike.” I’ve never caught another Bow pike since, but I have landed many more bragging-sized browns—all within Calgary city limits.

Species and Why We Chose It: In 2009, Brown trout; A chance to catch a big fish on hardware.

When to Fish: Early spring is best, before the water gets muddy

Where to Fish: Fish the riffles around the sides of islands, and the tail-outs.

Species and Why We Chose It: Rainbow trout; On a good day, you can catch a large number of quality fish, with a very good opportunity for a 20-plus-incher

When to Fish: Early spring is prime, before the water gets muddy.

Where to Fish: Work the deepest pools, riffles and tail-outs of islands.

Species and Why We Chose It: In 2008, Brown trout; Large native fish weighing up to 12 pounds

When to Fish: September.

Where to Fish: Find slow-water pockets with lots of floating weed cover.

—Don Freschi, host of Sport Fishing: On the Fly

Species and Why We Chose It: Rainbow trout; Incredible scenery and huge fish

When to Fish: June during heavy runoff, or late summer/early fall.

Where to Fish: Southeast of Calgary, back eddies and seams during runoff or tight to the banks in the fall.

Tip: In June, dead-drift black streamers such as Woolly Buggers or Kaufman stoneflies along seams. Later in the season, cast big hoppers and caddis tight to the banks.

—Connor & Michael Gelinas, host of Fishing with the Dodger