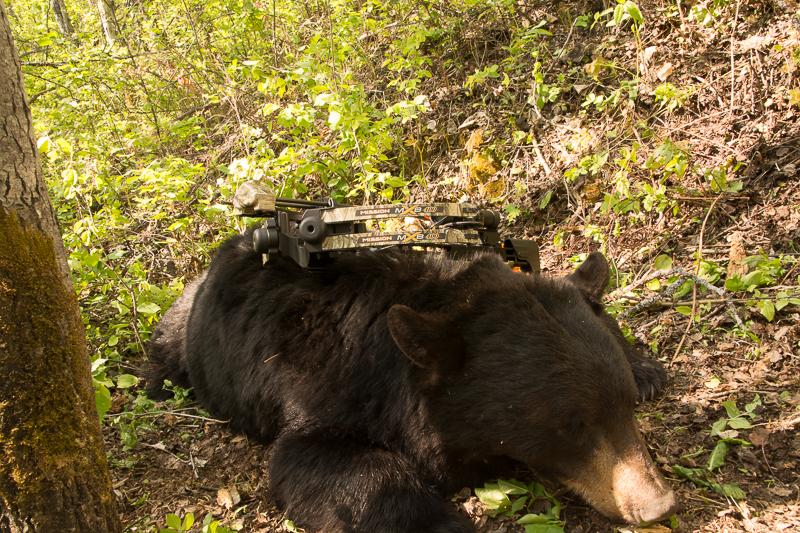 How to Bowhunt for Big Boars Late In the Spring Season

Getting close enough to arrow big bears is no easy feat.  Patience, preparation and a little bit of luck all factor into a successful hunt.

Bowhunting big boars late in the spring season? Here are 4 things you need to know to have a successful hunt

Boone and Crocket calibre (skull width & length measures 21” combined) bears do not come easy and involve hours of waiting with no guarantees.  Often specific bears appear year after year and bowhunters hunt as often as possible in hopes of getting an arrow off.  This past spring, my friend Gary Gillett (founder of the hunting film tour) and I estimated just how many hours on average it takes to arrow a Boone and Crocket calibre bear.  We figured good Alberta outfitters running 20-30 baits in highly dense bear area harvests (on average) two giant black bears per year having six bowhunters sitting at six different bait sites each evening for a week.  The schedule repeats for five weeks during May and June.  A spring bear season accumulates to 720 hours hunted, averaging 360 hours to kill a giant bear.  Your average resident bear hunter runs two baits sites with a partner and hunts ten evenings per year, which totals to 80 hours of hunting per season, every four years they should see a giant bear – patience.

Often during May, juvenile bear and sow/cub activity increases on the bait sites.  This makes it challenging to keep the bait stocked up with food.  However, it seems during late May and early June, big boars are not really interested in eating as much but rather breeding.  The bait sites I like to hunt during the rut have the most sows.  Sows act like bait on bait for dominant breeding boars.  We provide the food to hold the sows at the bait in hopes that giant boars are roaming the country side searching for sows in heat. Big mature boars are smart, wary creatures that seldom drop their guard, but they can become less cautious during the rut travelling many kilometers between baits seeking hot sows.  It is really just a matter of time (and luck) before a shooter bear arrives if your bait has a sow in heat.  Besides waiting for specific bears (that you photographed) to appear at the bait, never ever seen before giant bears materialize.

#3. Be Ready on Incoming Bears

In this video, a Pope & Young calibre bear enters the bait site and then becomes suspicious of the bowhunter in the treestand and smells for signs of danger.

Clear as many shooting lanes as possible, right down to removing the smallest twigs.  On established bait sites there will be many well used trails bears have been using to enter and exit the bait.  Setup for shots on those trails as well, paying close attention to the wind. Try to find a balance between cover and ensuring you can see approaching bears. Trophy boars may not commit to the barrel immediately and will still be very cautious. On shooter bears, take the first ethical shot presented. You may only have a fleeting moment before they realize they are in danger and back out, never to be seen again in daylight.  It can be difficult to field judge bears as they approach the bait, but it needs to be done so you are ready when they arrive.  The great thing about bear senses is that smaller bears know well before you if a giant bear is in the vicinity.  I have often seen bears quite comfortable feeding for hours when all of sudden they stand and stare into the bush before dashing off.  Usually within an hour a large boar appears at the bait after that.

After bears enter the bait and begin feeding then put themselves in awkard position that are challenging for bowhunters to capitalize on.  Take the first ethical shot that’s presented.

To Shoot or Not to Shoot

Giant bears are just that – gigantic.  This past spring I was field judging a mature boar behind me when I turned around to see a massive black creature almost at the bait.  With these giant bears, there is no need to field judge, anyone with bear sighting experience will know instantly the calibre of bear approaching, especially with their “king of the hill” slow swaying attitude and domineer.  However, for those with no experience here are some tips:

A mature black bear’s back will reach the hieght of a 45 gallon barrell, as shown here from a browning trail camera picture.

Worn stained teeth are good evidence of a old black bear, but unfortunately you cannot really inspect these before the shot.

Hunting during the rut is very random and requires many hours of sitting still waiting patiently.  Stop by Cabela’s to stock up on everything you will need to sit comfortably all day/week long – treestands and seats have increased significantly in comfort recently.  Increase your odds by hunting baits with sows and pictures of giant bears that know exist, and sit tight until you get your chance.