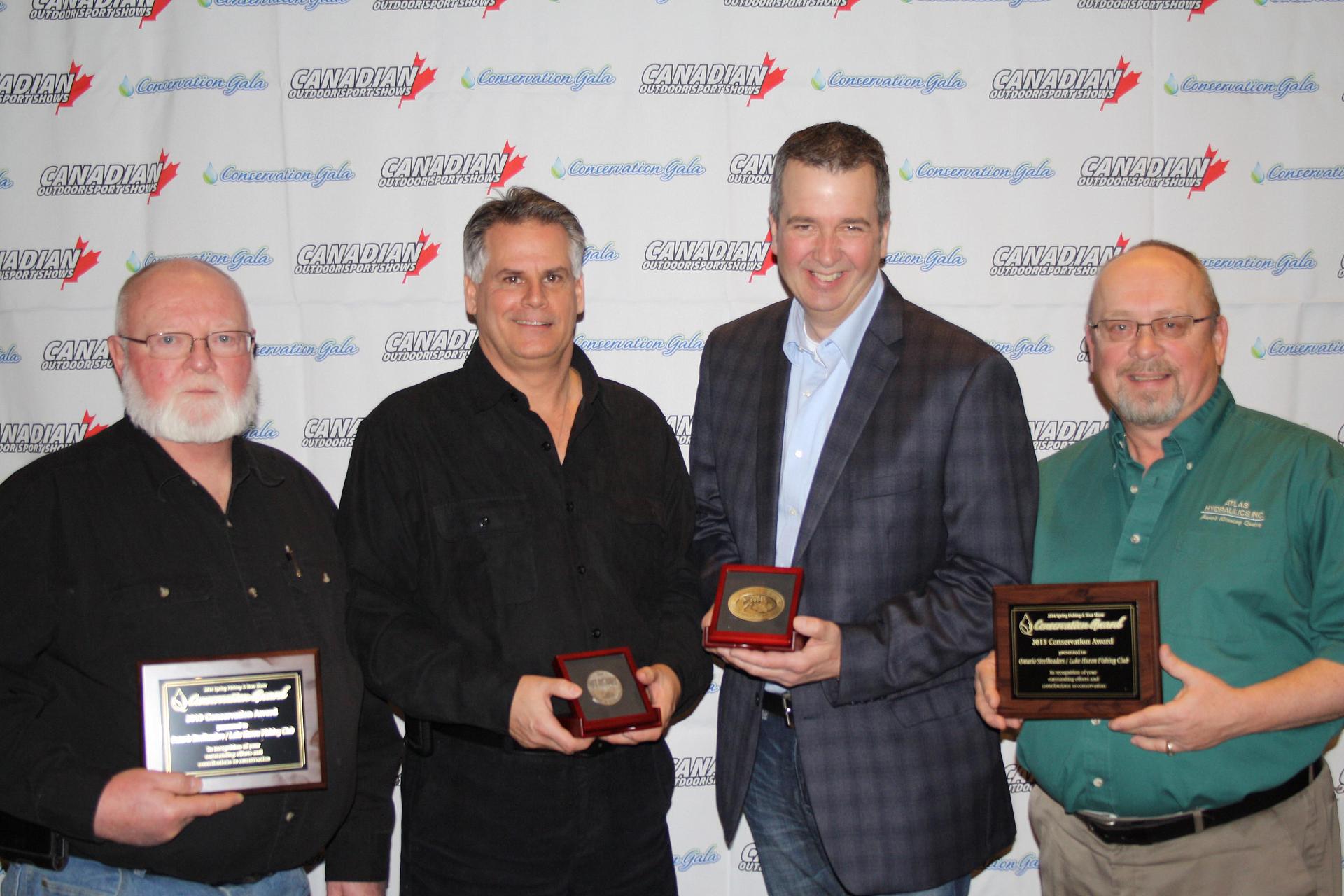 The event took place on Valentine’s Day during an industry breakfast a few hours before the official start of the show.

“Always a keen learner, never shy, always ready to do his part, this year’s inductee is one of Canada’s leading communicators in all things fishing,” said award presenter, and last year’s Amsbury Award winner, Phil Morlock, before calling Campeau to the stage.

Reading a note from Hall of Fame alumni Tom Brooke, who nominated Campeau, Morlock added, “His easy-going style and understandable approach has introduced and encouraged many thousands of people to get into recreational fishing and to stay with it. Although he is from Quebec, his reputation and influence is felt across the country.”

On accepting the award, Campeau was characteristically humble, appreciative and humorous. Between jabs at the “skinny, Japanese guy,” aka Bob Izumi, who inspired him to be a professional angler, Campeau spoke about his love for fishing and hunting and how proud he was that his accomplishments were being recognized. “To be honest, I never thought I’d be inducted into the Canadian Angler Hall of Fame,” he said. “First there is the language barrier to make it difficult for some people to understand French in text and language. Second, by being from the other side of the border, it’s sometimes difficult to be aware of my work.”

Campeau writes for at least 13 newspapers and magazines, including Outdoor Canada, and can be heard on 60 different radio stations. He’s also the author of four books. And, Morlock noted in his introduction, “he is more than a communicator, he’s also a very accomplished angler.”

Morlock was also on stage to present the Rick Amsbury Award of Excellence to Bruce Tufts. “A lot of the work that this gentleman has done has helped improve catch and release fishing, both in tournaments and in day-to-day fishing,” Morlock said. “Bruce’s research led to the development of the in-water weigh-in system used in tournaments.”

In a short, but heartfelt, acceptance speech, Tufts said that his first exposure to the fishing community was working with Shimano to try and improve the way fish were handled during tournaments. But, he said, his experience was much more enriching. “I came into this as a scientist, to do science and to make things a little better, and what I came out with, is a whole bunch of friends.”

Finally, former Going Fishing TV show host and Angler Hall of Fame alumni Darryl Choronzey presented the Conservation Award to Karl Redin, president of the Ontario Steelheaders and Brian Garnet of the Lake Huron Fishing Club, for the work both groups have done to improve steelhead stocking and habitat on the Saugeen River.

Typically outspoken, Choronzey was ebullient in his praise of the program. “When we started 10 years ago, I estimated the run was probably 3,000 fish. We estimate our run to be 45,000 to 50,000 fish right now. I know my waters and this is the best steelhead fishery in North America.” Choronzey credited the success to the hard work of the volunteers he called the “Old Boys,” some of who also joined Redin and Garnet on stage, and challenged younger members in the audience to match their dedication to preserving Canada’s fisheries.

The Spring Fishing and Boat Show continues at the International Centre until Family Day, Feburary 17.