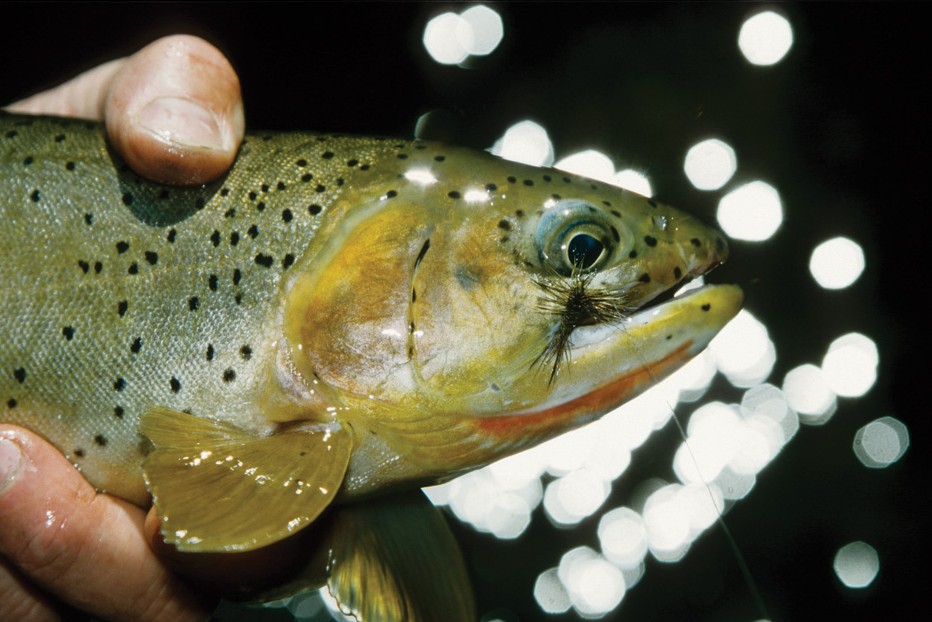 Where to go and what to use to catch courtly cutties

The westslope cutthroat trout is to angling what Gone With the Wind is to cinema-a true classic. That’s partly due to its lineage as a species native to western North America, unlike its introduced rainbow, brown and brook trout cousins. It also has a lot to do with the fact its black-spotted tail, sleek lines and pumpkin-orange throat slash make it the most handsome trout you’ll find anywhere. And the fact it’s now gone from many of its historic waters makes it all the more precious.

Perhaps most strikingly, the westslope cutthroat’s reputation as a classic comes from the rugged, spectacular, remote places it calls home: clear, high-mountain lakes surrounded by snow all four seasons, and rollicking, freeflowing headwater streams and rivers with mysterious, deep pools stitched together by stretches of low, fast water. Combine all these factors and it’s no wonder many anglers make it a mission to chase the westslope cutthroat.

Where, when, and how

You can fish for cutthroat from spring through fall, although I prefer late summer and early fall. More important than the season, though, is what to use and where to look.

In streams and rivers, target deeper pools and long boulder gardens in two to four feet of water, focusing on the seams dividing calm and choppier water. Cutthroat wait patiently in these areas for insects or other food to come floating downstream-the piscatorial equivalent of a drive-through restaurant. Successful anglers wade cautiously so as not to spook their quarry. In fact, it’s often better to stay on shore and maintain a low profile while casting to promising-looking water.

In flowing waters, you can use either fly or spinning gear. Just cast upstream and let your offering drift down, keeping the line tight and the rod tip at mid-height so you can set the hook when a fish takes. If you’re using a small spoon or spinner, start a slow retrieve as soon as it hits the water, and speed up as it gets closer to you. When cutthroat are voraciously feeding on surface insects and ignoring everything else, spin fishers should tie on a casting bubble and fly, and cast upstream. Watch the fly, not the bobber, and be ready to strike the instant a fish hits.

When fishing in high-mountain lakes and beaver ponds, pay particular attention to the edges of drop-offs, as well as shallower areas with sunken logs, boulders and other natural cover. As with flowing waters, the name of the game is stealth. Avoid splashing and making noise when wading, and move cautiously on shore. In many still-water hot spots, a stealthy angler can sight-fish for cruising trout and cast well ahead of them. The biggest challenge here, especially when using dry flies, is to not pull your fly away as you excitedly watch a big trout rise for it.

As a general rule, westslope cutthroat are most active in the late morning and afternoon, and into the early evening. And unlike browns and rainbows, cutthroat commonly quit feeding well before sundown.

Most cutthroat aficionados swear by bright sunny days; if cooler, rainy weather sets in, tie on a weighted nymph or heavy hardware and go deep. If blue-winged olives start hatching, however, it could provoke furious topwater action-and transport flyfishers into angling nirvana.

Canadian range: In Alberta, the upper Bow and Oldman drainages of the South Saskatchewan River basin; in B.C., the headwaters of the Fraser River, Flathead River and Kootenay drainage

Try tiny gold or silver spoons from EGB, Williams or Len Thompson, or small gold, silver or Panther Martin or Mepps. The best Royal Wulffs, Elkhair Caddis, Parachute Adams 16 to 20, rubber-legged Stimulators and Turk’s in sizes 10 to 12. For nymphs, try Princes, Hare’s Pheasant Tails and Copper Johns in sizes 14 to 18.