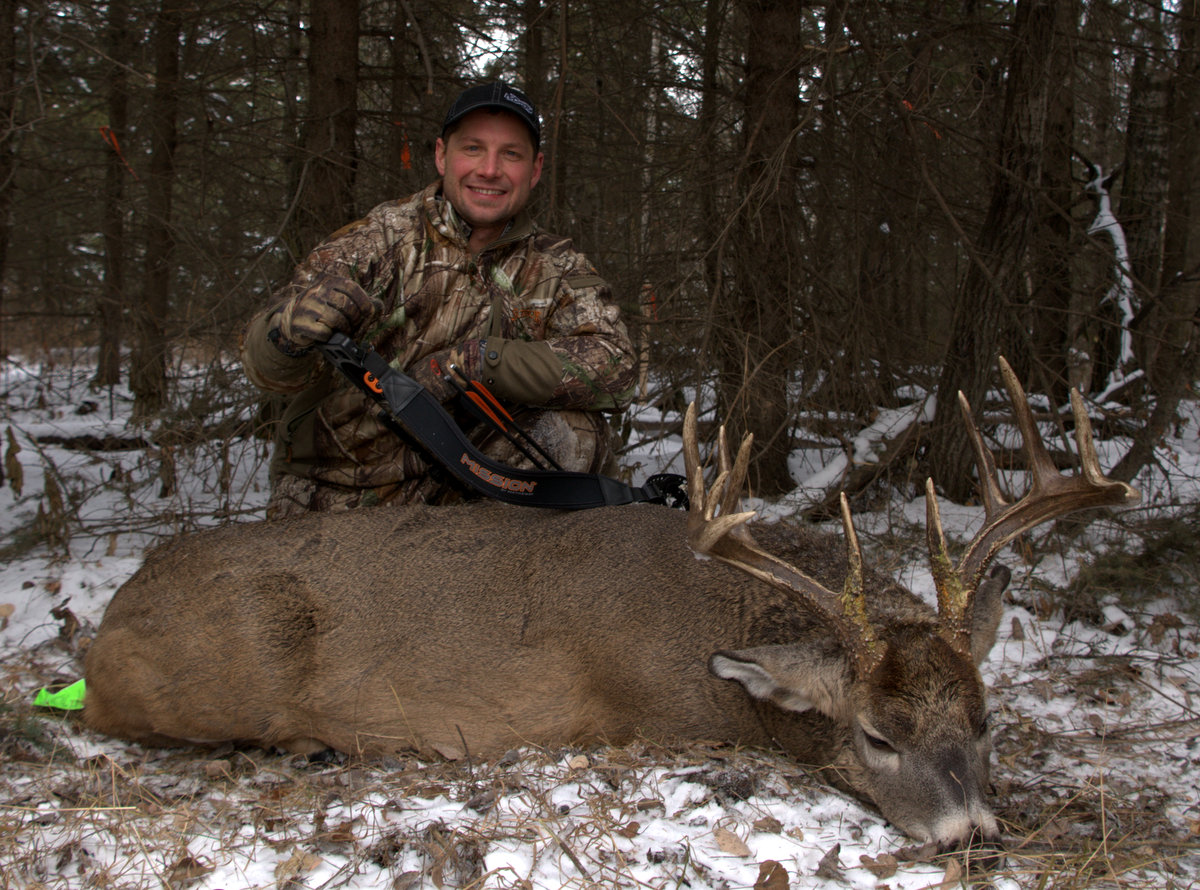 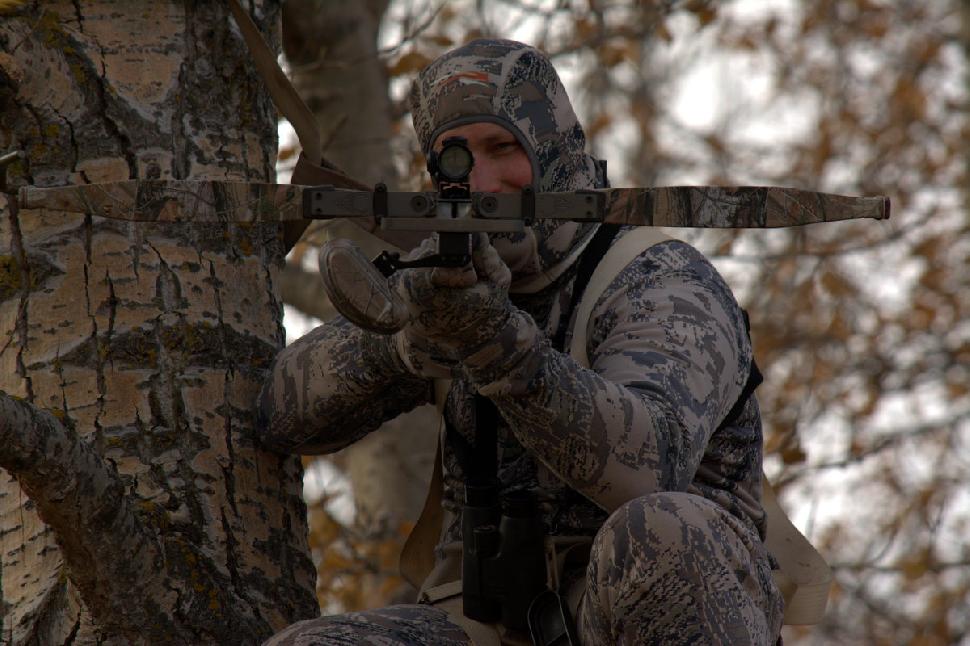 The wind is a hunter’s best friend and worst enemy, potentially all in the same minute. Wind direction and velocity can change quickly and it just takes one gust from the wrong direction to foil a plan that had been working perfectly. For many close-range hunters, an ambush from a tree stand perch over a popular game trail is the preferred method of choice, offering the crucial advantage of avoiding detection. I’ve heard others ask in casual conversation, “You just hang a tree stand and wait – how hard can that be?” Over the years, I’ve seen many trees that look great for a tree stand but will never produce a shooting opportunity. It takes a little practice and tweaking to get things just right to have animals “walk right in.”

Most hunters wish they had more time to scout and find prime areas for hunting, but the realities of life prevent this. However, when close-range hunting with a crossbow, scouting is even more critical to success. Having a general area is the first step, but putting in the time to learn the intricate details, such as the preferred travel routes, bedding areas and food/water sources, will help you decide where to set up for a close-range shot. The right set up can be tough to choose, because animals just aren’t that predictable night after night, day after day or year after year. For example, there are usually numerous trails entering a food source, spaced more than 100 metres apart. You won’t be able to cover them all. This is why it’s important to know your area inside and out, including multiple ways to and from your set up. You don’t want to spook game if they’re out of range and you run out of shooting light. Additionally, you need to be able to enter your area quietly before shooting light to set up in time for peak activity at dawn. 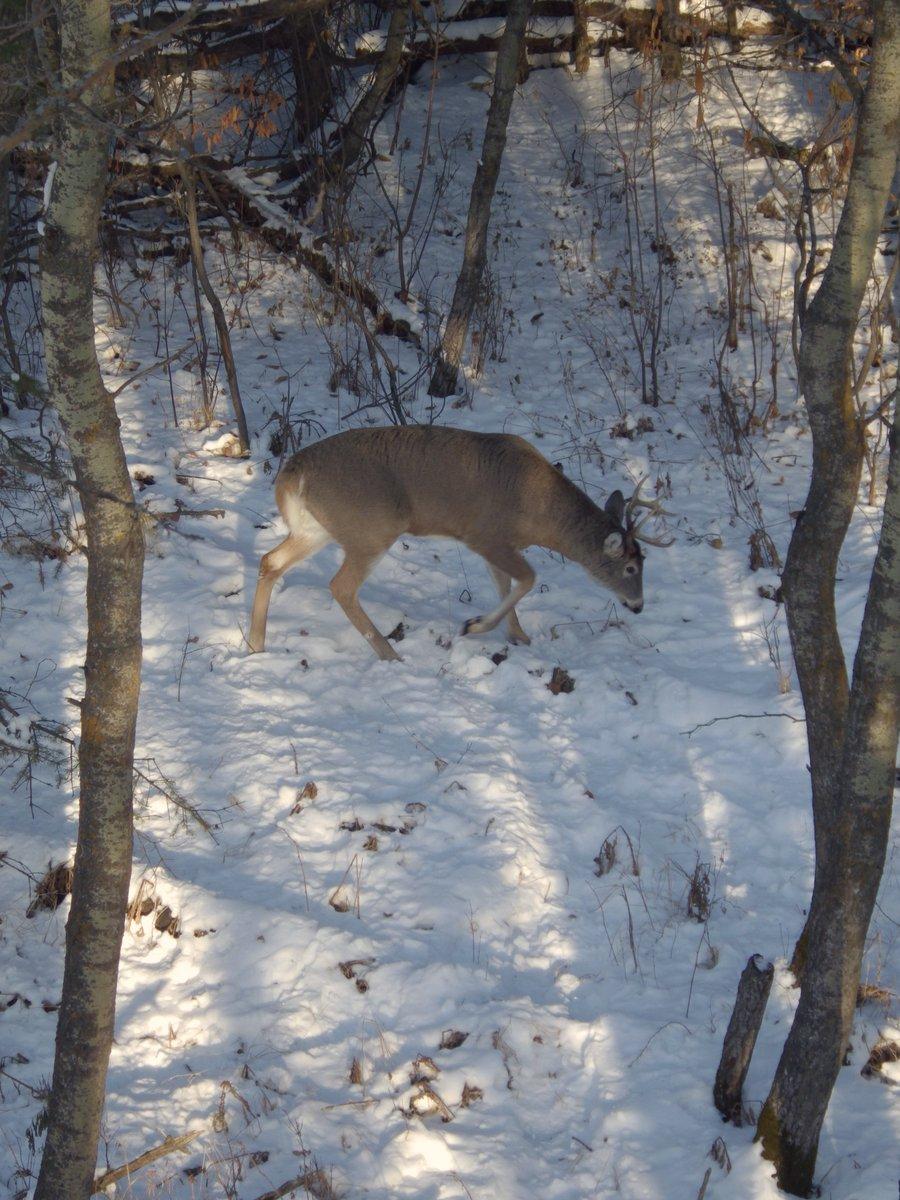 I can’t emphasize enough that setting up for a kill with an arrow takes some practice and different thought. Good set ups are without a doubt the most critical aspect of close-range hunting success. With long-range weapons, the hunter picks a vantage point where he or she can see over hundreds of metres in multiple directions, thus giving him or her the best chance for a shot. An animal may (and often does) come to the edge of cover but no further; therefore, you are asking it to ignore its survival instincts by exposing itself to dangers. The animal may cross into the insecure area but, more often than not, it will remain at the edge of cover and leave you with no shot. Try to make it easy for the animal and set up in places where the safe path of least resistance intersects with your shooting lanes, within your effective killing range.

When selecting a spot to set up a tree stand, try to avoid the edges of openings, as these are really only good for rifle hunters. It’s much better to set up ambushes on trails leading to the openings. Go ahead of time to scout the confluence of trails (if any) and you’ll be able to select a spot to set up an ambush from and, with a little clearing of bush, you’ll have a variety of shooting lanes that’ll cover most scenarios. 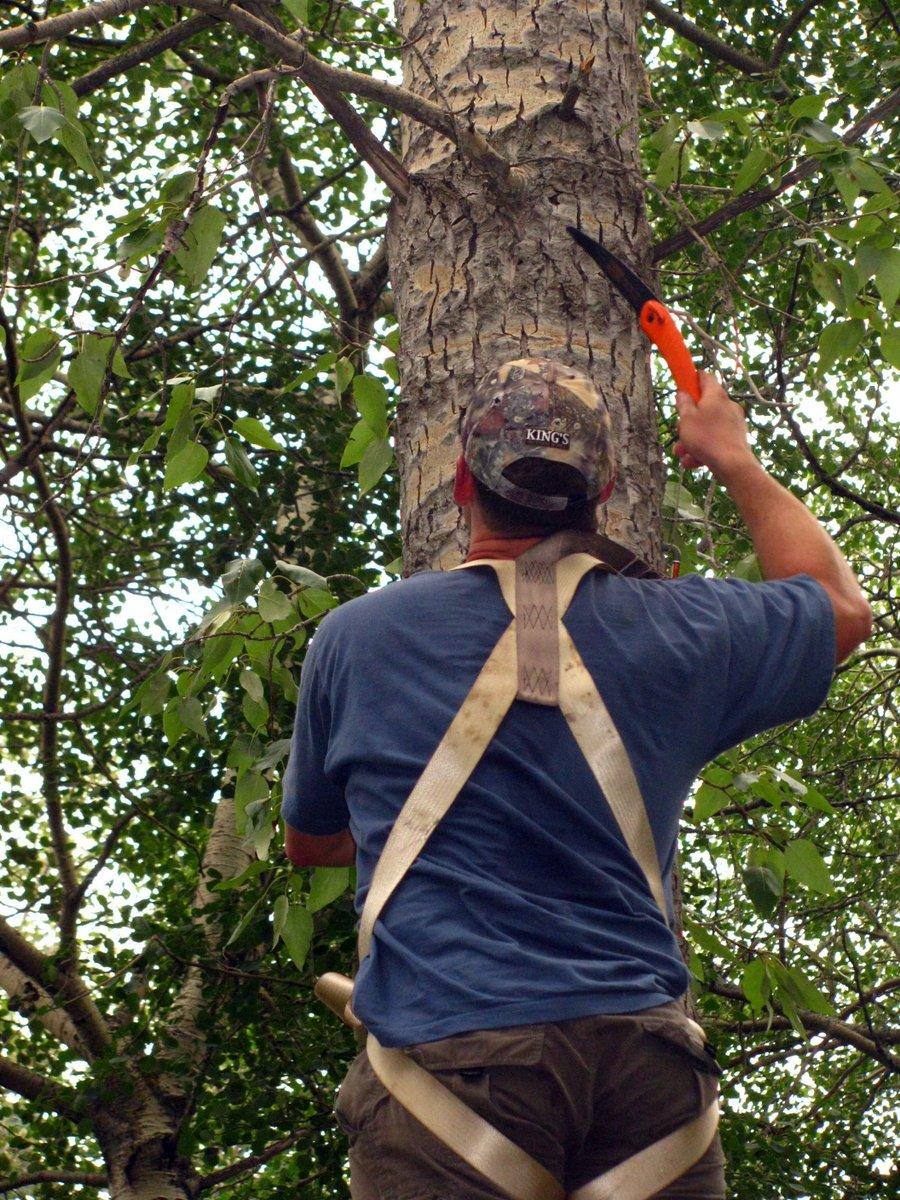 Once you decide on the area you want to set up in, the toughest part about setting up a tree stand is picking the tree. The forest has an abundant selection, but many trees will never produce a shooting opportunity. For high percentage chances, choose a tree with the following properties: 20 metres off game trails, healthy and large enough to support you, provides cover from late summer to early winter landscapes and offers clear shots (or with minimal work cut interference). I prefer conifer trees. Many times a tree doesn’t exist with everything you want, so you might have to keep looking or compromise.

Bullets fly fast and straight and, for the most part, plough through small sparse twigs, leaves and shrubs. Arrows, on the other hand, deflect off course with the slightest interference, such as branches, crops or thick blades of grass. Give yourself extra time when setting up to clear any debris from your shooting lanes. I always carry small, quiet pruning clippers and a folding saw to clear my lanes. Once cleared, pre-range shooting distances so you know which sight pin to use when the animal arrives. Because knowing the distance is crucial to making the shot count with an arrow, pick shooting lanes with easy-to-remember reference objects for distance markers, like trees, rocks or bright-coloured flora. Taking the time to set up correctly beforehand, a quality ambushing opportunity as the animal approaches is usually the result. 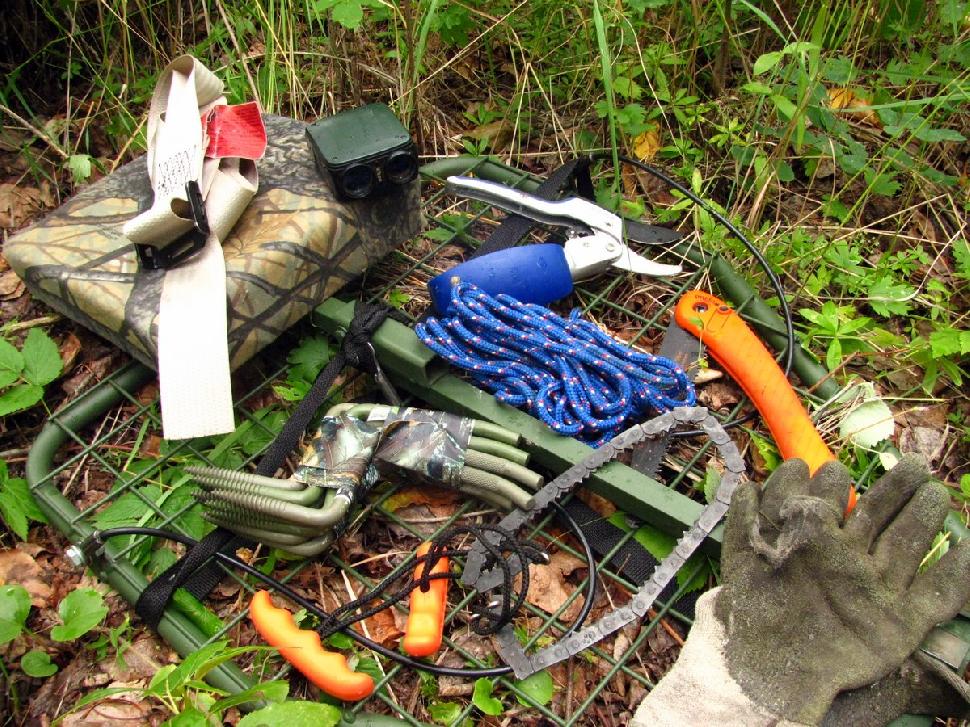 Tree stand hunting isn’t for everyone, but everyone who does should wear a three or five-point safety fall harness. Another important safety aspect is to use a lanyard line to haul up your un-energized crossbow. Don’t ever cock your crossbow until you’ve secured your safety. Those three safety rules must always be followed. 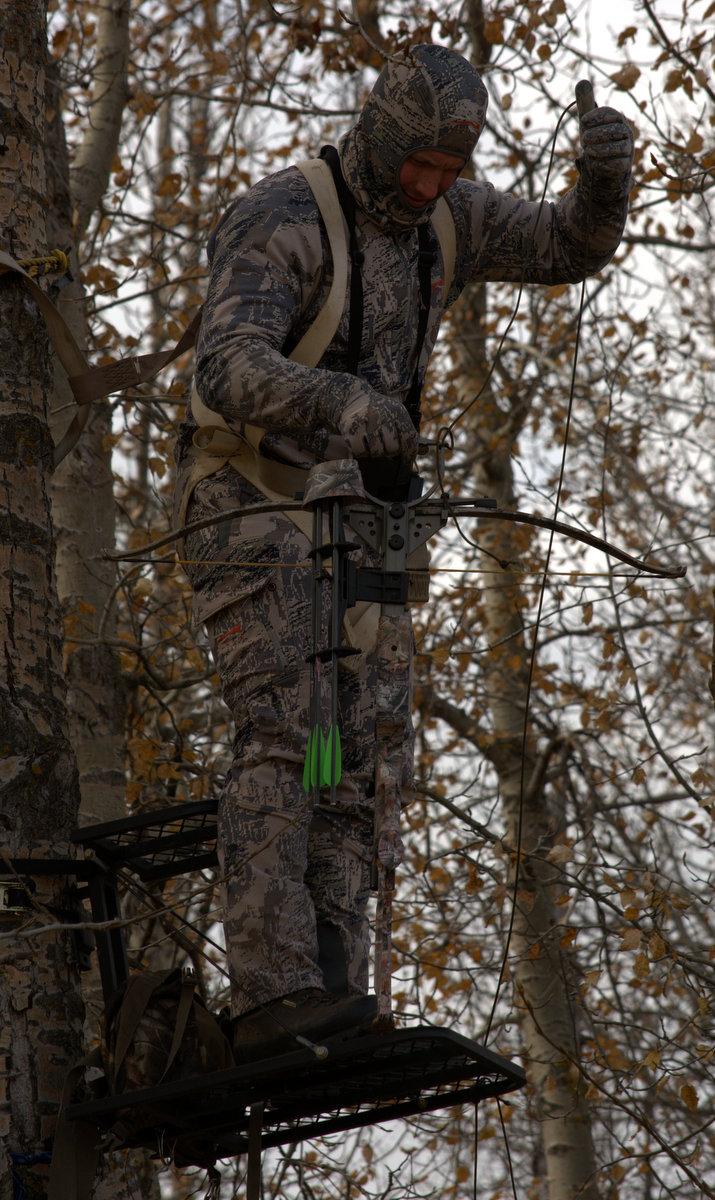 To make things more comfortable while you are sitting for long periods of time, layered clothing is must. Crossbows stocks and limbs are usually fabricated from metal these days, so even with the heavy thick pair of mitts heat will be extracted from your extremities by holding onto the crossbow. Where possible, I always leave a branch to hang my crossbow on so I don’t have to hold it for hours. In the case where a branch isn’t available, I’ll bring a bow hanger. It just makes sitting for long periods of time possible. 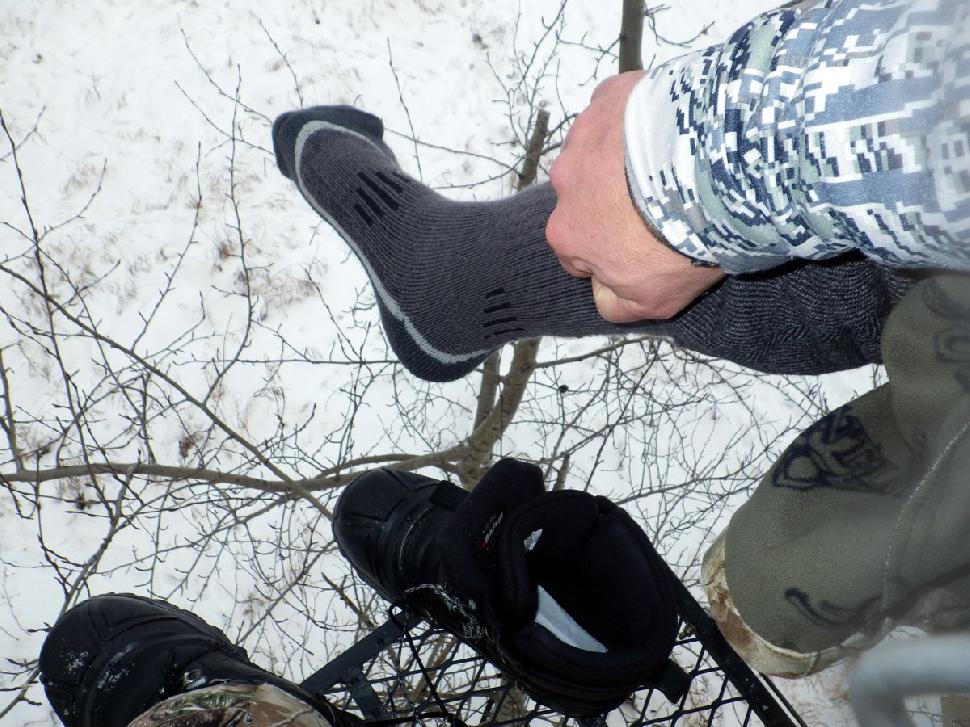 This past November I hunted from my favourite 18-metre-high tree stand, hung in a conifer tree and nestled along a convergence of deer trails. Because of years of experience with this location, I was confident it was just a matter of time (and some luck) for a shooter buck to enter my shooting lanes. Even though I’ve hunted this area for seven previous years, I cleared another shooting lane this fall to prevent deer from eluding me, based on past experiences. It was a cool morning, but after about an hour I caught a glimpse of a buck running across a field, into the patch of bush I was set up in. But not close enough.

“In range” is always a challenge when hunting with an arrow. It’s usually just “out of range” that I’m most familiar with when it comes to big bucks, as was the case with this buck so far. Close enough to know he was a shooter and feel your heart beat in your throat, but far enough away and still within some cover to remain safe. I didn’t think he would come my way without any convincing and I was right, as he continued away from me in search of a receptive doe. As soon as he was out of my sight, I aggressively smashed the tines of my rattling antlers. Instantly, he rushed back into sight and was running directly towards me. Without any hesitation, he came right into 60 metres but stayed downwind and in cover. He eventually took a wide berth around me because he couldn’t see any other deer fighting, but he never smelled me.

Eventually he came into sight again at 20 metres on my other side, intently following a deer trail a doe had walked an hour earlier. At 15 metres quartering away, I stopped him with a light grunt. I aimed low and at the last rib. I touched the trigger on my Mission MBX400. Arrow away! It hit him right where I wanted to and he took off west. I heard him stumble and crash a few seconds later. Big buck down from a tree stand.