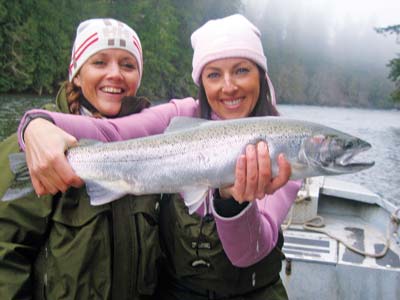 Why We Chose It: Steelhead; World-famous run of large fish in a remote setting

When to Fish: July through September.

Where to Fish: The lower 20 kilometres of the river to the tidewater.

Tip: Use floating or skating surface fly patterns, or wet flies such as the General Practitioner or Black Woolly Worm.

Why We Chose It: Cuttbow trout; To experience this unique and aggressive cutthroat-rainbow hybrid

When to Fish: July through September.

Where to Fish: Any section of the upper Dean near the town of Anahim Lake.

Tip: Use dry flies or nymphs on 4-weight gear.

—Mark Pendlington, host of Sportfishing BC