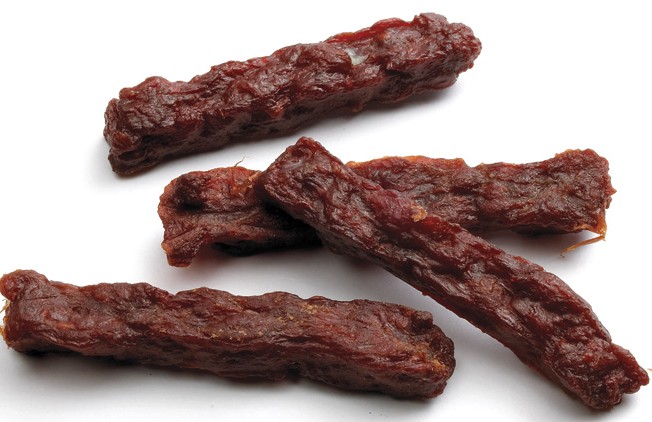 On a cold autumn day out deer hunting, there’s nothing better to keep your motor running than an occasional bite of high-energy food. And while peanuts, chocolate and other snack foods can do the job, there’s a certain poetic justice to fuelling yourself with jerky made from the previous year’s harvest.

Venison jerky is a lightweight and nourishing pocket snack, but it can be tricky to make. If you get the ingredients wrong, you’ll ruin a nice haunch of meat—and give yourself heartburn. Get it right, though, and it’s downright addictive. A couple of years ago, I was hunting deer with a gal named Leney Richardson, who brought along the best homemade venison jerky I’ve ever tasted. She says she experimented with several methods before finding a recipe that didn’t overwhelm the good, natural flavour of the meat. “Now the biggest challenge is preventing my husband, Jim, and the rest of the guys from gobbling it down as soon as it’s finished,” she says.

Some jerky recipes recommend soaking the meat in brine, but after a few disastrous experiments with that process, Richardson now prefers premixed formulas such as Wild West Seasoning. “They include the curing ingredients, and the results are much more consistent.”

As a happy customer, I can recommend Richardson’s venison jerky as the perfect, delicious, high-energy snack for deer hunting. The only problem is trying to remain still when you’re on your stand—one hand will undoubtedly always be crawling toward your coat pocket for more.

Here’s how to make it.

If you’d rather make your own jerky seasoning than go the store-bought route, here’s a recipe that works well, even with toughter cuts such as shanks and shoulders. —Angelo Paino

Mix together salt, paprika, sugar and pepper; sprinkle some of the mixture all over venison strips. Pound strips flat with a tenderizing mallet; sprinkle with remaining seasoning. Place on a wire rack in a 175°F oven until strips are dry but still pliable (about 8 hours). For a different taste, first marinate the strips overnight in teriyaki sauce (use a glass bowl). Drain and dry strips, then proceed as above.