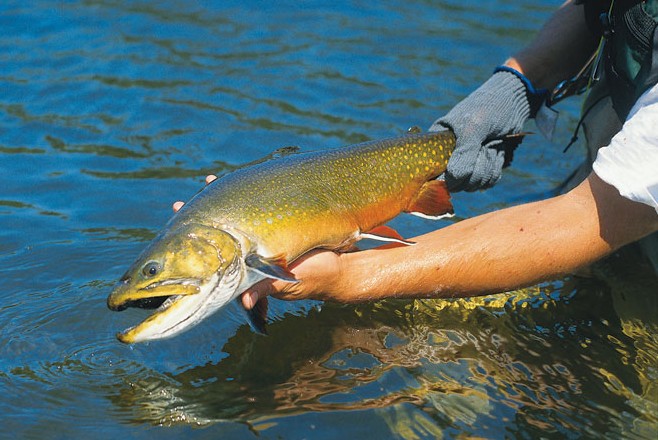 Opening-up brookie-fishing secrets from the pros

Jim Stelfox remembers an outing many years ago that epitomized the frustration of fishing for opening-day brookies. The Alberta government fisheries biologist had accompanied a group of proficient anglers from a Calgary fly-fishing club to a favourite hot spot in Kananaskis Country. All day, nobody even saw a fish in the shallow, spring-fed beaver pond, much less caught one. Winterkill, the dejected club members muttered. Smiling knowingly, Stelfox knew better.

Three weeks later, he returned with another group and they caught brook trout until their arms ached. “It was like the fish had materialized out of thin air,” Stelfox recalls.

Why the dramatic change? The water temperature had risen several degrees, stimulating insects into activity and the trout to emerge from winter lairs under thick mats of vegetation lining the pond bottom.

Such is the reality of early-season brookie fishing: if you know they’re there, but you just can’t catch them, come back when the water’s warmer.

In Alberta, where non-native brook trout have overpopulated many Eastern Slopes streams—negatively impacting natives such as cutthroats and bull trout—brookies are popular with anglers. With zero or very low catch limits for native species, some western anglers welcome a chance to harvest a few brookies (anglers in Ontario and Quebec, on the other hand, have traditionally enjoyed eating at least some of their native brook trout).

No matter where in Canada you fish for them, brookies are thrilling to catch. Voracious feeders, they munch on everything from worms, leeches and aquatic insects to small fish, including young trout. They can be caught on bait—especially worms—where legal, and on small Mepps, Panther Martin and Blue Fox spinners, or Little Cleos, Williams Wablers and tiny E.G.B. spoons.

Although dry flies such as Royal Wulff and Adams will work later, early-season fly fanatics should stick to streamers such as Woolly Buggers, White Marabou and Green Ghost. Effective nymphs include the Prince, Gold-Ribbed Hare’s Ear and Pheasant Tail. Presentation is everything when it comes to brookies. The more delicate the delivery, the more success you’ll have.

In lakes, focus closely on shorelines—especially around underwater brush and other snags—just inside drop-off ledges, at rivermouths and in shallow bays. In flowing water, brookies like to lurk tight to the bank, beneath hanging willows and submerged logs.

And remember: if it seems they aren’t there, don’t give up. Chances are, they soon will be.

Well-rounded trout anglers should be conversant in the biology of their favourite fish, and a good start comes in knowing that some trout are actually classified as char. Falling into that fish family, in fact, are two of Canada’s most favourite “trout” species—lakers and brookies—along with bull trout. Many a wager has been won—and lost—on the basis of this interesting little fishy fact.