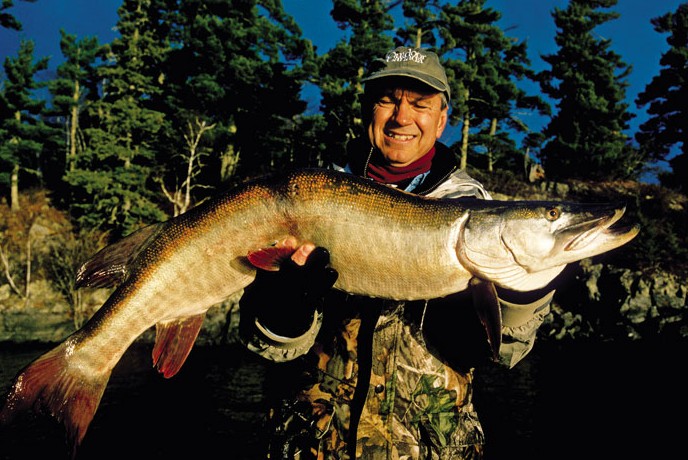 This season is best for finding trophy muskies. Here's how

There’s no better time to catch muskies than fall, especially if you’re not familiar with the lake, river or reservoir you’re fishing. That’s because the big toothy critters abandon their usual haunts in the fall and roam around searching for prey, greatly improving your chances of running into one.

The key here is understanding muskie behaviour. Despite their impressive dental work and fierce reputations, these giants are mama’s boys. They don’t like leaving home. They spawn, take summer vacations and head south for the winter in very specific locations. And they remain devoted to these different seasonal ranges year after year after year.

That’s one of the reasons why local muskie guides often prefer fishing in the summertime—they know exactly where the fish are. And that’s why the rest of us loathe the summer months. Unless you know the idiosyncratic habits and habitats of specific fish, hunting muskies can be like searching for the proverbial needle in a haystack. Indeed, an individual muskie’s summer range can be as small as 40 hectares.

Autumn, however, levels the playing field in an amazing way. When the water temperature drops below 15°C, the fish become nomadic and drift from structure to structure across a large area, searching for food. In a relatively small lake, they’ll often cruise an entire section several times. For example, researchers once followed a single fish as it completed four circuits around half a lake—in just one month.

The reason these mammoth couch potatoes suddenly become gypsies is intriguing. Like hibernating bears, they go into a torpor during the winter and feed infrequently, if at all. Instead, they survive by binge feeding in the fall and living off the reserves of fat during the winter. Mature muskies must also obtain enough nourishment in the autumn for the eggs or milt developing inside their bodies; there simply isn’t enough time in the spring for these early-season spawners to fatten up.

Trolling is a much better strategy than casting when it comes to fall muskies, if for no other reason than two moving objects have a much greater chance of eventually meeting. In shallow, weedy lakes, expect heart-stopping explosions by trolling large in-line spinners over and along deep cabbage weed edges. Good choices include the Mepps Magnum Musky Killer, Mepps Marabou and Blue Fox Fluted Blade Musky Buck. Spinnerbaits such as the Dick Pearson Grinder and Rad Dog Grinder also work well.

Regardless of the lure you choose, the key at this time of the year is to concentrate your efforts in 15 to 30 feet of water. And while almost any shoreline can produce fish, you’ll increase your chances significantly by trolling in, over and around long underwater points, sunken rock reefs and necked-down channels with current. These locations attract autumn-spawning species of fish, such as ciscoes and whitefish, as well as walleye, white suckers, sauger and perch—all fine fall snacks for hungry muskies.

So get in on the feeding frenzy, because there’s no better time than right now for landing that muskie-of-a-lifetime.

How to release properly

Trophy muskies are almost always female spawners approaching 30 years of age, so releasing them unharmed is paramount. Hold up a big fish improperly, let it flop on the floor while you grab a camera or, worse yet, gaff it, and you significantly reduce its chances of survival after release. Ideally, you should keep the fish in the water over the side of the boat in an extra-large net while you remove the hooks (the Beckman Magnum Musky, Pro Musky or Husky Musky, and the Frabill Big Kahuna are good net choices). If you must lift a big muskie into the boat, gently cradle its belly—then get it back into the water as soon as possible.