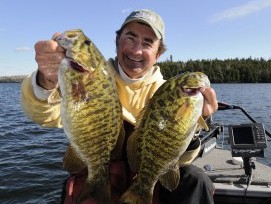 The smallmouth fishing has been nothing short of amazing the last couple of weeks as the long stretch of beautiful, above normal, autumn weather has persisted. Yesterday, my son-in-law and I enjoyed catching one big smallmouth after the other working a fall pattern that not too many people know about and even fewer put into practise.

For the life of me I don’t know why the smallmouth do it, but every fall at this time, when the weather turns gorgeous, you can find the fish in the same areas where they spawned and where you caught them back in the spring.  I am not saying that every bass in the lake is up shallow, because the much deeper, open water structure fish cooperated for us as well.  But the shallow bass are just so much more fun to catch, because they are so accessible and so aggressive.  I mean how would you rather catch a 4 or 5 pound smallmouth?  Dragging a tube jig along the bottom in 28 feet of water or ripping a jerkbait just under the surface and having the fish explode on your lure and come dancing five feet or more out of the water?

The best baits yesterday were the Rapala Minnow Rap and a new jerkbait that Rapala will be introducing next year called the  Rapala Clackin’ Minnow.  Tom McMurray, from Rapala Canada, showed me the Clackin’ Minnow when I was down at the ICAST Show in Las Vegas in July and as soon as I saw it I knew it was a winner.  That is because the new Clackin’ Minnow has the body of my favourite jerkbait, the X-Rap, but also the same unique sound chamber as the Rapala Clackin’ Rap lipless crankbait, which just so happens to be my favourite noise maker for walleyes under the ice in winter.  (More about that at a later date!)

Yesterday, I was casting the 3 1/2-inch Clackin’ Minnow (it is also going to be available in a 4 3/8-inch size), letting it sink a little and then walking-the-dog with it back to the boat, just like you’d retreieve a top water surface lure.  I was getting it down about 4-feet deep and letting it pause for two or three seconds between jerks.  The smallies were ripping the rod out my hand.  And almost every fish had two or three followers coming in with it.  The lures were so exciting the fish, that whenever one of us had on a bass, the other would drop a bait beside the boat and we’d double up 8 out of ten times.  Two trophy fish at once.   I am also sure that had we paused long enough after one fish hit, that we could have doubled up and caught two smallmouth – one on each treble of the same lure.  The fishing was that explosive.

And as I mentioned earlier, the smallmouth were swarming around the same areas where we had found them in the spring.  I’ve discussed this pattern in the past with good friend and bass researcher Dr. Mark Ridgway.  Neither Mark nor I can figure why the smallmouth return to these “spring spawning areas” in the fall, but return they do.  It is almost like a “false spawning run “, although I am sure the fall movement has nothing to do with nesting.  Who knows, maybe the bass are sleuthing out the areas for next spring.

What is also curious is that I was talking about the pattern this morning on my Fish Talk With The Doc segment on the Outdoor Journal Radio Show broadcast live on the FAN 590 in Toronto and carried across the country on Bell ExpressVue.  (By the way, you can listen to the show live on the internet http://www.fan590.com/listen/ each Saturday morning between 7:00 and 9:00 AM EST.  I always hook up with Angelo, Pete Bowman and Mike Miller for the last fifteen minutes of the show.  You can also catch it ”after the fact” by visiting www.fishncanada.com/content/view/135/54/ )

Anyway, this morning, Angelo Viola was saying that he fished the Berkley B1 tournament down on Lake St. Francis a couple of weeks ago and a friend of his, hot stick and top bass pro Larry Allard, was telling him after the event that he was fishing a similar pattern.

The key is not just fishing shallow water.  You have to know where the smallies spawn in the spring and then go to those areas and check them out.  And forget about employing ”tippy-toe”, finese presentations.  Instead, throw jerkbaits (I bet spinnerbaits would work also) and you’ll impress the heck out of yourself.

In fact, the other day, I was bringing in a real nice smallie that I reckoned weighed around four pounds.  Since we were just fishing for fun, I put a lot of pressure on the the fish to force her to the surface to jump.  But when she came up and wallowed and I saw how big she really was – close to six pounds – I just about died.  Of course, I went into full tournament mode, plunging my rod tip deep into the water to keep her under, but it was too late and I wound up losing her. Still, we got to she her and that was the best part of an otherwise fantastic day of smallmouth bass fishing.