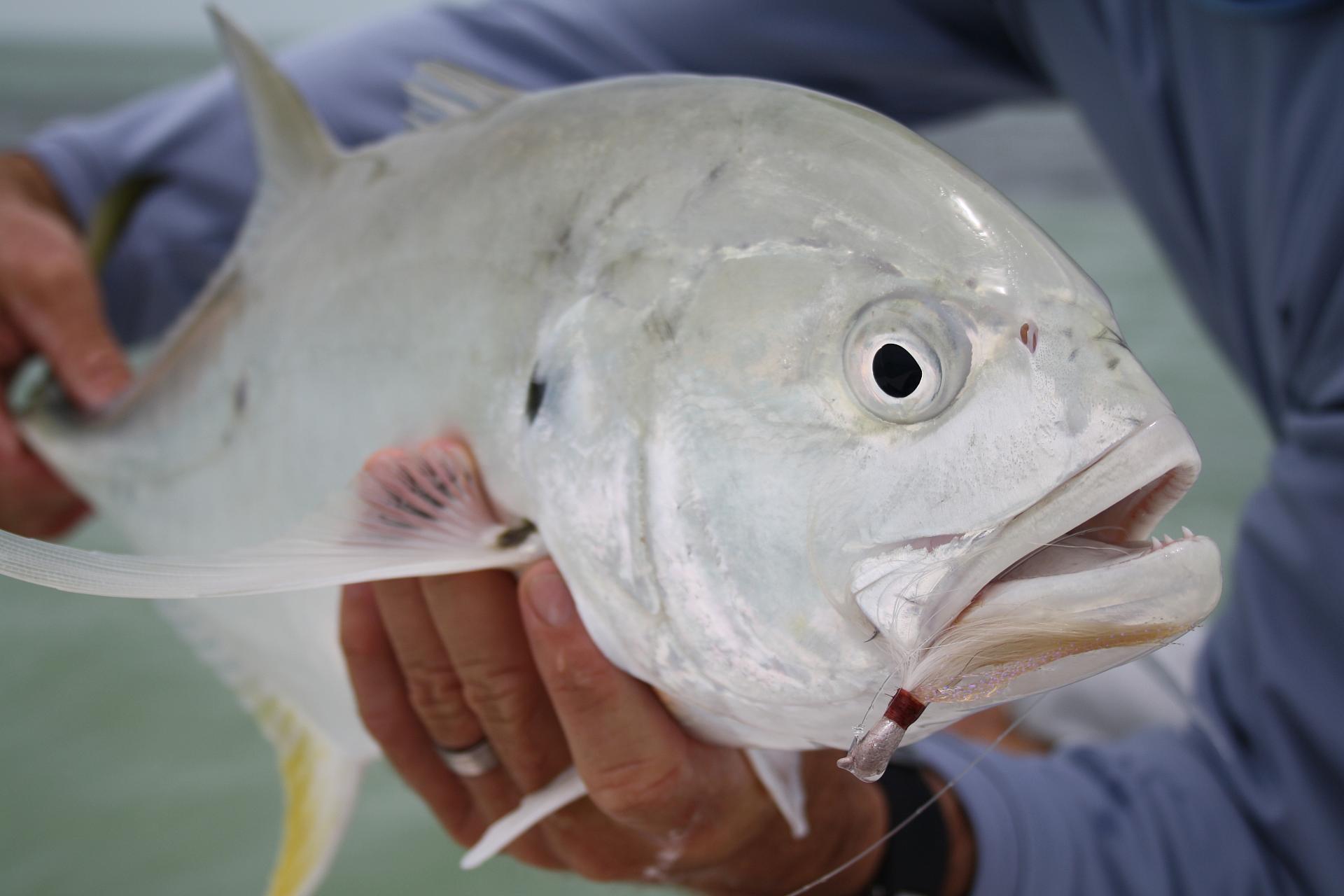 Deep into an unusually cold and wet spring, the call came in. Come June, would anyone from Outdoor Canada be available to head down to Key West, Florida, spend a few days fishing the flats and field testing Columbia Sportswear’s 2013 line of PFG (Performance Fishing Gear) clothing? After confirming it wasn’t just a cruel joke, I was in.

Only 90 miles from Cuba, Key West is perched on the southernmost tip of the Florida Keys—an archipelago extending southwest from Miami, dividing the Atlantic Ocean to the east, from the Gulf of Mexico to the west. On a map, the Keys look kind of like they fell off the mainland and are being swept away. Which they sort of are. Climate change is not going to be kind to this region, and moreover Key West is notorious for collecting the sort of eccentric, indolent, burned-out or iconoclastic folks who are naturally drawn to the end of the world.

Between residents like master big-game angler Ernest Hemingway, and a succeeding generation of chemically-altered, thrill-seeking angler/writers like Richard Brautigan and Thomas McGuane, who publicized its amazing skinny-water light-tackle fishing, there are few more storied angling destinations in North America than the Keys. The deep, offshore waters hold billfish, snappers and grouper, and just a few miles off the town of Key West you can target sharks, barracuda, tarpon, bonefish and the legendarily elusive permit on the flats, which are vast expanses of crystal-clear water only a few feet deep.

The full story of my trip to this remarkable—and utterly alien—fishing destination will appear in an upcoming issue of Outdoor Canada. But for now here are a few things I learned when I visited during the last week of June. They may seem obvious, but aren’t, exactly. By the way, sharp-eyed weather watchers might recognize June 24 as the day Tropical Storm Debby made landfall in south Florida, which leads to my first lesson… 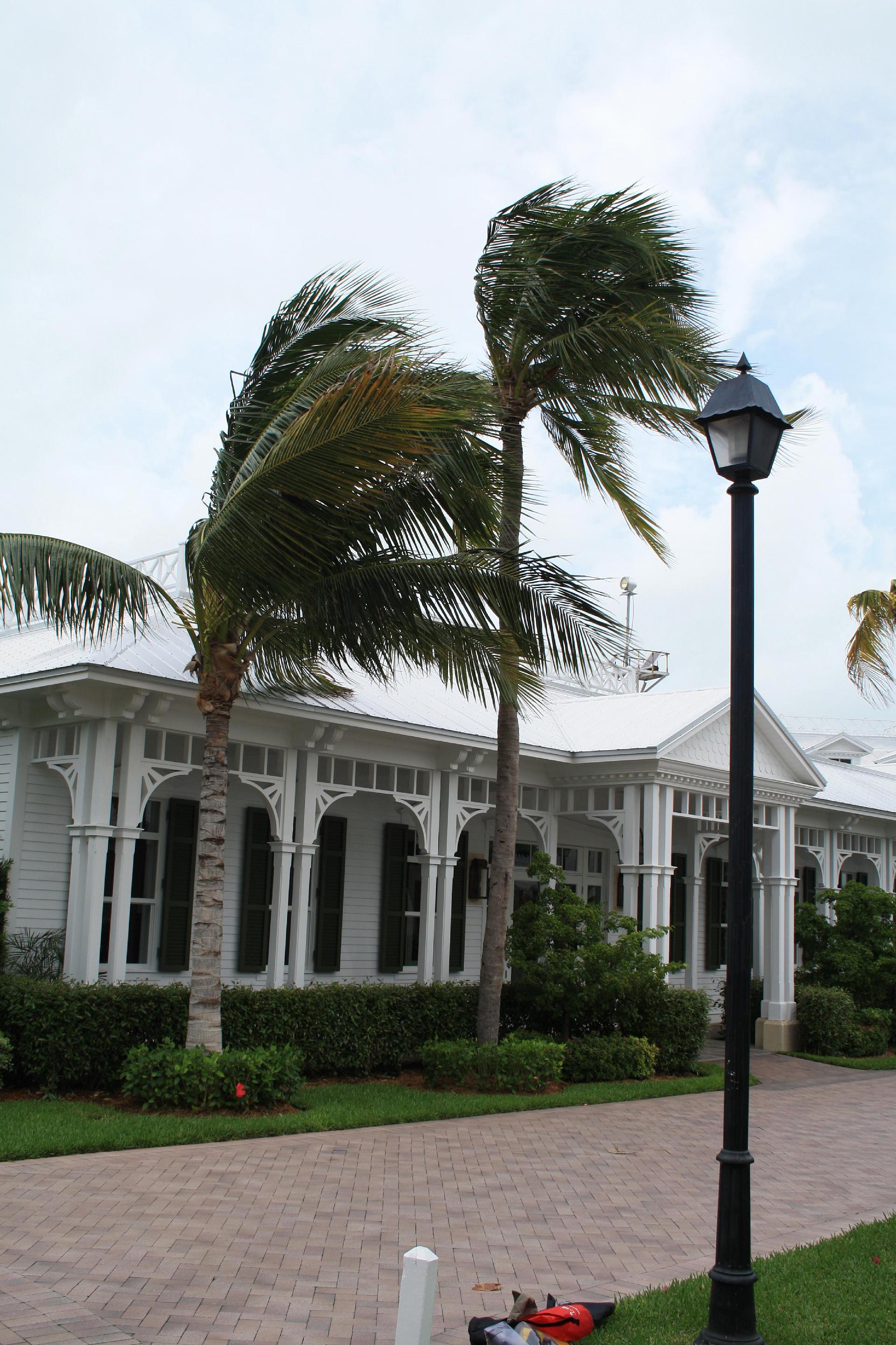 When I got up for my first morning of fishing, the worst of the storm had passed, but it was still drizzling, and the wind outside my cottage was howling at 30 knots or about 55 kilometres per hour.  At home wind and rain mean cold (or at least cool) conditions, even in summer, so I bundled up, cringed and stepped outside into… a blustery sauna. Despite grey skies it was over 30C, and the wind was hot and wet.

If you think it’s tough to hook walleye or bass during a cold front, imagine what it’s like in the day or two after a tropical storm. Action on the flats is 100 percent sight-fishing. There’s just so much water and so little obvious structure that blind-casting (or what we northerners call “casting”) is pointless. Not only did the wild weather have the fish hunkered down, sight fishing was impossible because the water was churned up. Still, all was not lost… 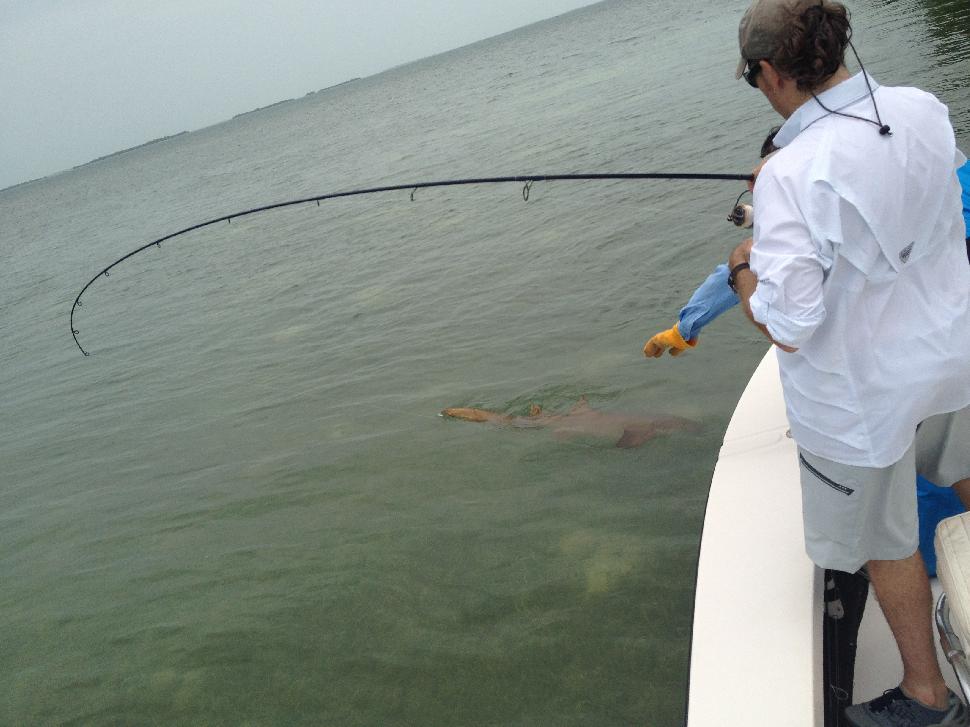 With the wind still blowing over 30 knots on Monday, it looked like our group might not even get on the water, given the limitations of our guides’ 16-foot flats skiffs. Eventually they decided to give it a try, but my guide greeted me with this apology: “I’m sorry man, but all we can do is anchor by the mangroves and just go shark fishing.” Are you kidding me? Instead of sitting in my cubicle in Toronto I have to fish for “just sharks.” Boo hoo.

Because you will get wet. My Columbia clothes, like the Airgill Chill Zero shirt, Airgill convertible pants and Powerdrain shoes performed exceptionally well, but whatever their pedigree you must have lightweight, synthetic quick-dry clothing. Even in fine weather you’ll be perspiring and hopping in and out of the skiff to wade. Running to the fishing grounds in rough conditions, I was soaked in about 5 minutes, but once we got there, dried in about 20. I cannot imagine the misery of being soaked to the skin in cotton clothes that chafe, don’t dry and if they do, get stiff with salt.

The sun is hot. 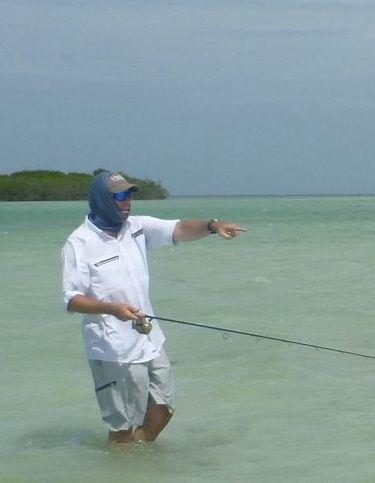 By my second day the sun had appeared, but it was a mixed blessing. Sunscreen may keep you from burning (as much), but it doesn’t make you comfortable. On a flats skiff, there’s nowhere to hide from that blistering tropical sun, and before long your exposed skin starts to feel painfully hot. Unless you enjoy feeling like a French fry under a heat lamp, you’ve got to cover up. I always thought the pictures of tropical anglers wearing gloves, face masks and neck gaiters (BUFF is the best known, but Columbia and other companies make them too) were kind of silly, even histrionic. Not anymore.

This blows my mind, but the best technology for controlling, propelling and even anchoring a flats skiff in water up to 10 feet deep is a stick. Actually, it’s a 24-foot fiberglass composite pole, and the guide wields it while standing on a fish-spotting platform mounted above the outboard. This is about as easy as it looks, but my guides made it look effortless.

The power trio of Florida flats fishing—tarpon, bonefish and permit—are exceptionally spooky fish. Imagine a brown trout in a heavily pressured river after a drinking a couple of Red Bulls, and you’ll get the idea. Since blind-casting is pointless, you stand in the bow of the skiff possibly for several hours, keyed up and ready to cast as soon as the guide spots a fish.

When the guide quietly but urgently says: “Bonefish, two o’clock, 60 feet out, moving right to left,” you have to drop your bait no more than an arm’s length ahead of it. And did I mention that it’s windy? Also, live crabs are just about the least aerodynamic bait you’ve ever flung. And you may have only one shot before the fish freaks out and takes off. Because when spooked, flats fish don’t hide behind a rock, they flee the flat, and fast. Believe it or not, even the sharks are fraidy cats once they spot the boat.

Flats fishing is a huge rush.

On the flats there are long stretches of nothing, where your main entertainment is staring into the water looking for flickers of movement. But when a fish is spotted, there’s a massive rush of adrenaline, excitement, panic and if you hook one (or two) controlled chaos. With the waiting, the stalk, the tension and then the explosive action it’s more like hunting. In fact, when you blow your cast badly, the guides even call it “buck fever.” I’d prefer not to divulge how I know this.

But watching, ready to set the hook, as a bonefish noses toward your bait or cranking back a 12-inch-long lure as fast as you can with a ’cuda in hot pursuit is about as good as it gets. Until you hook one. Then it… is… ON. In saltwater, even the prey fish (bones and permit) are incredibly fast and strong, and the predators (’cuda, sharks) are not only powerful, but dangerous, too.

I like how anglers keep score down south. Spotting a prime species is considered good, and making a cast to one is a win. In fact, hooking and landing big guys like permit and tarpon is almost considered gravy. I don’t want to give it all away, but fish were indeed spotted, cast to and, as you can see below, in a few cases, actually caught.