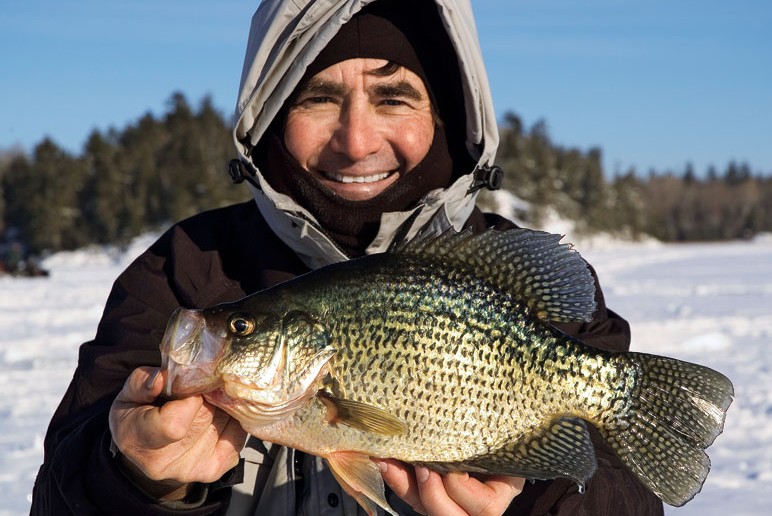 How to Fish Last-ice Crappies

Few fish mesmerize me more than huge, 16- to 17-inch-long crappies weighing two or more pounds—the surprisingly tough fight and all those tasty fillets win me over every time. Many anglers think you have to hitch a ride to the southern U.S. to catch such monsters, but you don’t. In fact, it’s often easier to tackle a trophy-sized crappie right here in Canada, especially if you haven’t put away your ice-fishing gear yet. That’s because last-ice is one of the best times to catch numbers of plate-sized crappies, as well as giants of eye-popping proportions.

And while you don’t have to head south for big crappies, there is a sneaky trick you can borrow from the good ol’ boys in places such as Alabama, Arkansas, Georgia and Louisiana—the spider rig. All you have to do is modify this open-water technique for ice fishing.

Spider rigs consist of eight or nine rods in holders spaced around the front half of a boat—there are so many rods sticking out that the boat looks like a giant arachnid, hence the rig’s name. At the end of each rod you’ll usually find a pair of jigs, lures or minnow-baited hooks, so there are routinely 16 or 18 baits in the water.

Once rigged up, the boat is ever so slowly pulled forward using an electric trolling motor, with the set-up covering a wide swath of water. This blanket coverage is key to the technique. So, too, are the multiple baits—they simulate a school of minnows, first attracting, then triggering, even reluctant crappies to bite. But how can this be applied to ice fishing?

Well, most provinces allow you to ice fish with two rods. And most also let you dangle at least two hooks, and usually three, off each main line. Yet few hardwater crappie anglers take advantage of this by copying the spider rig to cover as much water as possible.

The best way to mimic the spider rig technique is to drill three holes, with one hole three feet to either side of the centre hole. This way, you can place your transducer in the middle hole and monitor your sonar screen while you comfortably jig the two outer holes with a rod in each hand. I like to drill at least six sets of holes spaced far enough apart that I can move from set to set to cover a good portion of a bay or section of ice.

As for fashioning the tandem-rig for each line, this is easily accomplished by running the end of your line through the eye of a jig and letting it slide freely while you tie a second jig to the end of the line. Then run the free jig up the line so it’s 12 to 18 inches above the bottom one. Make a simple overhand loop in the main line and pass the jig through it one or two more times to create a double or triple surgeon’s knot. Moisten and tighten the line so the resulting loop is about the size of a dime. If you’re using three jigs or hooks, do the same thing with the third jig or hook another foot or so up the line (see “Spider bait” below for bait suggestions).

Despite ice fishing with multiple jigs like this, I’ve rarely hooked more than one crappie at a time. Some days, for instance, the bulk of the fish will inhale the bottom jig, while other times a disproportionate number will fall for the top imitation. Regardless of which hook they hit, hit them they will—particularly those mesmerizing trophy-sized slabs.

most of my hardwater spider rigging, I like to use 1/32- to 1/8-ounce jigs, depending on the aggressiveness of the crappies. And I rarely tip the lures with live minnows, although that’s certainly an option. Instead, I prefer one- and two-inch soft-plastic dressings such as Berkley Power Minnows, Gulp! Alive! Minnows and Lindy’s Munchies Tiny Tails. Similarly sized marabou jigs are another great option.