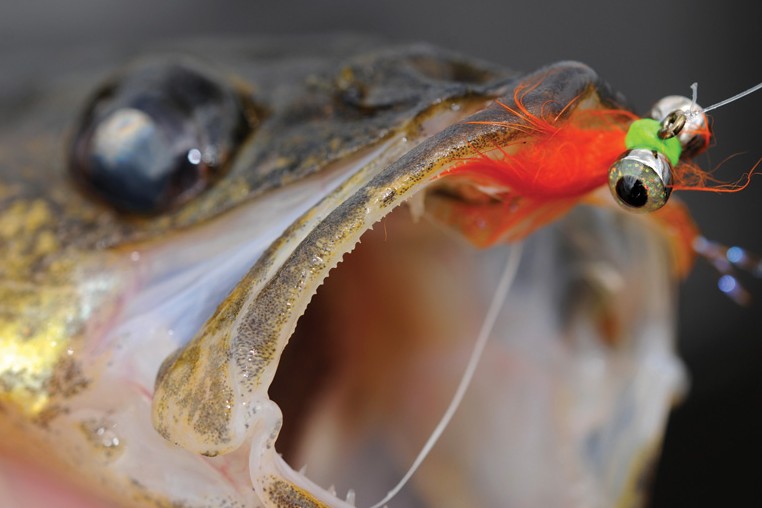 When my friend Lee Murray first asked me to go fly fishing for walleye a few years ago, I was skeptical. Walleye on the fly? I thought. Is that even possible?

Now, I’m no stranger to walleye, having grown up fishing for them in my home province of Manitoba, and in northwestern Ontario. I loved trolling, jigging, casting and doing just about anything to feel that deliciously familiar tap, tap of a biting ’eye.

Then a not-so-funny thing happened after I moved to southern Alberta in the late 1970s: I developed a passion for fly fishing for trout, and walleye were knocked off my angling radar. Oh sure, I still fished for them with spinning gear whenever I travelled elsewhere, but there was always that niggling feeling I was betraying my new love of trout on the fly.

As it turned out, my favourite trout streams were either closed or unfishable due to spring runoff when Lee asked me to join him, so I figured, why not? A few days later, we were standing beside a southern Alberta reservoir in the bright afternoon sun. With a shoreline devoid of trees, and shallow water showing no visible fish-holding structure, the lake looked lifeless. I grew suspicious. Was Lee having me on?

As I cluelessly stood on the bank, watching for rising fish, Lee began casting a lime-green Lefty’s Deceiver on his six-weight graphite wand. On the second cast, the rod doubled. Seconds later, he landed a one-pound walleye. On the next cast, he caught its twin. That was all the proof I needed. I tied on my own Deceiver and started working out line, but the first few casts netted only pesky weeds.

Lee advised me to slow down my retrieve—walleye being walleye, they wouldn’t otherwise chase the fly. On the next cast, I let the streamer sit briefly, then started a calm, steady retrieve. When I felt resistance, I thought it was weeds again. But then I lifted the rod and felt the familiar throb of a walleye. I brought in the fish and my heart raced as I bent over to slip my hand around it—my first-ever ’eye on a fly.

Over the next several hours, we caught dozens more walleye, quitting only when the late-evening chill finally pushed us off the water. I’d arrived a skeptic and left a believer.

Lee, 47, has been fly fishing for walleye for 20 years, starting when he was working in northern Alberta. He is self-taught, learning by trial and error. That day on the reservoir, we used floating lines, five-foot-long heavy monofilament leaders and weighted streamers that sank to the bottom. We could have added splitshot, but didn’t need it. Most of our fish were caught in four to six feet of water.

When the walleye are deeper, it’s time to switch to a quick- or full-sink line. The key is to keep the fly just off the bottom, and for this, Lee has a nifty trick. He rubs dry fly flotant, such as Gehrke’s Gink, on his streamers to give them enough extra buoyancy to suspend. Then with every strip, the streamer darts toward the bottom and floats back up, simulating a wounded minnow. At the strike, there’s no need to haul back as if you’re hooking a tuna—just steadily tighten the line while gently pulling back on the rod.

Lee and I used Deceivers on our outing, but many other streamer patterns will work for walleye, including Clouser Minnows, Woolly Buggers and other leech patterns in sizes 2 and 4. For colours, try any combination of white, silver, chartreuse, black or blue.

The best time to go after walleye is late spring and early summer, when the fish are still in relatively shallow water. But no matter when you go, I bet your first time fishing for ’eyes on the fly won’t be your last.