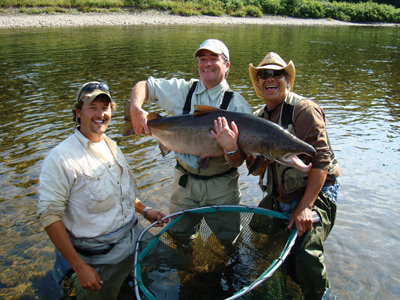 Best for giant Atlantic salmon.  During the late 1800s, much of the Grand Cascapedia was the private fishing preserve of Canada’s governors general. That alone speaks volumes about the quality of the river’s Atlantic salmon fishery. Now consider that two of the few documented 50-pound-plus Atlantics caught in Canadian waters came from the Cascapedia. And just two years ago, Montreal angler Murray Palevsky released two salmon weighing more than 40 pounds apiece, just hours apart from the same pool. Add a recent agreement with the Gesgapegiag First Nation to end netting at the mouth of the river, and the fishing stands to get better still—there’s already been a surge in the number of larger salmon heading upriver. Much of the great fishing can also be attributed to the Cascapedia Society, which manages angler access to public and private stretches through a series of draws. As well, catch-and-release is mandatory in June, July and September. The concept seems to be catching on: even with an allowable harvest of 100 fish in August, only 25 Atlantics were kept last year. In the early-morning light during a recent visit, I could see a dozen salmon swaying in the current at my feet and still more behind a ledge extending partway across the river. Later, a fellow guest on his first Atlantic salmon trip landed a 38-pound female from the same pool—yet more proof the Grand Cascapedia can’t be beat.