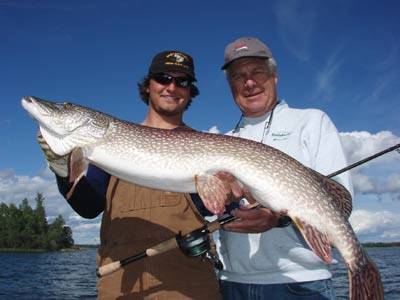 Whether sight-casting to huge pike, jigging and trolling for overgrown lake trout or drifting flies for grayling, there’s no place in the world quite like Great Slave. Here, the expectations of catching 30- to 40-pound lakers and pike are so high, 20-pounders elicit a mere yawn. This lake is cold, very deep (more than 600 metres) and frozen eight months of the year—the resulting frigid temperatures mean you don’t have to dredge the depths to hook a trophy.

When to Fish: Mid-June to mid-July is best.

Where to Fish: Focus on shallow bays in the lake’s north arm.

Why We Chose It: Lake trout; Trophy fish

When to Fish: The first three weeks of July are best.

Where to Fish: Trust your guide. The fish can be in anywhere from five to 90 feet of water.

Why We Chose It: In 2008, Arctic grayling; Good numbers of average-sized fish

When to Fish: July.

Where to Fish: Focus on streams and rivers in the lake’s eastern arm.

Why We Chose It: Lake trout; Abundance of large fish, and great scenery and lodging

When to Fish: July through early September.

Why We Chose It: Pike; Prime habitat that grows big fish

When to Fish: June through September.

Where to Fish: Weedbeds in shallow bays and channels.

Tip: Use baitfish fly patterns such as Lefty’s Deceivers and Clouser Minnows, or foam poppers.