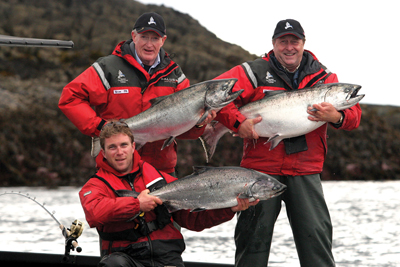 Location: An archipelago in the Pacific Ocean, also known as the Queen Charlotte Islands, in British Columbia.

This spectacular West Coast archipelago—until recently known as the Queen Charlotte Islands—is home to all five species of salmon, but the chinook reign supreme. Haida Gwaii is where migrating fish come to put on weight en route to their natal spawning rivers. Forty-pounders fall prey to slow-trolled cutplugs all summer, and few thrills compare to watching line peel off your mooching reel as a mighty silver king leaps repeatedly, streaking northbound for Alaska.

Haida Gwaii is my spiritual home, where my mind goes when I daydream—and I daydream often. The place is magical, complete with fog-shrouded, fir- and spruce-covered mountain slopes sliding into the Pacific Ocean and, of course, extraordinary salmon fishing.

I’m particularly blessed when it comes to fishing for chinook in the wild archipelago many still know as the Queen Charlotte Islands. For some strange reason—I can’t explain it—I can do no wrong. I simply feel at one with the fish.

On one memorable occasion, for example, I was trolling cut-plug herring on the west side of the islands and hit upon the magical speed and depth. In a matter of hours, my buddy and I landed 17 magnificent kings in the 20- to 37-pound range. It was glorious. I’d feel the subtle tap of a wild, silver-sided fish swipe my bait, carefully feed it a bit of line, tighten up, set the hook and watch as all hell broke loose.

There is nothing—nothing—that compares to hooking a chinook on a long mooching rod and watching your single-action reel spin violently out of control as the magnificent fish leaps out of the water, several times in rapid succession, heading straight for Japan. There’s a reason they’re called kings, and Haida Gwaii is where they reign supreme.

When to Fish: June through August is prime.

Where to Fish: Just outside Virago Sound, from Cape Edenshaw to Klashwun Point.

Why We Chose It: In 2009, Chinook salmon; Breathtaking scenery, big fish and five-star accommodations

When to Fish: Check with an outfitter for the best times for runs.

Where to Fish: A short distance from Tasu Inlet; the guides will put you on the fish.

Tip: Troll cut-plug herring on 15 pulls at the mouth of the inlet.