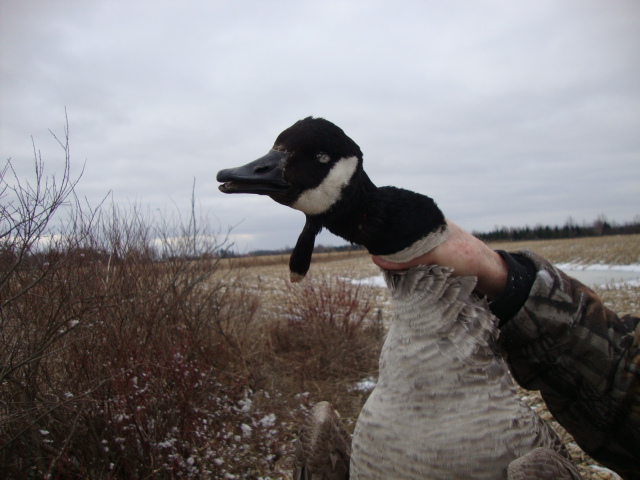 Help Solve the Mystery of the Bearded Canada Goose!

To all you waterfowlers out there, here’s a bit of mystery you may be able to help solve. Last February, hunter Bill Pennell harvested a rather unusual Canada goose on a friend’s farm near Caledon, Ontario.

Namely, the bird sported a beard hanging from its neck.

It was so unusual, in fact, that the Brampton man took his goose to nearby Advanced Taxidermy to ask the experts there if they’d ever seen such a thing. They had not.

“It was almost like the bell of a moose,” says Advanced Taxidermy’s James McGregor, noting there were no bones in the appendage. “It was a tag of skin that was completely feathered. I even gave it a pull to see if it would come off.”

So, did McGregor and his colleagues, who’ve seen all manner of wildlife over the years, know what it was?

“I have no idea what it was!” he says. “It was one of the weirdest things I’ve ever seen.”

We sent pictures of the bearded bird to our hunting editor, Ken Bailey, himself an avid waterfowler. He was likewise stumped, as were his hunting buddies.

And so the mystery continues. One thing is for certain, contends Bill Pennell’s son, Brian: “It’s not a joke. We kept the head and tail feathers in the freezer in case the MNR [Ministry of Natural Resources] wants them.”

If you have ever seen a similarly bearded Canada goose, please let us know. And if you have any theories as to what exactly the beard is, we also want to hear from you. Please email us at letters@outdoorcanada.ca, or leave your comments here or on our Facebook page.