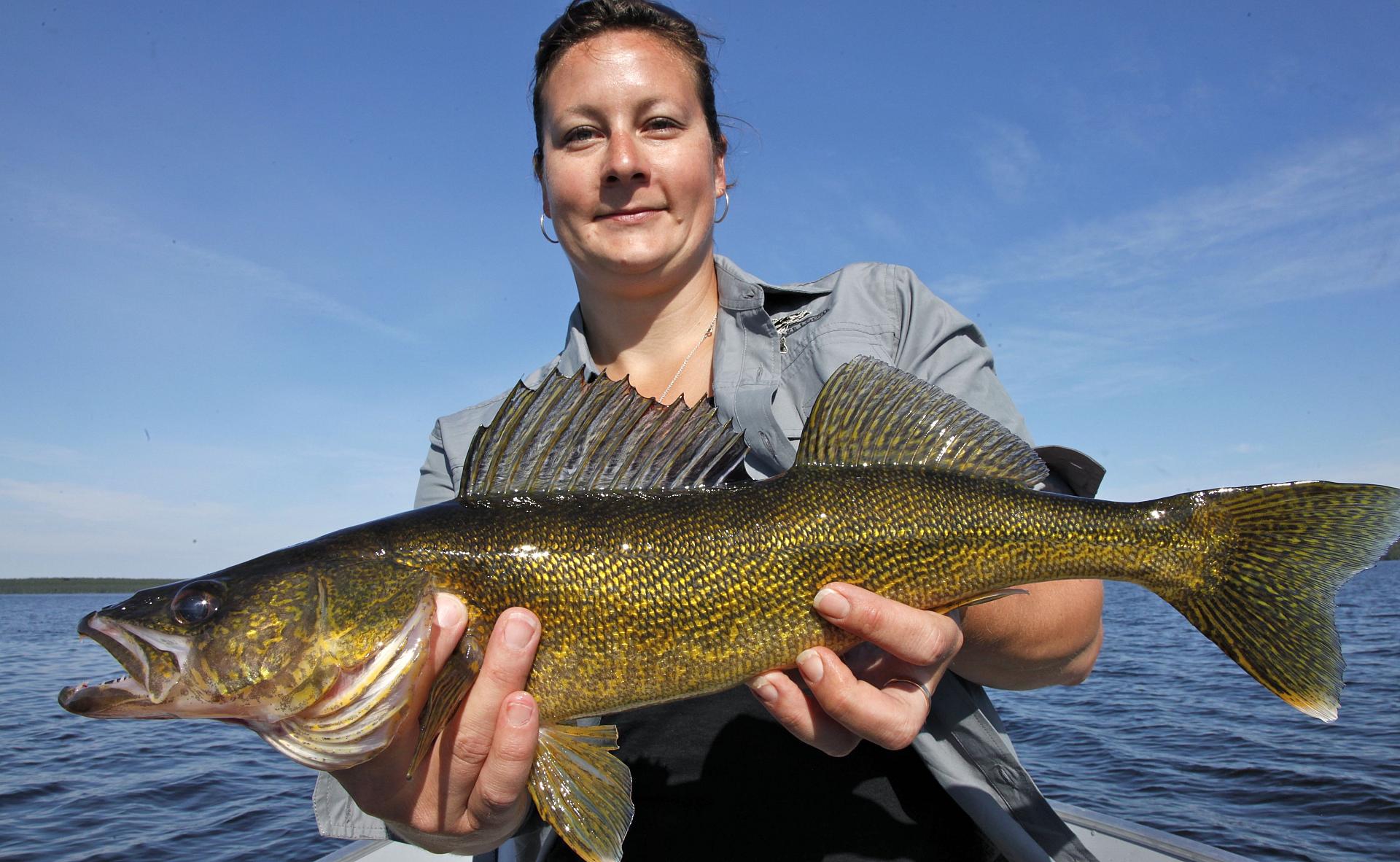 How to Catch Big Walleye in Spring… Anywhere in Canada!

Spring walleye across the land

From prairie potholes to rivers to Shield lakes, here are the top walleye-catching tactics for spring

There are plenty of reasons why walleye are the most sought-after fish in Canada. For starters, they’re handsome, gregarious, relatively prolific and widely distributed in lakes, rivers and reservoirs across the country. Plus, they grow quite quickly to a large size, and bite eagerly on a wide variety of presentations all year round. And perhaps best of all, they taste great no matter how you prepare them.

Yes, walleye are obliging characters, but that compliant nature can also be vexing. Since walleye are able to adapt so wonderfully well to lake-specific characteristics, they can be challenging to catch if you don’t take into consideration the make-up of the lake, and instead stick to the tried-and-true tactics that work elsewhere.

You need to understand the type of walleye water you’re fishing, then adapt your seasonal presentations accordingly in order to consistently catch fish. With that in mind, here are some deadly, yet overlooked springtime tricks for the main types of walleye waters across the land. 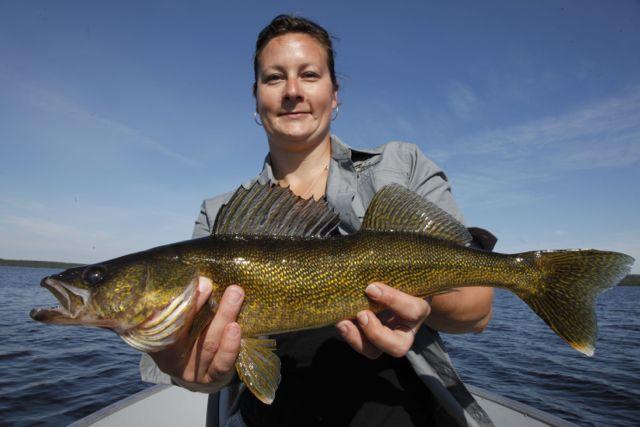 Ontario’s Bay of Quinte, Manitoba’s Lake Winnipeg and Saskatchewan’s Tobin Lake may be provinces apart, but if you’re a walleye angler you won’t find much of a difference from one to the next. Their common distinguishing feature, as with the hundreds of others lakes like them, is that they have relatively little structure.

They also have at least one major river system flowing into them, which draws walleye from kilometres around during the spring. In fact, so many walleye often crowd the one or two major spawning rivers that the fish frequently begin their migration in the fall and continue moving over the winter. This is why ice fishing is so spectacular in spots such as the mouth of the Red River on Lake Winnipeg.

It’s also why, come opening day in the spring, anglers often find the fish concentrated in such large numbers, especially if a dam or weir blocks them from moving farther upstream. This scenario is practically made to order for fishing with vertical or near-vertical presentations, such as drop-shot rigs, three-way swivel rigs and jigs tipped with live bait or soft-plastics.

Interestingly, many walleye anglers still don’t use drop-shot rigs, thinking they’re only for bass, but nothing could be farther from the truth. As a matter of fact, the drop-shot is one of my top go-to spring presentations when I find the fish in the current at the mouth of a river or below a tailrace, and the bottom is littered with snags. 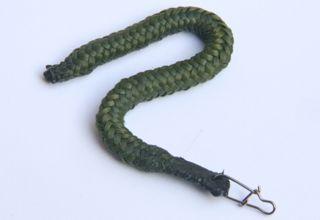 But here’s the key: Instead of using a lead sinker, which is prone to getting caught on bottom, I use a so-called slinky weight—a hollow, small-diameter parachute cord stuffed with several small splitshot (above). Slinkies are so slender and flexible they almost never get snagged, and when they do, you can easily pop them free. I then tie a #2 to #6 short-shank hook 10 to 20 inches above the slinky, or the distance you see the walleye suspended off bottom on your sonar screen. For bait, use minnows in cold water, crawlers in warm, or leeches for temperatures in between.

In heavily structured Shield lakes, walleye typically split up and spawn on a several different windblown rocky shorelines and shoals, rather than bunch up around one specific river mouth or tailrace as they do on prairie-type lakes. That’s why water bodies such as Lake of the Woods, despite massive fishing pressure, still produce stellar year classes, year after year—the fish don’t lay all their eggs in one basket, improving their chances of spawning success.

But precisely because walleye often spawn in multiple locations on Shield lakes, anglers need to stay mobile and cover a lot of water. (Note, too, that walleye are faithful for life to their spawning sites, and younger fish learn where to go by following older repeat spawners.)

One of the best ways to cover a lot of water is to troll a spinner rig, either unweighted in shallow water or behind a one- to three-ounce bottom bouncer in deeper sections. If the water is cold, use a single-hook spinner rig tipped with a live or salted minnow. If the water is warm, a two-hook harness dressed with a nightcrawler or scented soft-plastic worm will usually nab more walleye.

For even warmer water, however, dig out the single-hook spinner rig again and tip it with a leech. But trust me on this: step on the leech first to kill it. That way, it will lie out perfectly straight as you slowly troll, rather than curl, twist or ball up. The walleye won’t be able to resist it. 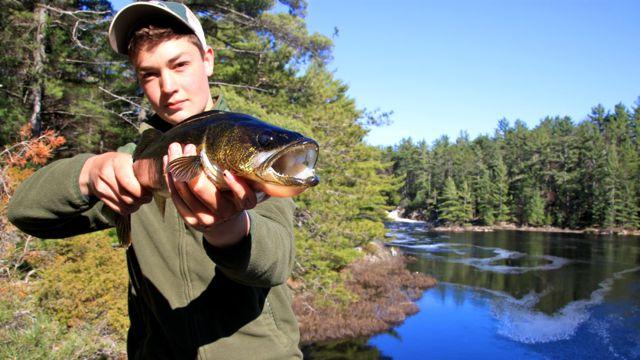 Three-way-swivel rigging is highly effective in rivers during spring. It involves knotting a three-way swivel to the end of your main line, then tying a one- to three-foot length of leader line to one of the two remaining eyes. At the end of the leader, attach a sinker—once again, I prefer a slinky weight. To the third eye, attach another length of leader line, about two to three times longer than the sinker leader, then tie on your lure.

There’s a lengthy list of lures you can use when you pull three-way-swivel rigs, including floating jigs and crawler harnesses, but I almost exclusively stick with a Rapala-type floating minnow to increase my chances of catching a giant. If the water is dingy and dirty, however, as it often naturally is in places such as the Red River when the spring runoff is high, use a crankbait with a rattle inside. You won’t believe the difference it makes, allowing the vibration-conscious walleye to detect the sound via their lateral lines and home in on it more easily.

To fish your three-way rig, hold your boat in the current upstream from the fish so it stays more or less in one spot. At the same time, let out line as your lure wobbles back and forth like a minnow swimming erratically sideways just above the bottom. West coast steelheaders are masters at this hot-shot technique, but it’s just as effective on walleye in moving water.