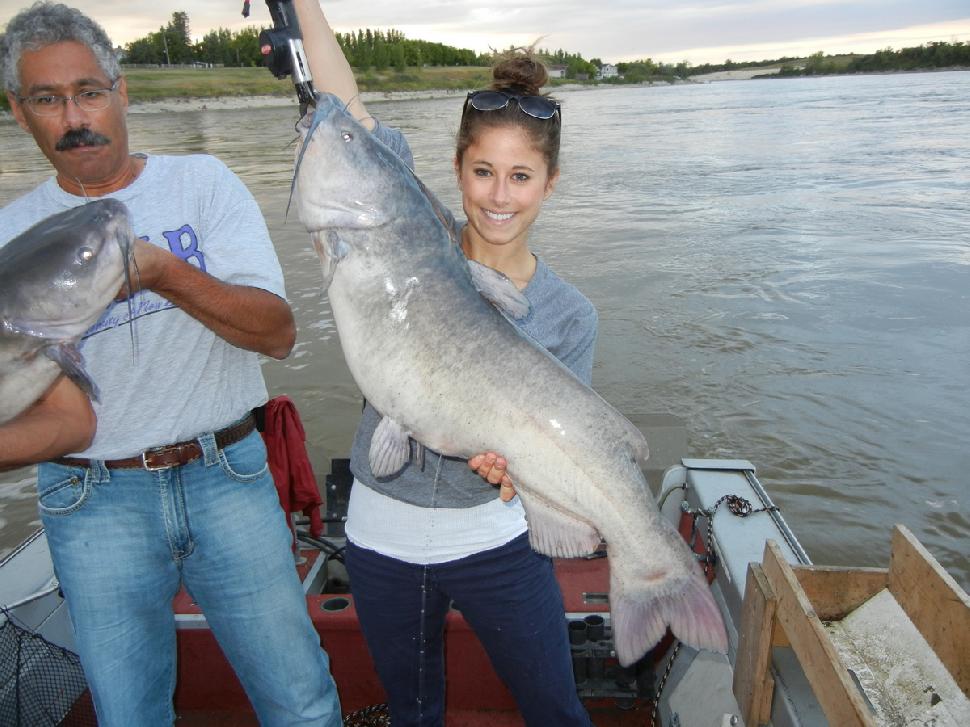 How to catch massive channel cats

Indeed, some of the best muskie fishing on the planet is found in the St. Lawrence and Ottawa rivers where they run through Montreal and Ottawa respectively. And let’s not forget about the spectacular salmon action in Lake Ontario among the shadows of Toronto’s skyscrapers, nor some of the best fly fishing for rainbow trout and brown trout in the Bow Rive, which weaves through downtown Calgary.
And then there are the magnificent channel cats in Manitoba’s renown Red River, especially below the dams in Lockport and the city of Selkirk, where I found myself on Friday with my 11-year-old grandson—and sidekick—Liam.

While Liam and I have fished together since he was barely able to walk, he’s never gone on an overnight trip with me, and the world class fishing for giant Red River channel cats offered the perfect opportunity.

Indeed, how crazy is this. We hopped into the truck on Thursday afternoon and drove over to the city where we enjoyed sushi for dinner at our favourite Japanese restaurant and then a peaceful night’s sleep in one of the hotels out by the airport.

After our wakeup call at 5:00 a.m., we wolfed down breakfast and headed out the door to meet up with City Cats guide Todd Longley, 45-minutes north of the city of Selkirk, Manitoba.

Todd already had his Kingfisher boat in the water when we pulled up to the access ramp, so Liam and I unloaded a few essentials and away we went. That’s the other nice thing about fishing big city waters—Todd had us at our first fishing spot within five minutes of pulling away from the dock.

And my, oh my, what a spot it was. With bald eagles perched on the tree tops along the river bank and soaring overhead, Todd gave Liam a quick primer on how to rig the hooks with his secret bait—leopard frogs—and then showed him how to set, or rather, not set the hook, when you’re using circle hooks.

Todd, who enjoys celebrity status on the river as the “Rock and Roll Guide” for his shaggy hair and colourful tattoos that include a greenback walleye painted on one of his legs and a channel cat on one of his massive arms, is a master when it comes to dealing with kids. I watched him present last year at a KingFisher Boat seminar at the Winnipeg Boat Show where he brought two youngsters from the crowd up on stage with him and patiently walked them through the whole rigging and hook setting process. So I knew he was good at his job—mighty good!

And then it happened: Before Todd could get the second rod rigged, Liam spotted his rod tip twitch, yanked it out of the holder, reeled down quickly without the cat feeling any tension, waited until the fish decided to run and then set the hook like a pro. It was a good job, too, because after a no-holds barred wrestling match in which it appeared several times the fish was going to win, Liam fought the big bruiser into the net.

And are you ready for this? It was just shy of weighing 30-pounds.  So Liam’s first ever channel cat was a Manitoba Master Angler Award winning trophy size fish. Is that crazy or what? But it gets even more ridiculous.

Before we had been fishing for 90 minutes at the first spot, Liam landed four more almost as big, Manitoba Master Angler Award winning channel cats under Todd’s tutelage.

Soon, he and Todd were high-fiving, fist-banging and trash-talking each other like they’d been best fishing buddies all their lives. I was just waiting for Liam to say that he wanted to get a channel cat tattooed on his leg like Todd.

By noon, I kid you not, in just a little over four hours of fishing, we had lost count of the total number of massive channel cats that we (mostly Liam) had caught and released. We conservatively set the numer at 20, but I reckon it was many more, and only three of the fish were smaller than 35-inches in length, which would qualify for Manitoba Master Angler Award status.

As a matter of fact, by catching five fish above the limit, Liam made the grade for his Manitoba Supreme Angler Award pin and certificate. (I’ll have more to say about this super smart fishing incentive program in a future blog).

And remember, this wasn’t an expensive fly in fishing trip to some far flung location.  We were fishing in downtown Selkirk, Manitoba only a few minutes north of Winnipeg.  So, if you’re in the city on business, or simply want to experience the finest trophy channel cat fishing on earth, give Todd a call.

In fact, watch this short video that I shot on Friday and you’ll see just how easy it is to take pleasure in this amazing fishery. And why Todd says, “it’s city cats, not kitty cats!”