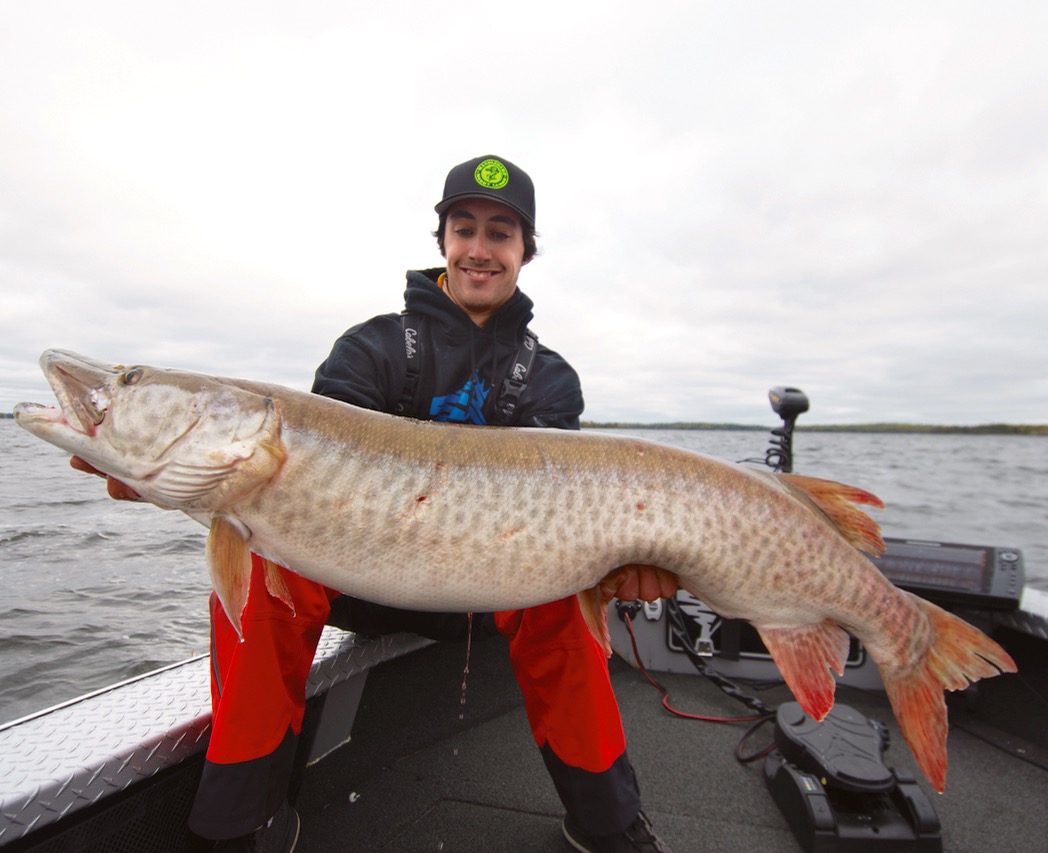 To increase your catches on the open water, try fishing the foam

You’ve seen them many times, those white furrows of foam that form on the surface of a lake when the wind is blowing steadily in one direction. Like most anglers, however, you’ve probably paid little attention to them. They’re created by so-called Langmuir circulations—commonly known as Langmuir currents—named after physicist Irving Langmuir, who was fascinated by the windrows of seaweed he saw in the Sargasso Sea in 1927.

Many years ago, I discovered the astonishing effect these Lazy Susan-like circular currents have on triggering fish to bite, but I’ve kept that ace tucked safely up my sleeve ever since—until now. If you want to catch more and bigger bass, walleye, trout, salmon, muskies, pike and panfish, here’s why you should also keep an eye out for Langmuir currents.

Langmuir discovered that when the wind blows steadily in one direction, it doesn’t push the surface water the way we would intuitively think it does. Instead, it forms counter-rotating, horizontal tubes below the surface that resemble ice auger blades (see “Line time,” below). More specifically, it produces a series of twin tubes that rotate in opposing directions—one clockwise, the other counter-clockwise—gathering up surface material from as far as 10 metres away and delivering it to the centre of the trough, hence the foam lines. These furrows can stretch for kilometres, typically spaced 15 to 45 metres apart.

Buoyant material such as weeds, wood and plastics remain on the surface and get mixed up with the white foam we see. Meanwhile, heavier or suspending material, including plankton, is spun downward on a fish-feeding conveyor belt. What’s still more intriguing is that Langmuir currents only form under relatively tight parameters—they require wind speeds of at least 11 kilometres an hour, yet disappear when the wind tops 45 kilometres an hour. In deep lakes and oceans, their effects can reach as deep as 200 metres, in the process influencing fish behaviour in remarkable ways.

Whether it’s the wind-induced current or exchange of oxygen-rich water, heat and food, I’m not really certain, but Langmuir circulations certainly produce bites. I suspect it’s a synergistic blend of all of those factors. Regardless, anytime I see a foam line passing over a specific structure or piece of cover I’m fishing, my heart skips a beat because I’ve come to learn over the years that it’s as close as you can come to a guaranteed catch.

This past fall, for example, I was muskie fishing with my grandson, Liam, and a southwesterly wind was producing well-defined white Langmuir foam lines. One of the cells was spread out and positioned perfectly over a small rock pile, a spot-on-the-spot that often hides a big toothy predator. I told Liam to drop his cast carefully into the bubbly foam directly over the rocks. As soon as his lure splashed down, we both spotted the huge chrome-sided fish shoot out from behind its ambush spot and lunge at the lure. Liam set the hook and pandemonium erupted at the side of the boat. I could barely lift the four-foot-long, thick-sided giant out of the net.

Casting to a spot influenced by a foam line is my favourite way to incorporate Langmuir currents into my fishing patterns, but trolling in and alongside them is also effective. The only problem is you can’t control where these currents form, so if a favourite hot spot happens to lie between two foam lines, it could be a downer. But for the most part, the white lines across the surface point to some of the best fishing opportunities to be had. 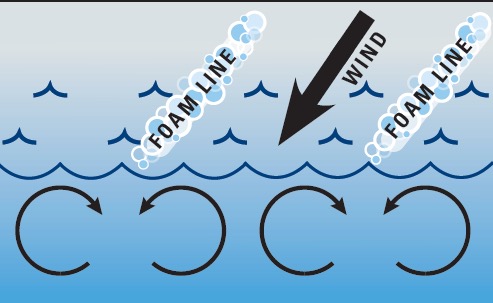 Langmuir circulations (above) develop when the wind blows across the surface to create converging [c] and diverging [d] counter-rotating tubes that suck everything around them into the centre. Buoyant material such as weeds, wood and foam create lines on the surface, or windrows, oriented in the same direction as the wind and at right angles to the waves. Non-buoyant matter is delivered on a conveyor-like maelstrom down toward the bottom of the lake.