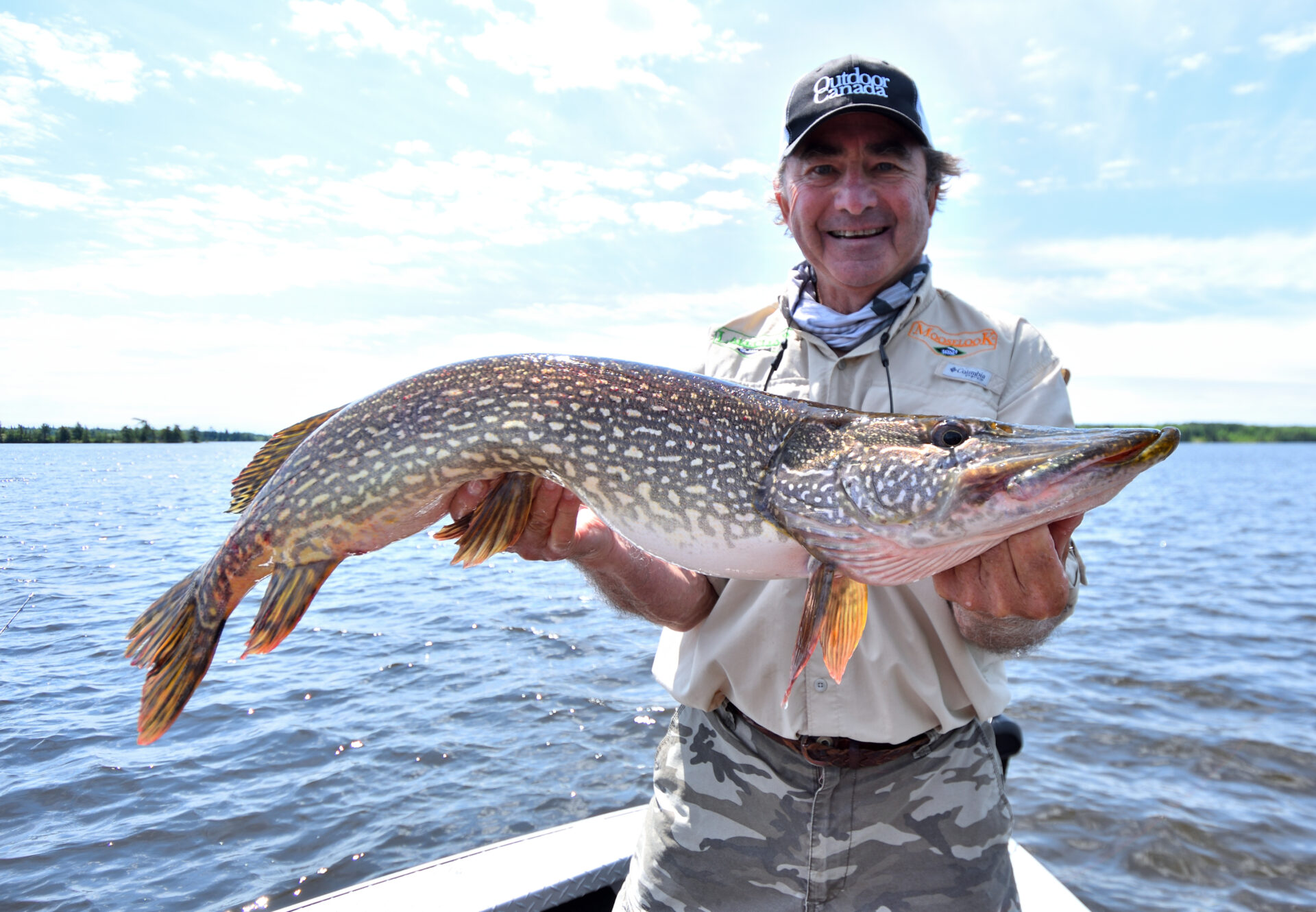 TAKE ME TO YOUR LEADER

Throw away those crimped-wire muskie & pike leaders, and learn this easy way to make your own

I am as guilty of it as anyone when it comes to fishing for muskies and pike. Because they’re the apex predators in most of our waters—and sit at the top of most anglers’ bucket lists—we bestow them with almost super natural powers. But the fact of the matter is they’re simply fish that grow a little bigger and have a few more teeth (okay, a lot more teeth) than most of the other fish. But big and powerful?  Hmmmm …..

What opened up my eyes the first time was fishing for black marlin on the Great Barrier Reef, off the coast of Australia, where a big one is called a grander because it weighs in excess of 1,000 pounds. We settled for little 450- and 500-pound rats.

Ditto, when buddy Mark Stiffel and I caught 800-, 900- and 950-pound Bluefin tuna off the coast of Prince Edward Island fishing with Captain Carl Gallant of Bearded Skippers Deep Sea Charters. We tag teamed—15 minutes on the rod and 15 minutes off— for 90 minutes before gaining the upper hand on the Goliaths.

I’ll never forget the time, too, fishing for blue sharks out of Halifax, Nova Scotia with good friend, Captain Art Gaetan of Blue Shark Charters. We caught, tagged and released 23 sharks one day up to 350 pounds and I was wasted— a total wreck—by the time we headed in. After I landed the first 125-pound blue shark in the morning on a heavy action spinning rod, my legs and arms felt like rubber.  That is when Art said, “That was fun, eh?  Let’s do it again.” And I quietly thought to myself, “Hmmm, let’s not.”

So, forgive me for saying this, but muskies and pike are wimps compared to saltwater fish like sharks, marlin, tuna and tarpon. There is really no comparison.

“Forget tuna and sharks — pike and muskies are even wimps compared to inshore saltwater fish, like snappers, redfish, jacks & bonefish, that weigh 1/2 or 1/3  or 1/4 as much,” says Outdoor Canada, associate editor and fly-fishing columnist, Scott Gardner. “One of my 8-weight fly reels has the drag settings numbered. When I’m fishing for 40-inch pike, I set the drag at 4.5, and the big ones often take 20-30 feet of line on several runs. I use the same reel when I am fishing for 2-3-pound bonefish, and I set the drag at 4.5.  And the bones typically peel off line for 60-90 feet.”

Which brings us to the subject of leaders. Out on the ocean, when it’s time to change your terminal set up, the captain doesn’t hand you crimps and crimping pliers to make an elaborate leader. Instead you typically cut off a suitable length of appropriate test fluorocarbon or monofilament and tie up a new one using a super strong saltwater figure-eight knot. And almost universally, the fewer the number of extraneous parts—snaps, swivels, and the like—the better.  So, with that said, let me explain how to make the big toothy critter leader that has never failed me. 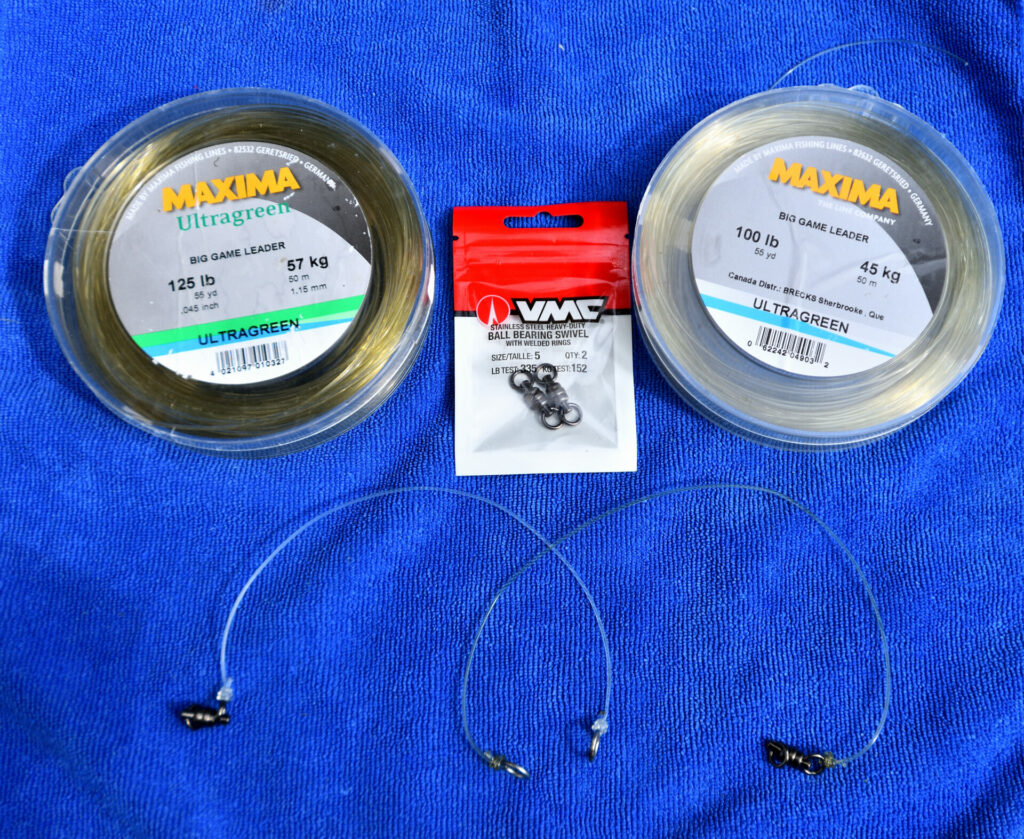 The first thing you’ll notice is that it doesn’t feature crimps. I hate crimps, having had a commercially crimped leader fail and cost me a fish of a lifetime. Another one broke in my hand one time. My leader doesn’t have a snap either, as they’re prone to weakening every time you open them up, change your lure and squeeze them tight again.  Instead, there are only three ingredients: the highest quality stainless steel Size 5 VMC ball bearing swivel, a welded steel ring and a length of Maxima 80-, 100- or 125-pound monofilament or fluorocarbon test line. It takes only a minute or two to fashion and since the swivel and welded ring last forever, you won’t hesitate to cut the line when it is scuffed or make a new one.  I should mention, too, that I keep a quality split ring on most of my lures to attach the welded ring, but you can add one to the ring instead, if you prefer.

Now, simply take your length of leader line and using the same figure-eight saltwater knot I featured HERE, attach the ball bearing swivel to one end and the welded ring to the other.