How to start your snowmachine in the cold—every single time

These cold-weather tricks can save your fishing day... and maybe even your life

The word cold hardly seems appropriate to describe the frigid weather we enjoyed last week across much of Central Canada.  I say “enjoyed” because the polar express was welcomed by many folks like me who love to ice fish.  It froze the slush and packed several inches of solid black ice on the many lakes, rivers, reservoirs, pits and ponds scattered across the country.

That is the good news.

The bad news is that the same frosty weather was problematic for those of us who use snowmachines to trek into the back country for a day’s ice fishing.  Seems when the temperature drops beyond the -30 C threshold, starting up a four-stroke snowmachine is difficult.

Indeed, I was under the gun big time, because the boys from In-Fisherman television were arriving on the scene to film some lake trout episodes with me for airing next season.   And when I turned the keys on my snowmachines the day before we were set to begin filming, they rolled over but refused to start.

If you’ve ever had the same problem, have I got a secret to share with you. 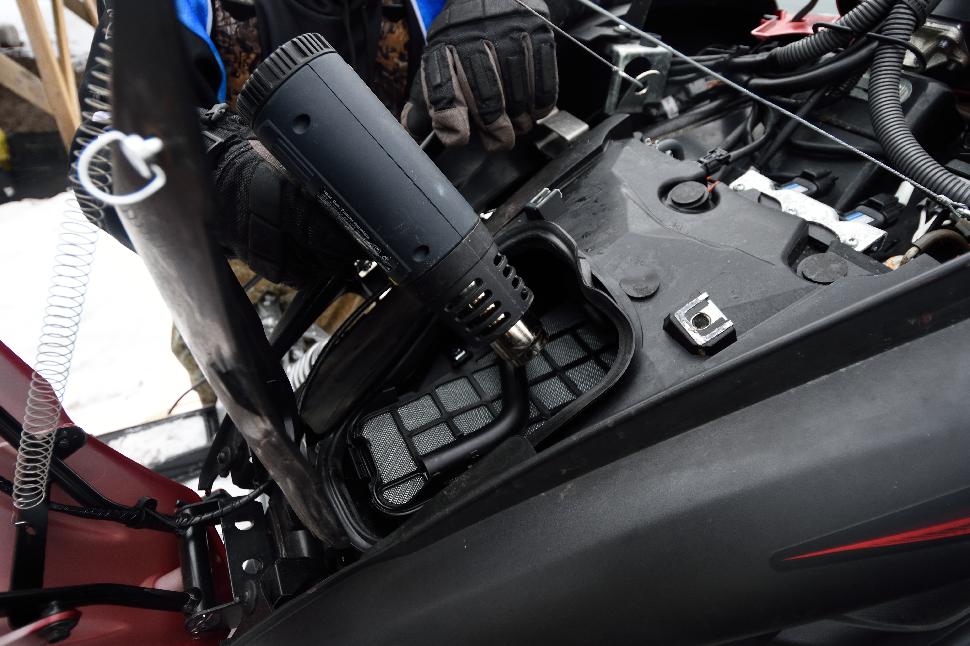 As I mentioned earlier, any time the temperature approaches -30 C, starting a four-stroke snowmachine becomes an issue.  And while many folks think it’s because the battery loses power in the cold (which it does), the battery is rarely the culprit.  Instead, the problem is that the cold fuel inside your gas tank, which doesn’t vaporize properly in the frigid temperature when you turn the key.

And that is where a hair dryer or hot air gun enters the picture.  That’s right, a hair dryer.

What you need to do is simply unlatch the shroud on your snowmachine so that you can expose the air intake on the engine.  Now, turn on the hair dryer, adjust the temperature setting and blow hot air right up and into it.  I like to keep the dryer running for at least four or five minutes, so that when I place my hand around and inside the air intake I can feel the warmth.

Now, immediately turn the key to start the engine as you normally would do, and the purring sound you will hear will be your engine sputtering to life, ready to take you on another fantastic fishing trip into Canada’s winter wonderland.

Because you won’t be able to plug your hair dryer into a socket anywhere once you get to your favourite fishing spot—at least not on the lakes that I fish—be sure to start up your snowmachine every hour or so, and let it run until the engine is really warm.

Good luck and I’ll see you out on the ice.