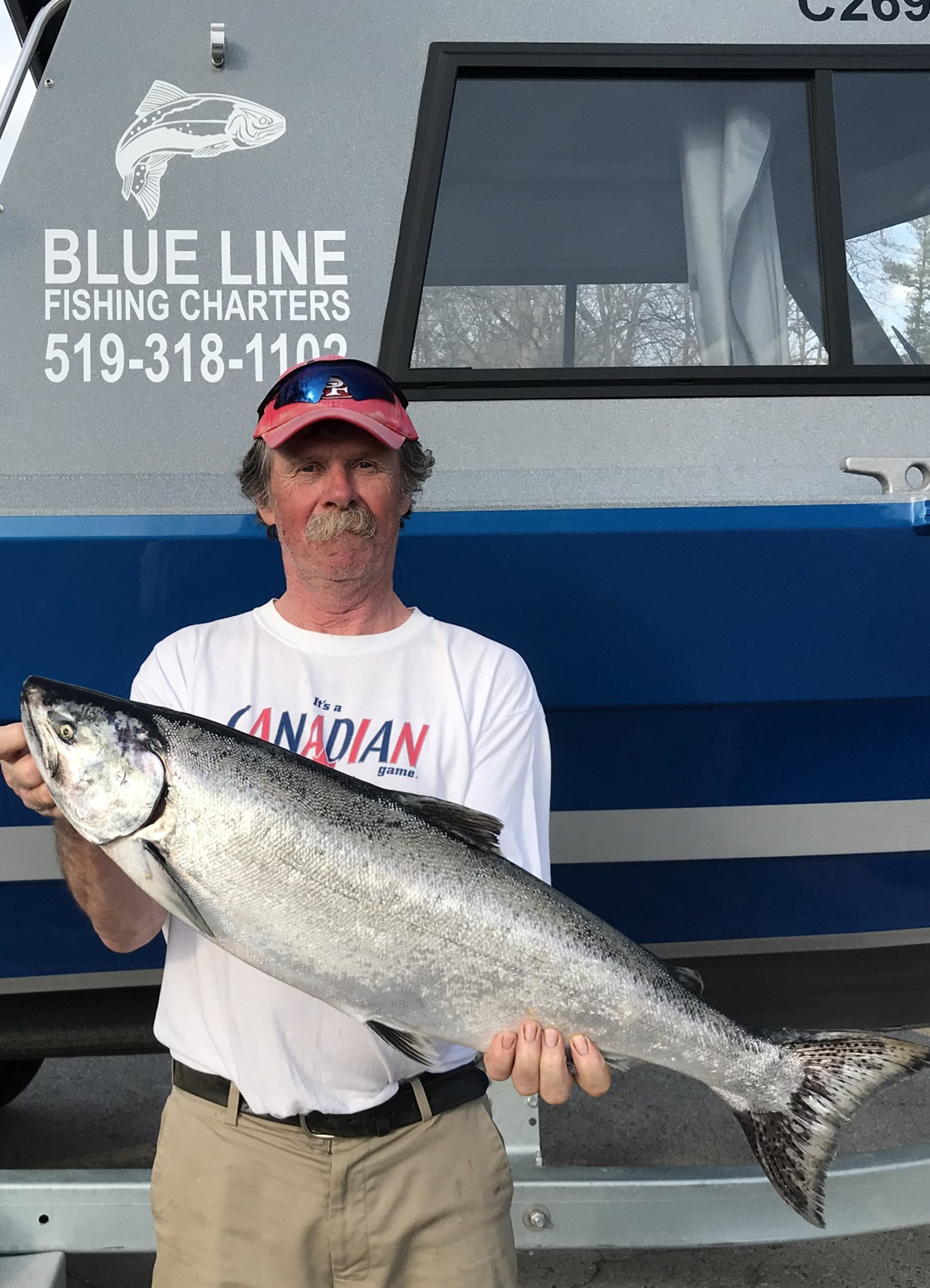 Find out the lures, tactics and hot spots for big chinooks and cohos

If you live in or near Sarnia, Ontario, it is safe to say that it is Show Time with the staging of the 43rd annual Bluewater Anglers Salmon Derby. The contest runs over 10 days, starting Friday, May 3rd, and concluding on Mother’s Day, Sunday, May 12th. And there are so many ways you can win one of the more than 100 prizes (including a trip to Prince Edward Island to fish for Bluefin tuna), that it is almost silly.

There are prizes for both shore and boat anglers, and you can see the whole list by visiting the official Salmon Derby website, where you can also enter the contest. But, I am going to share some local salmon secrets, and tell you—straight from the horse’s mouth—how you can catch the biggest fish and win all the marbles.

“The salmon fishing is getting better every year,” says Captain Fred Wondergem, who operates Blueline Fishing Charters on Lake Huron. It was in Wondergem’s fully equipped 24-foot Kingfisher charter boat, that last year’s winner scooped up 2018’s prize-winning chinook. “The alewife and smelt populations collapsed in Lake Huron several years ago, throwing the predators into a tailspin, but there is a resurgence of forage fish. I’m seeing a lot of smelt in the stomach’s of the fish I clean, and the salmon are back out cruising in deeper water.” 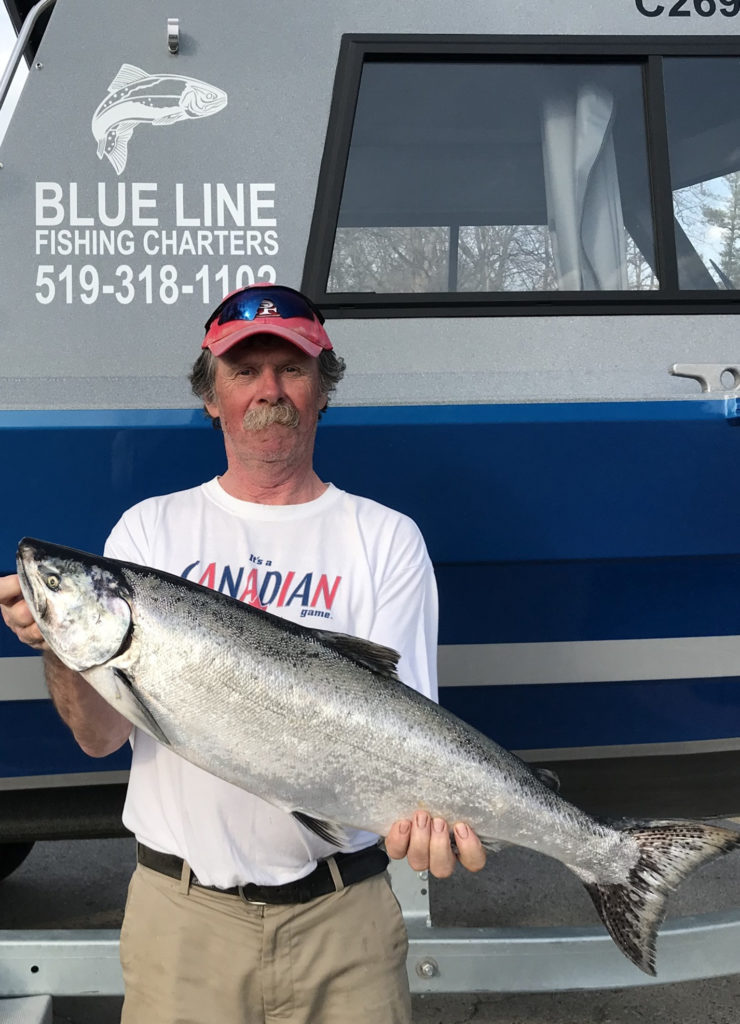 Wondergem’s guests are also catching plenty of acrobatic Atlantic salmon, which are being planted by the Michigan DNR in the Lexington and Alpena areas of the lake. As a matter of fact, he had a guest from the East Coast last summer who caught his first ever Atlantic while fishing with him. “He had to come to Southwestern Ontario  to catch it,” Wondergem chuckles.

But it is the chinooks and cohos that excite most anglers.

“They aren’t yet the size of the salmon in Lake Ontario,” says Wondergem, who notes that as the forage rebounds, the size of the salmon will increase proportionately.  “The cohos average about 2 to 6 pounds while the chinooks run 5 to 15 pounds. But every year we catch kings pushing 20-pounds. They get bigger and bigger as the season progresses.”

The salmon are also magnificent table fare, coming from the crystal clear waters of Lake Huron. And let’s not forget about the spectacular steelhead, brown trout and lake trout fishing that the southern portion of the Great Lake has to offer.

“The rainbows are coming out of the rivers right now, having just spawned,” explains Wondergem. “They are a bit worn out, but they quickly regain their vigour. Early in the season, they run around 5 to 6 pounds in size, but in August and September, they are on fire. It’s not uncommon for my guests to tangle with 20 steelhead a day, including fish up to 12 pounds.” 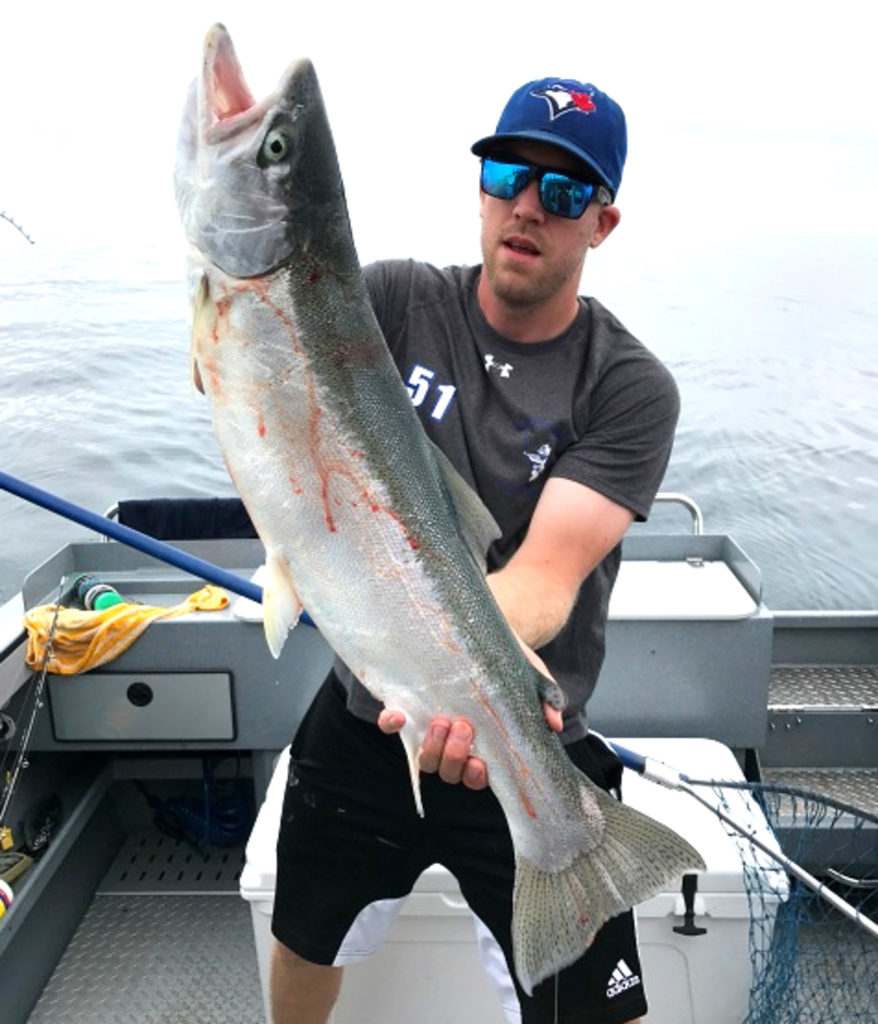 And when folks just want to enjoy fast action from gargantuan fish, Wondergem heads to the nearby proven lake trout grounds. These dwellers of the deep school in ravenous packs, he says, vacuuming up untold numbers of round gobies that fuel the energy cycle.

“The cool thing about the southern basin of Lake Huron,” says Wondergem, “is that there’s such a wide variety of species, that you don’t know what you’re going to catch.  One of my guests hooked a huge catfish in 100 feet of water last year, and the walleye fishing is getting better and better every season. Those fish are migrating out of the St. Clair River.”

With such a fish-filled bounty at his doorstep, it’s not surprising that Wondergem relies on a variety of ways to catch the fish, including downriggers, planer boards, leadcore outfits and Dipsey Divers.  When I asked him where he’ll start fishing, and what he’s going to put on the ends of his lines to nab this year’s Salmon Derby winner, though, he replied in two words: Kettle Point.

“There is a beautiful reef there that runs out for several miles,” he says. “You need to monitor you sonar, though, because the bottom changes dramatically. I’ll be running 10 colours of lead core and relying on my downriggers. And because the water temperature is cooler in the spring, I’ll troll more slowly, around 2.4 miles per hour.  I also always have a flat-line out the back of the boat, spooled with 12 pound test monofilament. It’s funny because you can never predict what will excite the fish. Some days it is the leadcore off the planer boards; other days the downriggers are firing on all cylinders.”

Last but not least, Wondergem says Pro King, Moonshine and Silver Streak spoons top his list of go-to lures, especially in the Monkey Puke colour and shades that glow.

“Early in the morning, when it is still dark,” says Wondergem, “the salmon’s eyes have to adjust.  Glow spoons are excellent. When daylight arrives, however, there is something about the colour Monkey Puke that turns the fish on.”

Oh, yes, and when I ask Wondergem about the last ace that he tucks up his sleeve, he looks to the left and then to the right, and whispers, “Shark cannonballs.  They attract salmon and put so many fish in the boat for me.”

So there you have it, folks. If you want to get on some great early season salmon fishing and win superb prizes, check out the Bluewater Anglers Salmon Derby. And if you want to enjoy some fabulous fishing along Ontario’s Blue Coast, contact Captain Fred Wondergem. You won’t be disappointed.