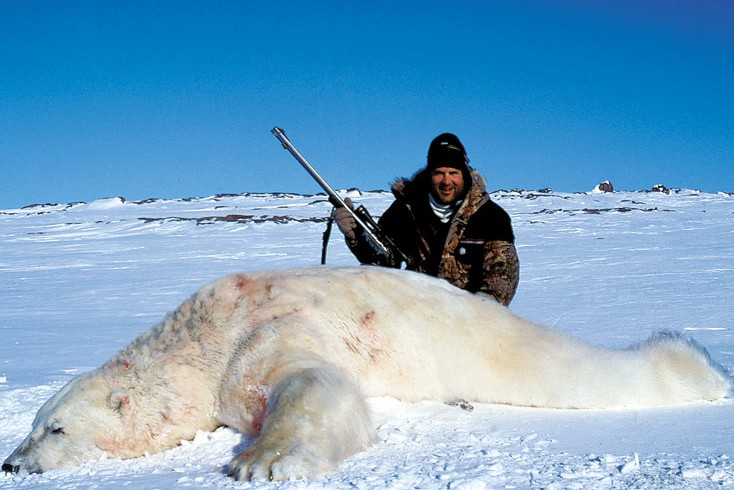 No part of this country is more remote or desolate—or just plain difficult to access—than the Arctic. Consider a polar bear hunt in the N.W.T. Most journeys begin in southern climes aboard a luxury jet, but after that, the planes keep getting smaller and smaller until you finally find yourself riding in a sled, or, in the local parlance, a “komatik,” hauled by a pack of sled dogs. A sled? That’s right. By law, polar bear hunters in the N.W.T. can only travel by foot or with a sled and dog team. Support crews may follow along on snowmobiles, but the dog team sets the pace of the hunt.

For the most part, polar bear hunting takes place in the early spring when winter’s shroud of darkness gives way to more hours of sunlight. Temperatures can still plummet to well below -40°C, mind you. Frostbite and frozen toes and fingers are a given, as is snow blindness. Along with the obvious challenges of sitting for hours on end in sub-zero temperatures, the ever-changing weather adds to the danger. No wonder: the hunt is conducted on the frozen Beaufort Sea, where polar bears search for seals near breathing holes and stretches of open water, or leads.

While tales of rescues on floating packs of ice are uncommon, they’re not unheard of. A slight change in wind direction can open up a lead where one didn’t exist before, preventing a return to mainland-or worse. Spring storms, too, can be some of the most brutal of the year, creating whiteouts so intense it’s impossible to tell up from down. Often, there’s nothing to do but crawl into a tent and wait out the storm, sometimes for days.

Polar bears have huge ranges, and you can travel for days, if not weeks, on end to find one. And unlike other regions in Canada, there’s not much else to see in the way of game in the Arctic; you’d be fortunate to come across a seal or a fox on this hunt. No, to be successful, you need to be patient. Finding a set of huge, pigeon-toed tracks in the snow may very well be the highlight of the week.

Sub-zero temperatures—Frostbite and frozen toes and fingers are a given, as is snow blindness.

Obviously, keeping warm is paramount, so the highest-quality Arctic gear is crucial. Feet and hands are the toughest body parts to keep warm, but don’t forget to cover your face; it only takes a matter of minutes to get frostbite on your cheeks or nose. You’ll also need a good pair of sunglasses or tinted goggles to prevent snow blindness. And keep this in mind: if you get sick or injured out there, you could be days away from getting medical attention. Preventing the preventable is key. Although polar bears are huge animals that can weigh more than 1,000 pounds, I know hunters who have killed them with weapons ranging from bows to high-powered rifles. Shots are typically at close range, often when the bear is held at bay by the sled dogs or after he’s haplessly wandered into camp. The Inuit guide will likely have a .223 or .303 for backup, but most hunters I know say they don’t put much stock in those rusty old firearms—they prefer to get the job done quickly and cleanly themselves.