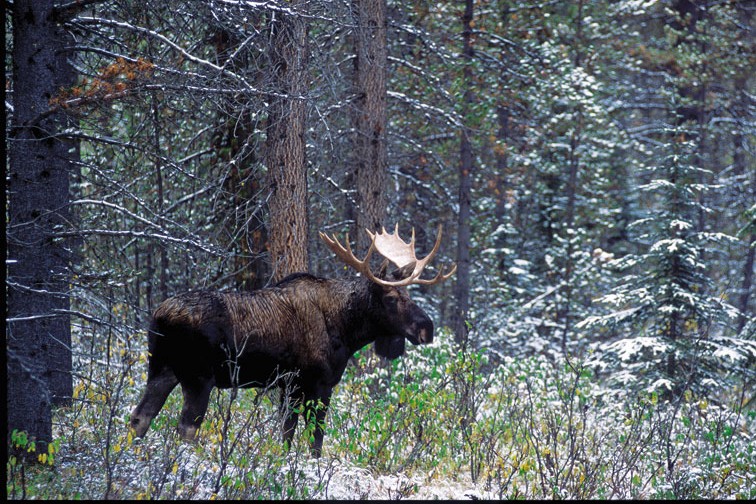 Hunting bull moose after the rut? Well, put away those calls. To bag your moose you'll have to go to him. Here's how

Few hunts can match the drama or exhilaration of calling in a bull moose during the rut. With that first response to your plaintive calls, anticipation reaches stratospheric levels, and stays there until the culmination of your encounter, whether you get your bull or not. When it plays out as planned, you end up mano-a-mano with the largest deer in the world virtually in your lap. It’s flat out electrifying, and that adrenaline rush is one of the main reasons most moose hunters prefer to hunt the rut. Another reason the rut is popular is that you don’t really have to find a bull moose. Simply put yourself in good moose habitat, turn on the charm, and wait to see if a randy bull comes to you.

In most provinces, however, opportunities to hunt the rut are limited because of season or licence restrictions. That leaves many hunters no choice but to head afield after the rut, when the focus of moose hunting takes a complete 180-degree turn. No longer are you able to select a convenient location close to a trail or cutline and enjoy the realistic expectation of having a moose walk up for a look. Instead, to put a bull moose in the freezer, you now have to go find him—a search often compared to finding the proverbial needle in a haystack, despite the animal’s immense bulk.

To be successful, hunters seeking post-rut bulls must first understand that moose go through a significant behavioural change following the breeding season. Asserting dominance and securing the right to breed are very taxing on bulls. Violent fights are not unusual during the rut, and serious injuries to the head, neck and hindquarters are common.

As a result, mature bulls are often very weak by the end of the breeding period, with next to no residual body fat. That means they must rest and recover from their wounds, as well as regain their strength and rebuild their fat reserves for the coming winter. To do this, they seek significant quantities of food in a secluded location where they can feed undisturbed for several weeks.

When I suggest that finding seclusion is high on a bull’s to-do list at this time, I actually mean they’re seeking refuge from predators and people—which they might otherwise ignore when the love of a cow is at stake—rather than from each other. Interestingly, about the only company bulls willingly tolerate after the rut is that of other bulls. I suppose they embrace the “All’s fair in love and war” ideology, for they often form fraternal groups, with apparently no ill will toward their recent competitors.

These fraternal groups are most common where moose densities are the highest. And in the most heavily populated regions, the groups are further segregated by age: old bulls hang with other old bulls, while young ones associate with those similar in age. I once saw eight bulls sharing a willow flat in a sub-alpine river valley northwest of Fort St. John, B.C., and I’ve read that as many as 20 have been spotted together.

Since access to food is the driving force for post-rut bulls, hunters should focus on areas where moose can find an abundant supply of easy sustenance. And while bulls will browse on a wide variety of woody plants, their favourites across much of their Canadian range at this time of year are willows and young poplars.

Examine aerial photographs and topo­ maps before heading afield, and look for out-of-the-way locations that offer expanses of preferred feed. Old burns are sometimes the best option, offering vast areas of single-species deciduous growth of the same age. Further, these burns are often criss-crossed by deadfall and windfall, making it difficult for predators such as wolves to get at the moose. Unfortunately, it’s also tough for hunters; negotiating this mess can be brutal on your shins—but if you want to pick apples, you have to go to the apple trees.

Logging clear-cuts, meanwhile, are another honey hole for late-season moose. And river valleys that flood periodically are also magnets for post-rut bull moose, as the flooding creates ideal conditions for willow growth.

After identifying a prime feeding area, it’s time to consider your approach. Basically, there are two effective hunting tactics for late-season bulls: spot-and-stalk and still-hunting. Of the two, the universally preferred is spot-and-stalk. For this you must first find a suitable vantage point (preferably one that makes use of natural relief), then sit and watch.

As any moose hunter will tell you, the ability of these huge animals to disappear when they don’t want to be found is nothing short of amazing. Spotting from a distance, though, allows the hunter a great tactical edge, and on sunny days, the light reflecting off the paddles or ebony hide of a mature moose can be visible from miles away.

Once you spot a bull, you must plan your stalk. While a moose’s eyesight is suspect at best, its superb senses of smell and hearing more than compensate. It’s imperative, therefore, that you plan your stalk to take advantage of the prevailing winds. If a bull winds you, the game is most assuredly over for the day.

A moose’s acute hearing can be even more difficult to overcome, especially when the ground is covered with brittle leaves. As a result, you must consciously force yourself to move slowly, fighting the urge to hurry. Windy days are best for moose hunting at this time of year, as a strong breeze helps suppress unavoidable noises while making it easier to establish a preferred direction for your approach. Snow can also be an ally, thanks to its noise-dampening effect.

Moose tend to move very little when feeding in these habitats, so if you get a good bearing on your animal before you start your stalk, there’s a strong likelihood he’ll remain pretty close to where you first spotted him, even several hours later. As you slowly move closer to where you think he’s holed up, pay attention to discreet clues as to his location. You may hear him moving about as he feeds; the flick of an ear or the glint from an antler can also betray his presence. The closer you get, the slower you must move if you hope to spot him before he detects you.

Still-hunting is also a viable tactic, particularly when there’s a carpet of snow to work with. In the snow, your approach actually evolves from still-hunting to tracking. Many times I’ve been able to walk up on feeding moose by carefully following a fresh track.

The successful still-hunter has to move extremely slowly-slower than what you probably think of as slow, then even slower yet. Take no more than three or four steps before stopping and scanning all around you. Moose often walk in a fishhook-like pattern before bedding down, so it’s important to maintain a 360-degree watch-even when the tracks suggest the moose is straight ahead. I always use binoculars, which allow me to see subtleties in form and colour I’d otherwise miss; they also force me to slow down and search more thoroughly.

Where practical, avoid walking on the track. Stay as far off to one side as possible without losing sight of it. This helps reduce the number of times you’ll be spotted by a bull that’s continually checking his immediate back trail.

When there’s no snow, still-hunting is more challenging, but you can nevertheless find success. Using the natural terrain, wind and sun to your advantage is crucial and, again, a snail’s pace is all-important.

It’s easy to lose your concentration when still-hunting, but the second you drop your guard just might be the very instant a bull moose appears. And that lost moment can mean the difference between a filled tag and the sinking feeling that comes with knowing you’ve just blown the only opportunity you might get. But if you believe there could be a moose around every corner and behind every tree or bush-and you remain patient and persistent-success can be yours.

If you have the option, put away your short-range .30-30 or similar bush rifle (which is ideal for the close quarters of moose hunting during the calling season). While moose hunting at any time is typically characterized by relatively short shooting ranges, I’ve found that extended distances are more likely when you’re going after a bull instead of having him come to you. And you don’t want to find yourself without enough gun if your best, or only, opportunity is beyond 150 yards. In that case, you’re better off carrying the likes of a .270, 7mm, .30-06, .308 or .300 mag, to name a few of the more popular options.