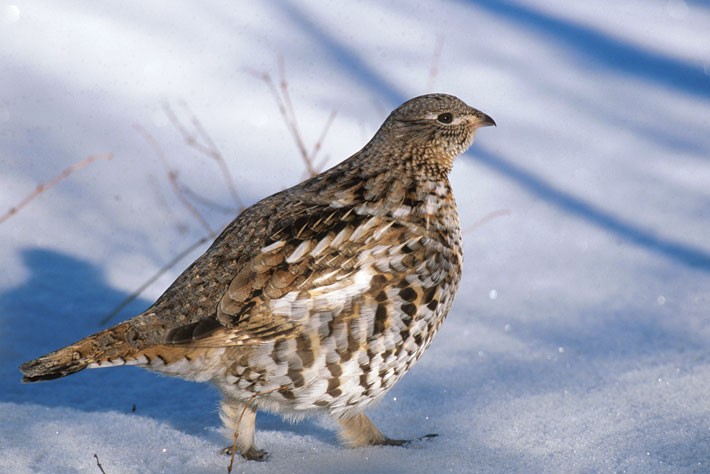 Don't put your gun away yet. Some of the season's best ruffed grouse hunting is yet to come

Across much of Canada, the first of November heralds a transition for many hunters: it’s the unofficial date for giving the shotguns an end-of-season cleaning and switching over to rifles. That’s because November typically brings snow, and snow means it’s time for big-game hunting. Unfortunately, it’s also time for some of the year’s best ruffed grouse hunting.

The biggest advantage for late-season grouse hunters, especially for those not hunting over dogs, is the increased visibility. With the leaves off the deciduous cover, hunters are much more likely to spot grouse perched, or feeding, in the understory—before the birds see them. Also, the white backdrop afforded by the snow makes grouse easier to see. And detecting a bird earlier means the hunter can be better prepared for the flush, leading to improved shooting.

Early in the season, grouse are often in family groups, but as the fall progresses, it’s much more common to find them alone or in pairs. I prefer this, as it means I’m less likely to flock shoot, focusing instead on a single bird. Single-bird flushes also contribute to higher recovery rates for those hunting without canine assistance, as you’re more likely to accurately mark a downed bird if you’re not distracted by other flushes. This is especially important when locating birds in snow.

To find late-season birds, hunt in areas where there’s plenty of food and thermal cover. Second-growth aspen with a diverse understory of rose, birch, willow, hazelnut, alder and similar shrubs, especially those that bear fruit, are prime hangouts for ruffies at this time. This is particularly so when in close proximity to mature spruce stands, where grouse seek protection from the weather and predators.

One of my favourite late-season tactics is to work the edges of abandoned road allowances or cutlines during a warming period. Snow melts away from the edges of these areas first, often exposing seeded clover, which grouse find irresistible. These open corridors also provide extended shooting opportunities when the birds cooperate and flush across or down them.

Hunting with a partner—whether the two- or four-legged variety—provides a considerable advantage. With dogs, they’ll often start out a little haphazardly when there’s lots of evidence, but they’ll invariably settle down. Remember, too, that grouse flushed by a dog often flutter only a short distance before settling into the mid-heights of the nearest spruce. Though ruffies can be difficult to see among the dense branches, a persistent hunter can often get a second or even third opportunity at missed birds.

Two-hunter parties, meanwhile, can do well by concentrating on small patches of quality cover. Simply set up a leapfrog system, whereby each hunter alternately pushes through the centre of the thick stuff while the other waits on the perimeter. I’ve not been able to accurately pattern the direction a ruffed grouse is most apt to flush, though over time I’ve come to generally ignore wind direction as a contributing variable. As a result, I generally set up on the side of a likely patch of bush that has the thickest escape cover in closest proximity. This method is by no means foolproof, but I seem to get my share of shots.

And that, at least, usually makes a cold, late-season day a little warmer.

A 12- or 20-gauge is ideal for ruffed grouse, but it should be fitted with the most open choke-skeet if possible you have. As for barrel length, my preference is 26 or 28 inches. The bottom line is, wing-shooting grouse is extremely challenging, and less-than-sure footing coupled with bulky clothing doesn’t make your gun mount and swing any easier. That’s why I like the broadest shot pattern and smoothest swinging gun possible. And it’s hard to beat standard field loads of #7 1/2 or #8 shot for virtually any situation.