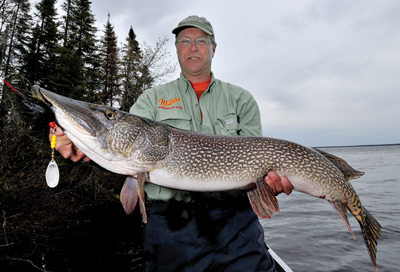 Nothing excites me more than catching huge, 30-pound-plus northern pike with so many gleaming white teeth they can slice a walleye in half. And the best place I’ve found to indulge this passion is 3,900-square-kilometre Kesagami Lake in northeastern Ontario’s vast Hudson Bay Lowlands. There, Kesagami Wilderness Lodge opens its doors for only half the potential season, setting it apart from most other tourist operations I’ve ever visited. That’s right: the lodge caters to guests only when the fishing is at its absolute best, the prime eight weeks after ice-out. Not only does this maximize the chance of catching multiple knee-knocking, trophy-sized pike, it also means the fish are always shallow, accessible and hungry. Combine those conditions with the fact early summer days that far north come with 18 hours of daylight and perfect water temperatures for pike, and you know the odds are stacked in your favour. And you can’t beat the excitement; much of the action is visual, with the prodigious predators inhaling surface lures and flies stripped just under the surface. Along with the short season, the fishery is further managed through Kesagami’s catch-and-release policy and the mandatory use of single, barbless hooks. As a result, the lake’s largest northerns approach 40 pounds, and every year, fish in the 52- to 55-inch range are caught, photographed and released to fight another day.