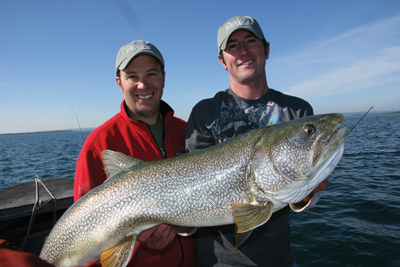 Lake trout. That’s why we wrote about Athabasca in 2000, 2011 and four times in between. Covering almost 8,100 square kilometres, this is another immense Canadian lake boasting huge lakers, including the all-time record—a 102-pound behemoth netted by commercial fishermen. While there are also plenty of trophy pike, lodge consultant Ted Cawkwell summed up Athabasca’s laker fishery best in 2010, praising the “outrageous numbers of 20- to 40-pound fish in shallow water.”

I’d gone to Athabasca intent on catching and releasing as many northern pike as possible on the fly (mission accomplished), but was persuaded to spend three late afternoons chasing lake trout. I’m glad I did. On the first outing, my buddy Ted and I boated 13 lakers topping 20 pounds, along with a pile of teens. And so it went for the other two afternoon trout sessions punctuating our week-long pike fest.

In all, we recorded 27 lake trout weighing more than 20 pounds (and countless lower double-digit fish), including six double-headers and one triple—after Ted released his first fish and picked up his spinning rod to drop down a big Bondy Bait. Very cool, considering we spent less than 10 hours in total targeting lakers. It was also extremely impressive in that we weren’t even in the hottest section of the lake for trout, let alone fishing during the peak bite.

For an even crazier tally of big fish, the time to go is late September, hitting the spawning shallows in the vicinity of mid-lake Johnston Island farther to the east. Ted was there a few years back and his boat chalked up 90 lakers tipping the scales past 20 pounds—in just three days of fishing. And of those trout, eight weighed more than 30 pounds. Says Ted: “It was awesome.”

When to fish: September and October are best.

Where to fish: Work the Russian Reef and other rocky underwater structures in seven to 20 feet of water.

When to fish: Late July through August is prime.

Where to fish: Fish deep water near structures, such as mid-lake islands or humps.

Tip: Troll a Williams C90 Whitefish or a W70 Wabler in the Half & Half Nu-Wrinkle finish, tipped with a four-inch white Exude Tube or Curly Tail on a downrigger.

In 2008, Pike; Good numbers and sizes of fish, and a great lodge

When to fish: Late June to late July.

Where to fish: Deep weedlines or shallow bays with emerging weeds in the eastern end.

Lake trout; The best lake in the country for catching giants

Where to fish: Any of the thousands of shoals.