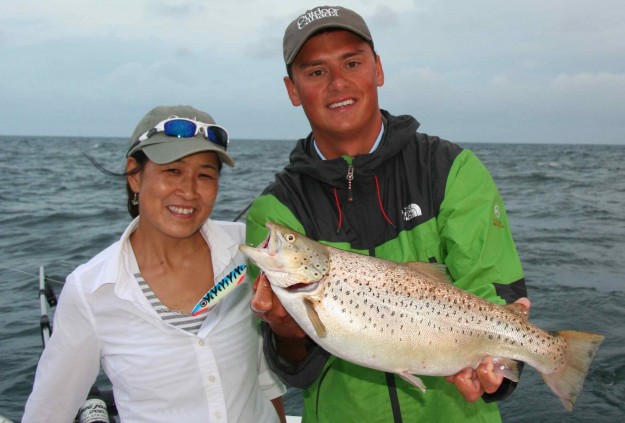 Surprised to see this Great Lake rank so high? Don’t be. It’s full of big, healthy fish. For starters, the 450-kilometre Canadian shoreline has tremendous trout and salmon fishing, both offshore and in the tributaries. Then during spring and fall, 20-pound-plus pike cruise Toronto Harbour and nearby bays, and the bass and walleye action near Kingston is hotter than ever. In fact, there are so many different fishing opportunities, it’s like a dozen waterbodies in one.

In 2010, Largemouth bass; Beautiful setting in the 1000 Islands region

When to fish: The action is great all summer.

Where to fish: Focus on docks and the inside weed edge along gravel shorelines.

Steelhead; Good numbers of fish, and areas where you can get away from the crowds

When to fish: March, when the ice starts to thaw, and again in early May.

Tip: Use roe bags and flies on float reels. Later in the season, try dew worms.

When to fish: Fall promises the best action.

Where to fish: Focus on shallow (four- to six-foot-deep) rock flats and points.

Where to fish: Start in 80 feet of water and work out until you mark fish; the ideal water temperature is 52 to 57°F.

Tip: Troll spoons or cut bait with a dodger on downriggers.

When to fish: April through June.

Where to fish: Jordan Harbour to the Niagara River.

Tip: Early in the year, troll planer boards and Bomber Long As in water as shallow as 15 feet; as the water warms up, move deeper and use spoons.

When to fish: June through August.

Where to fish: Between St. Catharines and the mouth of the Niagara River.

Where to fish: Straight out from Bronte Harbour with your cannonballs in the 47 to 52°F range.