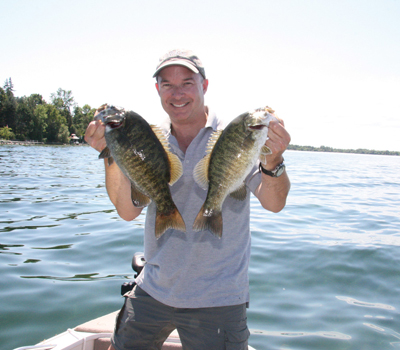 This hot spot’s nomadic smallmouth can be tough to catch, but when they turn on, there’s no better place to land a true trophy. Despite heavy pressure—Simcoe is within an hour’s drive from several million people—the lake seems to just get better, with multiple, goby-fattened eight-pounders caught and released in 2011. Add in a hardwater fishery that gives up tons of perch, lake trout and whitefish every winter weekend and it’s little wonder Simcoe is the number one all-time favourite hot spot.

There may be other waters with more smallmouth bass, but very few can match Lake Simcoe when it comes to consistently producing big fish from early season to late fall. In fact, a 20-pound-plus tournament limit on Simcoe rarely gets much attention these days—the fish are just that big. For evidence, look no further than last October’s Bass Pro Shops Lake Simcoe Open, when Joe Muszynski and Mark Moran weighed in a record 31½-pound five-fish limit to win the event and a total purse of $45,000. The largest single fish of the tournament, meanwhile, was an 8.05-pound smallmouth.

Early season through the summer finds most anglers fishing in the vicinity of Thorah, Georgina and Strawberry Islands. These are spawning grounds for many of the lake’s smallmouth, although giant fish can be caught here all season long. As the season progresses, many fish also move to deeper off-shore structure and form large schools in 25 to 40 feet of water.

Lake Simcoe’s smallmouth can be very selective when it comes to artificial lures. In the early season and throughout summer, jerkbaits, tube jigs and drop-shot rigs see the most use. By late fall, jigging spoons and heavy drop-shot rigs are best for the deep-water haunts the bass call home at that time of year.

When to fish: Late fall is prime.

Where to fish: Fish deep.

Tip: Drop-shotting on a seven-foot-plus rod is favoured.

In 2009, Largemouth bass; Good concentrations of fish with a solid average size

When to fish: Fall is prime.

Where to fish: Work deep weed points in Cook’s Bay.

Tip: Try a Texas-rigged soft-plastic worm or a jig-and-pig.

Smallmouth bass; Good numbers of fish and the potential for a trophy

When to fish: Late summer.

Where to fish: Fish shallow shoals along the eastern side of the lake between Orillia and Beaverton.

In 2008, Smallmouth bass; The chance for the next Canadian record

When to fish: Early in the season, and the fall.

Where to fish: Use sonar and polarized glasses to locate hard, rock bottom.

Tip: Use tube jigs or rip hard jerkbaits, and be prepared to toss soft stickbaits for followers.

Largemouth bass; Good numbers of three- to five-pounders, with the chance of even bigger fish

When to fish: September to October.

Where to fish: The edges of the last deep weedlines in Cook’s Bay.

Where to fish: The edges of soft-to-hard-bottom transitions in 60 to 70 feet of water.

Tip: Vertical jig Shoal Diggers, Meegs or Badd Boyz with the skirt end of a tube added to the end.

When to fish: Ice-out.

Where to fish: Main-lake points.