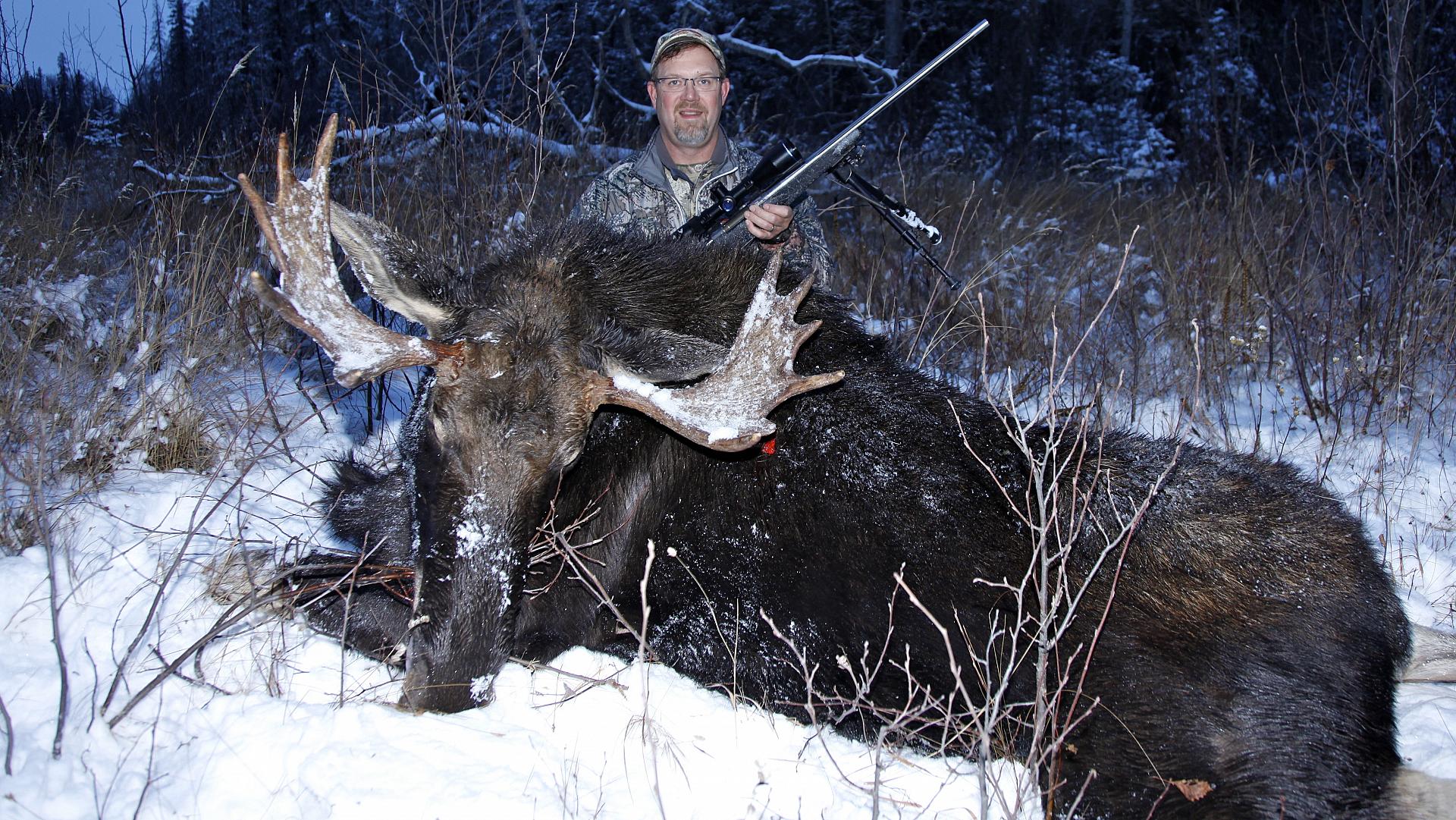 Late-season moose: Where they go after the rut

Finding a prime post-rut hot spot is like hitting the jackpot. Here’s how

Moose have seasonal habitat preferences, so targeting the areas where they like to eat, drink and sleep at particular times of the year will help narrow down your search of large tracts of habitat. And along with wanting a full belly and a nice place to bunk down, mature moose also seek out quiet areas. To find such coveted habitat, look for sign. If there are plenty of fresh moose tracks and no evidence of predator activity, you know you’re in a choice location. Here’s how to refine your search even more in the post-rut period.

When the rut comes to an end, bull moose become more concerned with regular feeding and finding shelter from the elements. After a month of fighting rivals, and showing their intolerance of other bulls, they quickly let bygones be bygones and often hang out in small bachelor groups.

This makes bulls even more difficult to find, however, as now they’re concentrated in key locations rather than evenly spread out across a broader area. If moose densities are less than one per square mile, for example, and four bulls form a tight-knit bachelor group before winter, an awful lot of your hunting territory simply won’t have bulls. That means you have to find the very best habitat, which is no different than targeting fish on the best structure in a lake.

Obviously, finding one of these prime post-rut hot spots is like hitting the jackpot. Even better, such areas will consistently hold moose from one year to the next.

I stumbled onto a late-season moose honey hole one year while ice fishing. I was on a remote lake and noticed flowing water near an inlet creek. On closer inspection, I found an active seep where moose could drink, even after the main waterbodies had frozen over. There was also a dense wall of alder and willow offering a smorgasbord of young twigs. And 100 metres away, just uphill from the lakeshore, old-growth spruce forest provided ideal thermal cover from storms and heavy snowfall.

The area was inundated with tracks, and it didn’t take long for me to find several bulls hanging out together. They’d obviously been there a while, as I didn’t see any tracks beyond their hideaway as I approached the lake. They simply had all they needed in a relatively small area, and wouldn’t leave unless they had to. The next year, I drew a late-season moose tag and took a bull in the same spot on the first day of my hunt.

River valleys are also preferred bull gathering spots, often offering the same good browse, excellent thermal cover and flowing water I found at the lakeside honey hole—perfect for an old moose with limited energy. Google Earth or aerial photos can be a great way to locate these little pockets of paradise. Tracking animals in the snow can also lead you to these prime spots. Just be sure to make a mental note of them, or lock them into your GPS, for the following hunting season.

When it gets cold out, moose look for ways to soak up heat through their black coats to recharge their system. South-facing slopes and the edges of open meadows are great places to search for bulls on cold, sunny days. They’ll typically bed about three-quarters of the way up a ridge, where they can watch for danger approaching from below. They also prefer to have the wind coming down from the top of the ridge to likewise warn them of danger approaching from above. Bulls will bask in the sun in these prime bedding spots from early morning till late afternoon—giving you yet another chance at off-peak hunting success.

When afield, always be on the lookout for signs of moose activity and take note of where and when you found it. Collecting such clues along the way can help unravel the mystery of where moose live, and why they want to be there at different times of the season. And when you pinpoint where they live, you can return when the odds are optimal for hunting success.

No matter what time of the season you’re hunting, for example, keep an eye out for droppings. Patties will show you where moose live in the summer and early fall, when they eat green leaves and vegetation from wetlands. The presence of pellets, on the other hand, reveals where they like to live in the fall and winter when eating dry vegetation. When I’m walking game trails during the rut, I often find piles of old, weathered droppings from the previous winter. I store that info for future hunts when I may be out late in the year and moose are in a wintering pattern.