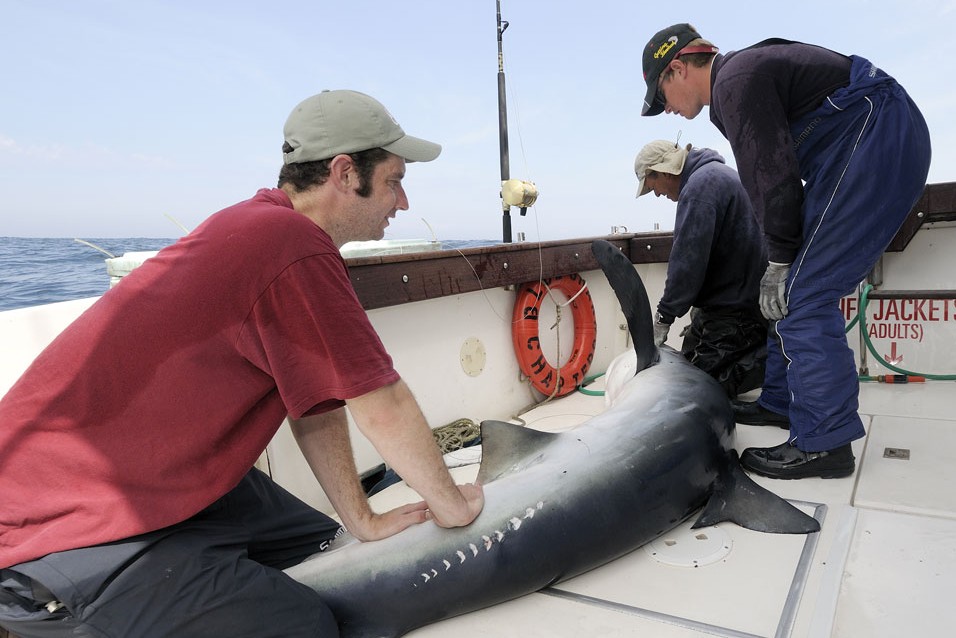 Livin’ on the edge

Now tell me, honestly, how do you ever get excited again about catching 5 and 6 pound walleye, 3 and 4 pound smallmouth bass, even 20 and 30 pound northern pike, muskies, lake trout and salmon after you battle a 12-foot long, 279-pound blue shark for 1 1/2 hours and then hand land it by grabbing the leader inches from its gigantic tooth-filled mouth and pulling it through the back door of the boat in a wild, crazy, frothy mass of Atlantic ocean sea water?

It is all enough to blow your mind.  But that is exactly what Outdoor Canada Managing Editor, Aaron Kylie and I did on Wednesday and Thursday this week when we fished with Captain Art Gaetan.  Art operates Blue Shark Charters out of Halifax, Nova Scotia and for an outdoor writer like myself, he creates a terrible dilemma.  I mean, the last thing I am suppose to be is at a lost for words, but Art left me speechless.

The fishing is that good!

If you don’t believe me, consider this.  Since July 1st, Art and his clients have landed more sharks than the entire charter fleet operating off the eastern coast of the United States.   Aaron and I landed 17 giants on Thursday alone, and we would have caught many more had our behemoth blue not tied us up for 1 1/2 hours!   I mean, this is crazy fishing for giant fish!

And it gives an entire new meaning to the term, toothy critters!

Part of the reason for the phenomenal fishing is that few anglers know how good the shark fishing is off the coast of Nova Scotia … so Art and his clients have it all to themselves to enjoy.  We never saw another boat the entire time we were fishing.  It just may be the last virgin saltwater sport fishery left on earth.

Indeed, the Maritime provinces of Canada (New Brunswick, Nova Scotia, P.E.I. and Newfoundland) are much better known for their blue fin tuna, cod, haddock, mackerel and a whole host of other species, but the reality is this is also the best place on earth to catch monster sharks.  Partially because the Gulf Stream is right next door, blowing up a vast steady stream of warm, tropical water.   When we were fishing this week, the water temperature off the coast was 72 F.

Another reason for the phenomenal fishing is that it is 100-percent catch, tag and release.  Not a single shark is injured or killed.   Indeed, Art works closely with the senior staff at the Bedford Institute of Oceanography in Halifax, so after he hand lands every shark (the bigger brutes are pulled in through the back door) they are measured, carefully tagged and the data is recorded.  So, not only is a day with Art Gaetan the fishing adventure of a lifetime, you’re actually collecting valuable scientific information that is helping to conserve one of the most remarkable animals on the face of the planet.  Talk about a win-win-win.

Then, there is Art himself.  The man is a veritable store house of shark knowledge.  I sincerely doubt there is anyone more experienced or well-informed.  The fish are his passion and I am sure he’d throw anyone overboard if they intentionally injured one of his big babies.  Indeed, after setting out two lines baited with a cocktail comprised of a hunk of herring and half a squid, a holey bucket of frozen ground bait fish (chum) is tied to the boat and allowed to milk out its elixir into the pristine blue salt water.  Then the retired Canadian Navy sonar specialist, who worked on NATO missions all over the world, including the Bosnia crisis, (get him to tell you about the time his Canadian destroyer detected it had been “locked onto” by an enemy missle),  cuts up herring and squid that he carefully ladles overboard.  Eventually, an narrow oily chum trail is laid out over the ocean surface leading directly downstream to the boat.

“A shark can detect a single drop of blood in an Olympic-size swimming pool,” Art tells Aaron and me as our chum pot works its magic.  “Eventually a shark will smell the slick and follow the trail.  Sometimes they’ll swim away from the boat, but I’ve watched them turn right around when they realize they’re going in the wrong direction and then follow it to the boat.”

Of course, with the chum pot oozing out its fishy fragrance and Art tossing chunks of bait overboard, black-back gulls, Shearwaters and ”Jesus birds”, so named because they seemingly walk on water, are attracted to the boat.  Art calls them all “my friends”, for good reason.  They help him detect the sharks.

Indeed, while we’re watching our giant floats trailing behind the boat, Art says, “There is a big fish around the furthest orange float.”  He knows it because the birds appear agitated and lift off the water in unison squawking at whatever is cruising just under the surface.

“There it is,” Art says, pointing a finger right beside the boat.  And Aaron and I look over just in time to see a huge blue shark open its mouth and crush the chum bucket.  It is a scene right out Jaws!

But the fish is incredibly beautiful.  And it is electric blue.

Art grabs the 12 weight fly rod, pitches it over the side of the boat and the shark swirls around to eat it.  But it is cautious and only bumps the hook with its nose.  It does the same again, two or three more times, so Art grabs a small piece of herring and adds it to the hook.  Over the side it goes and the big blue devours it.  My gawd, does it get any more visible or any more exciting than this?

Well, yes, it does, and that is the story Aaron is going to tell you about in the March edition of Outdoor Canada Magazine when he reveals the full story of our trip with Art.

In the meantime, just let me say, if you have never caught a big fish before, give Art a call and you will not be disappointed.  I can say that because when my arms started to ache at about the 20 minute mark into the fight with our big behemoth blue, I passed the rod over to Aaron so I could grab my camera and start shooting photos.  I honestly thought I’d passed the rod to Aaron at about the half way point in the battle.  But I was wrong.  Aaron proceeded to fight the big toothy leviathan for over another hour.  He started wearing his raincoat and bibbed pants, stripped to his sweatshirt and by the time the fish was almost ready to come in, he was down to a soaking wet undershirt and he was yelling for me to take the rod again because his arms were locking up and he could no longer turn the handle on the reel.

Folks, it just does not get any better than this.  Which spoils you for everything else.  I mean, really, have you ever heard of a man-eating walleye?